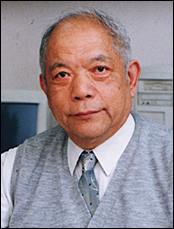 We were saddened to learn the news that Professor Lianshou Liu from Institute of Particle Physics (IOPP), Central China Normal University (CCNU) passed away on December 5, 2009. He was seventy seven year old.

Professor Lianshou Liu was the founding father of nuclear and particle physics at CCNU. He established the Institute of Particle Physics in 1978 and served as its director until a few years ago. IOPP is one of the institutions in China that were first involved in relativistic heavy ion physics two decades ago and continues to be a leading research institution from China in heavy ion physics.

Many people in STAR will remember Professor Liu as one of the earliest STAR collaborators from China. He along with Dr. Tim Hallman helped initiate the TOFp (one tray patch) project to identify particles over a broad kinematic region. The early particle identification effort in STAR paved the way for our eventual full TOF detector upgrade using the Multi-gap Resistive Plate Chamber (MRPC) technology, a joint US-China RHIC-STAR construction project involving six Chinese Institutions including IOPP. The STAR full TOF upgrade project has been successfully completed in September 2009.

Professor Liu’s dedication to heavy ion physics research has never waned even in the last month of his life. His health deteriorated considerably in early 2009. However, he continued to discuss physics when colleagues visited him at the hospital and he held weekly meetings with his students and post-docs in his hospital ward. He has been an inspiration for many students interested in science at IOPP and a formidable researcher/competitor to many colleagues.

Professor Liu was an outstanding educator as well. He has won many teaching awards including the national teacher award by the Chinese Education Ministry. Many of his students from IOPP become leading researchers who are all over the world. He showed many of us that doing physics was not only exciting and challenging, but also a lot of fun. He will be missed.