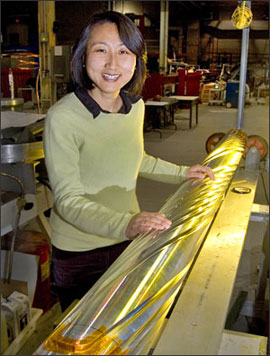 The RHIC community is pleased to find out that Mei Bai, a physicist in the BNL Collider-Accelerator Department (CAD), is a recipient of one of the first ACFA/IPAC accelerator prizes. She shares this honor with Steve Myers of CERN and Jie Wei of Tsinghua University. Mei has been at BNL since 1999, and has played a leading role in the polarized proton program at RHIC. She was Run Coordinator for four RHIC runs as a polarized proton collider, particularly the most recent one where she led the first operation of RHIC with polarized proton collisions at 500 GeV center-of-mass energy.

The ACFA/IPAC'10 Prizes Selection Committee, under the Chairmanship of Won Namkung, Pohang Accelerator Laboratory (PAL), Korea, met on Wednesday, 20 January 2010 and decided the following prizes, which will be awarded during IPAC'10 in Kyoto from 23 to 28 May:

An Achievement Prize for outstanding work in the accelerator field with no age limit:

Citation:"for his numerous outstanding contributions to the design, construction, commissionimg, performance optimization, and upgrade of energy-frontier colliders - in particular ISR, LEP, and LHC - and to the wider development of accelerator science"

A Prize for an individual, having made significant, original contributions to the accelerator field with no age limit:

Citation: "for his exceptionally creative contributions to the design, construction and commissioning of circular accelerators, in particular RHIC, SNS, LHC, as well as the design of CSNS, and for numerous significant developments in the field of beam dynamics"

A Prize for an individual, in the early part of his or her career, having made a recent significant, original contribution to the accelerator field:

Citation: "for her significant contributions to spin dynamics and polarized proton acceleration in circular accelerators - in particular AGS and RHIC, and to successful polarized proton beam collisions at 500 GeV centre of mass"