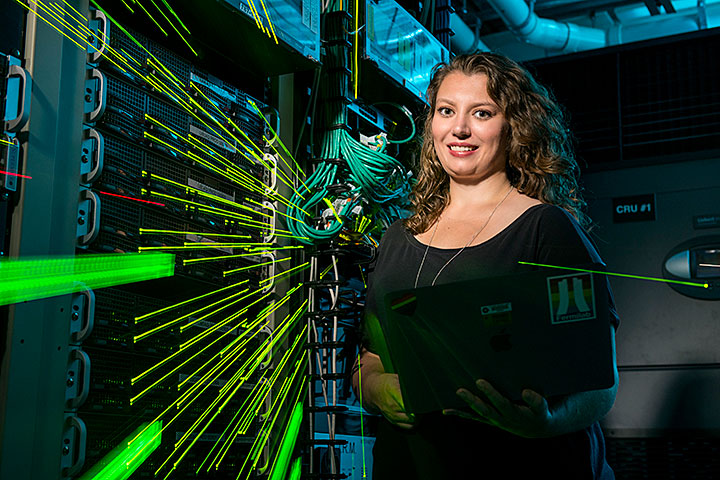 UPTON, NY—Kirsty Duffy, a Lederman Fellow at Fermi National Accelerator Laboratory (Fermilab), says neutrinos are the most interesting particles in the universe. As a recipient of the Leona Woods Distinguished Postdoctoral Lectureship Award, she’ll have a chance to make her case in two talks she’ll deliver at the U.S. Department of Energy’s Brookhaven National Laboratory this November.

The award was established by Brookhaven Lab’s Physics Department in honor of renowned physicist Leona Woods to celebrate the scientific accomplishments of outstanding female physicists and physicists from other under-represented minority groups, including the LGBTQ community—and to promote diversity and inclusion in the department. The award includes an honorarium of $1,000 and an invitation to give a general-interest colloquium and a technical talk during a weeklong stay at Brookhaven Lab.

“I am really excited and honored to have been chosen for the Leona Woods Lectureship Award, particularly because it honors a pioneer of both my subfield of physics, and women in physics as a whole,” Duffy said. “I can’t imagine what it must have been like as a woman in physics in the 1950s and 60s. We’ve made huge strides in terms of equity and diversity in physics since then, but it’s still incredibly important work. I’m glad Brookhaven has this focus on under-represented groups in our field, and I still can’t believe they’ve chosen me for such a prestigious award!”

Duffy is currently a member of two experiments that seek to understand the behavior of neutrinos, the most abundant matter particles in the universe. “Neutrinos are absolutely everywhere, but they almost never interact with anything,” she said. “Every second, about 100 million neutrinos go through your thumbnail, but in your entire life only a couple will ever actually interact with (or ‘hit’) one of the atoms that makes up your body.

“The reason neutrinos are the most interesting particle is because there are actually three types (electron, muon, and tau), and they do something really crazy—change into each other!”

The experiments Duffy works on—MicroBooNE (which is up and running) and DUNE (which is not yet built)—are designed to track this identity-changing behavior, known as neutrino oscillation. Scientists from Brookhaven Lab have made contributions to these and many other neutrino experiments.

Understanding neutrino oscillation and whether it happens in the same way for neutrinos, which are matter, and antineutrinos (antimatter), might help answer one of the most puzzling questions in physics: “why the universe is made only of matter, even though we think that both matter and antimatter were created in equal amounts in the Big Bang,” Duffy said.

“We have made similar measurements with other particles and seen some differences between matter and antimatter, but nowhere near enough to explain the all-matter universe we live in, so people are really excited to see this result with neutrinos,” she said. “The work I did for my Ph.D., using Japan’s T2K experiment, showed the first hints that there is a difference between neutrinos and antineutrinos, so it’s a very exciting time!”

“I first got interested in neutrino physics because it’s such a young field. The final confirmation of neutrino oscillation only came in 2001, and was awarded the Nobel Prize in 2015, so it feels like there’s a lot to explore, contribute, and learn.”

Kirsty Duffy earned her undergraduate degree (2012) as well as a Ph.D. in particle physics (2016) at the University of Oxford and continued postdoctoral research there until June 2017. Her Ph.D. thesis on neutrino and antineutrino oscillation at the T2K experiment won the Springer Thesis Award (2017).  She joined Fermilab in August 2017 as a postdoctoral Lederman Fellow—a program intended to attract exceptional postdoctoral candidates who have demonstrated outstanding ability in research who also have a strong interest in education and outreach. She has been active in various efforts to increase representation of and networking opportunities for young people and women in her research collaborations.

These talks are open to the public. All visitors to the Lab age 16 and older must show a valid photo ID.