Teams of college students at Brookhaven and other U.S. Department of Energy national laboratories will compete to defend and maintain the service of a simulated energy infrastructure 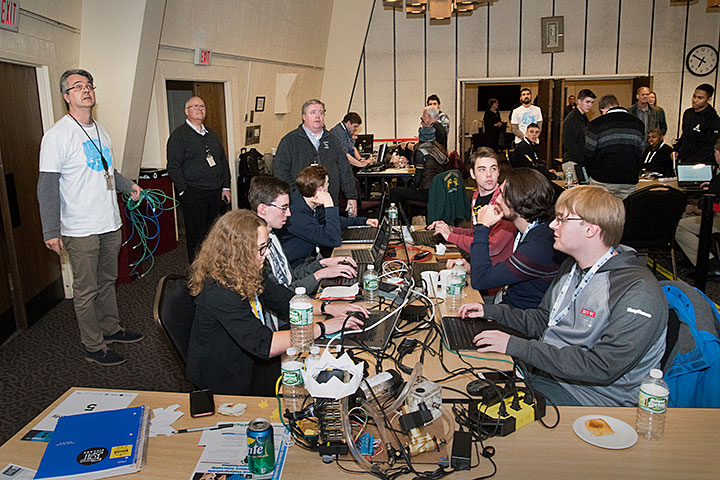 Last year, Brookhaven Lab hosted five teams participating in the U.S. Department of Energy's CyberForce Competition, including students from the University of Maryland, Baltimore County, pictured above. For this year's competition, Brookhaven will welcome seven teams.

UPTON, NY—The U.S. Department of Energy (DOE) will host its fifth CyberForce Competition™ on November 16. The event, held at 10 of the DOE’s National Laboratories across the United States, will challenge 105 college teams to defend a simulated energy infrastructure from cyber-attacks.

During the competition, teams will compete to defend their simulated infrastructure from attacks by adversarial “red teams” composed of industry professionals, all while maintaining service for their “green team” customers, played by volunteers. A national winner, as well as winners for each laboratory site, will be announced following the competition.

This year, the Department of Energy is also hosting a CyberForce Competition Professional Pilot at Argonne National Laboratory to coincide with the collegiate competition, in which experienced cyber defenders will test their cyber prowess in a similar cyberdefense simulation.

“The nation’s energy infrastructure is becoming increasingly reliant on digital controls and communications,” said Amanda Joyce, CyberForce Competition director and cybersecurity analysis group lead at Argonne National Laboratory. “The idea behind the competition is to build a strong workforce to defend this infrastructure from cyberattacks.”

The competition is co-funded by the DOE’s Office of Cybersecurity, Energy Security, and Emergency Response (CESER); Office of Science; Office of the Chief Information Officer; Office of Energy Efficiency & Renewable Energy; and the National Nuclear Security Administration.

“The collegiate CyberForce Competition is designed to expose cybersecurity undergraduates to the unique challenges of an operational technology environment,” Karen S. Evans, Assistant Secretary for CESER, said, “there are no better ambassadors to educational institutions than the DOE National Labs, who have a notable history of building relationships within their local academic institutions and communities.”

The 2019 event presents teams with the challenge of not only defending one of four system scenarios—an energy company’s solar generation facility, electric substation, data center, or manufacturing plant—but also communicating with the other three infrastructures to monitor and maintain the integrity of the system as a whole.

“This year’s infrastructure is multitiered, distributed throughout the participating labs,” said Michael DePhillips, a cybersecurity researcher in Brookhaven’s Nonproliferation and National Security Department. “Each lab has one or two of the following infrastructures: a high-performance computing data center, a manufacturing facility, a solar energy generation facility, and/or an energy distribution substation. Brookhaven’s mock high-performance computing datacenter interacts with the other virtual facilities, providing a simulation of interdependence that is typical of the DOE complex. This sophistication gives the teams a realistic environment to configure, communicate in, and defend. There is a lot to be learned in classrooms; however, there is no substitute for this level of simulation to test knowledge and help develop spontaneous response skills, teamwork, and dexterity.”

The scenarios include simulated industrial control system components, real-world anomalies and constraints, and interaction with users of the systems. Each team is scored on its ability to safeguard the infrastructure against attacks while ensuring the usability of the system. “Out of the box” or innovative ideas and defenses are also rewarded in the scoring.

"It is one thing to do classroom assignments and be surrounded by phenomenal instructors and classmates, but there is a gap between education and application,” said Christopher Vasquez, who competed as part of a team from Columbia University last year. “That’s where coming to Brookhaven and participating in this competition comes in.”

The event aims to attract more promising talent to the cybersecurity field by offering memorable hands-on experiences and highlighting the crucial role this field plays in preserving national energy security.

For more information about the competition, visit https://cyberforcecompetition.com/.