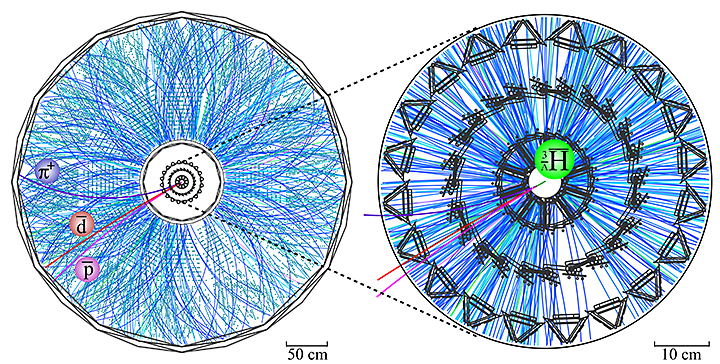 Inner vertex components of the STAR detector at the Relativistic Heavy Ion Collider (righthand view) allow scientists to trace tracks from triplets of decay particles picked up in the detector's outer regions (left) to their origin in a rare "antihypertriton" particle that decays just outside the collision zone. Measurements of the momentum and known mass of the decay products (a pi+ meson, antiproton, and antideuteron) can then be used to calculate the mass and binding energy of the parent particle. Doing the same for the hypertriton (which decays into different "daughter" particles) allows precision comparisons of these matter and antimatter varieties.

UPTON, NY—New results from precision particle detectors at the Relativistic Heavy Ion Collider (RHIC) offer a fresh glimpse of the particle interactions that take place in the cores of neutron stars and give nuclear physicists a new way to search for violations of fundamental symmetries in the universe. The results, just published in Nature Physics, could only be obtained at a powerful ion collider such as RHIC, a U.S. Department of Energy (DOE) Office of Science user facility for nuclear physics research at DOE’s Brookhaven National Laboratory.

The precision measurements reveal that the binding energy holding together the components of the simplest “strange-matter” nucleus, known as a “hypertriton,” is greater than obtained by previous, less-precise experiments. The new value could have important astrophysical implications for understanding the properties of neutron stars, where the presence of particles containing so-called “strange” quarks is predicted to be common.

The second measurement was a search for a difference between the mass of the hypertriton and its antimatter counterpart, the antihypertriton (the first nucleus containing an antistrange quark, discovered at RHIC in 2010). Physicists have never found a mass difference between matter-antimatter partners so seeing one would be a big discovery. It would be evidence of “CPT” violation—a simultaneous violation of three fundamental symmetries in nature pertaining to the reversal of charge, parity (mirror symmetry), and time.

“Physicists have seen parity violation, and violation of CP together (each earning a Nobel Prize for Brookhaven Lab), but never CPT,” said Brookhaven physicist Zhangbu Xu, co-spokesperson of RHIC’s STAR experiment, where the hypertriton research was done. 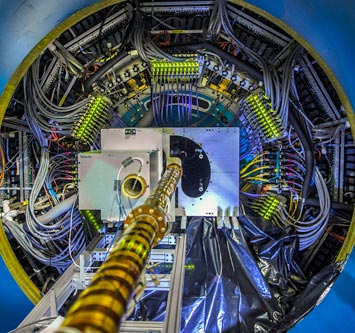 The Heavy Flavor Tracker at the center of the STAR detector.

But no one has looked for CPT violation in the hypertriton and antihypertriton, he said, “because no one else could yet.”

The previous CPT test of the heaviest nucleus was performed by the ALICE collaboration at Europe’s Large Hadron Collider (LHC), with a measurement of the mass difference between ordinary helium-3 and antihelium-3. The result, showing no significant difference, was published in Nature Physics in 2015.

Spoiler alert: The STAR results also reveal no significant mass difference between the matter-antimatter partners explored at RHIC, so there’s still no evidence of CPT violation. But the fact that STAR physicists could even make the measurements is a testament to the remarkable capabilities of their detector.

The simplest normal-matter nuclei contain just protons and neutrons, with each of those particles made of ordinary “up” and “down” quarks. In hypertritons, one neutron is replaced by a particle called a lambda, which contains one strange quark along with the ordinary up and down varieties.

Such strange matter replacements are common in the ultra-dense conditions created in RHIC’s collisions—and are also likely in the cores of neutron stars where a single teaspoon of matter would weigh more than 1 billion tons. That’s because the high density makes it less costly energy-wise to make strange quarks than the ordinary up and down varieties.

For that reason, RHIC collisions give nuclear physicists a way to peer into the subatomic interactions within distant stellar objects without ever leaving Earth. And because RHIC collisions create hypertritons and antihypertritons in nearly equal amounts, they offer a way to search for CPT violation as well.

But finding those rare particles among the thousands that stream from each RHIC particle smashup—with collisions happening thousands of times each second—is a daunting task. Add to the challenge the fact that these unstable particles decay almost as soon as they form—within centimeters of the center of the four-meter-wide STAR detector.

Fortunately, detector components added to STAR for tracking different kinds of particles made the search a relative cinch. These components, called the “Heavy-Flavor Tracker,” are located very close to the STAR detector’s center. They were developed and built by a team of STAR collaborators led by scientists and engineers at DOE’s Lawrence Berkeley National Laboratory (Berkeley Lab). These inner components allow scientists to match up tracks created by decay products of each hypertriton and antihypertriton with their point of origin just outside the collision zone.

“What we look for are the ‘daughter’ particles—the decay products that strike detector components at the outer edges of STAR,” said Berkeley Lab physicist Xin Dong. Identifying tracks of pairs or triplets of daughter particles that originate from a single point just outside the primary collision zone allows the scientists to pick these signals out from the sea of other particles streaming from each RHIC collision.

“Then we calculate the momentum of each daughter particle from one decay (based on how much they bend in STAR’s magnetic field), and from that we can reconstruct their masses and the mass of the parent hypertriton or antihypertriton particle before it decayed,” explained Declan Keane of Kent State University (KSU). Telling the hypertriton and antihypertriton apart is easy because they decay into different daughters, he added.

“Keane’s team, including Irakli Chakeberia, has specialized in tracking these particles through the detectors to ‘connect the dots,’” Xu said. “They also provided much needed visualization of the events.”

As noted, compiling data from many collisions revealed no mass difference between the matter and antimatter hypernuclei, so there’s no evidence of CPT violation in these results.

But when STAR physicists looked at their results for the binding energy of the hypertriton, it turned out to be larger than previous measurements from the 1970s had found.

The STAR physicists derived the binding energy by subtracting their value for the hypertriton mass from the combined known masses of its building-block particles: a deuteron (a bound state of a proton and a neutron) and one lambda.

“The hypertriton weighs less than the sum of its parts because some of that mass is converted into the energy that is binding the three nucleons together,” said Fudan University STAR collaborator Jinhui Chen, whose PhD student, Peng Liu, analyzed the large datasets to arrive at these results. “This binding energy is really a measure of the strength of these interactions, so our new measurement could have important implications for understanding the ‘equation of state’ of neutron stars,” he added.

For example, in model calculations, the mass and structure of a neutron star depends on the strength of these interactions. “There’s great interest in understanding how these interactions—a form of the strong force—are different between ordinary nucleons and strange nucleons containing up, down, and strange quarks,” Chen said. “Because these hypernuclei contain a single lambda, this is one of the best ways to make comparisons with theoretical predictions. It reduces the problem to its simplest form.”

This work was funded by the DOE Office of Science and by funders of the STAR collaboration listed here. The team expressed gratitude to the National Energy Research Scientific Computing Center at Berkeley Lab (another DOE Office of Science user facility) and the Open Science Grid consortium for providing resources and support.