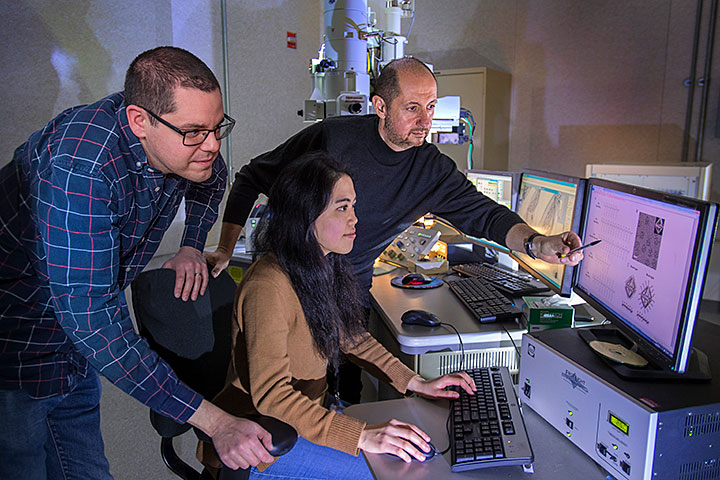 (Left to right) James Byrnes, Christine Wang, and Oleg Gang at Brookhaven Lab's Center for Functional Nanomaterials. Here, they used transmission electron microscopes to image 3-D DNA nanostructures (shown on the computer screen). Through these imaging studies and other experiments, they observed that the structure of these "DNA origami" remained intact after being coated with specifically designed molecules called peptoids and placed in various types of physiological conditions (e.g., solutions containing enzymes) relevant to biomedical applications. In follow-on demonstrations conducted in collaboration with Stanford University, they explored how their "peptoid-coated DNA origami" could be used for anti-cancer drug delivery.

UPTON, NY—Scientists have designed and synthesized chains of molecules with a precise sequence and length to efficiently protect 3-D DNA nanostructures from structural degradation under a variety of biomedically relevant conditions. They demonstrated how these “peptoid-coated DNA origami” have the potential to be used for delivering anti-cancer drugs and proteins, imaging biological molecules, and targeting cell-surface receptors implicated in cancer. Their method for designing peptoids to stabilize DNA origami in physiological environments is described in a paper published in the Proceedings of the National Academy of Sciences the week of Mar. 9.

Similar to the Japanese art of paper folding, DNA origami is the folding of long, flexible DNA chains into desired shapes at the nanoscale (billionths of a meter) by “stapling” different parts of the chain with the complementary base pairs of short DNA strands. These programmable and precisely controlled nanoscale architectures could be beneficial for many biomedical applications, including the targeted delivery of drugs and genes to desired tissues or cells, imaging of biological processes inside the body, and biosensing for disease detection or health monitoring. However, enabling such applications will require solutions for protecting DNA origami structures in complex biological fluids and enabling new functions that are not inherent to DNA.

“One of the limiting factors in applying the structure and shape benefits of DNA origami to nanomedicine is that, placed inside the human body, the DNA nanostructure would easily be digested by enzymes or degraded in response to changes in solution composition or pH level,” explained first author Shih-Ting (Christine) Wang, a postdoc in the Soft and Bio Nanomaterials Group of the Center for Functional Nanomaterials (CFN) at the U.S. Department of Energy’s (DOE) Brookhaven National Laboratory. “In this research, we synthesized biocompatible molecules called peptoids with a well-defined molecular sequence composition and length. We coated octahedral-shaped DNA origami—which has high mechanical stability and a large open space for carrying nanoscale cargo such as small-molecule anti-cancer drugs—with these peptoids. Our demonstrations showed that the peptoid coatings efficiently protected the DNA origami in various physiological conditions and supported the addition of different chemical functionalities for biomedical applications.”

Peptoids resemble peptides, or short chains of amino acids. However, in peptoids, the side chains (chemical groups attached to the main chain or backbone of the molecule) are attached to nitrogen rather than to carbon. Moreover, peptoids are more flexible, owing to the lack of hydrogen bonds in the backbone. This flexibility can be leveraged to control how the peptoids bind to the DNA origami.

“Our goal was to make a minimalistic coating that would not add bulk to the origami but at the same time be efficient enough to offer protection, solubility, and compatibility with different biofunctions,” said corresponding author Oleg Gang, leader of the CFN Soft and Bio Nanomaterials Group and a professor of chemical engineering and of applied physics and materials science at Columbia Engineering. “If the coated origami becomes bulky, its shape and how it interacts with and accommodates other biomolecules and origami would be affected, introducing a variety of complications.” 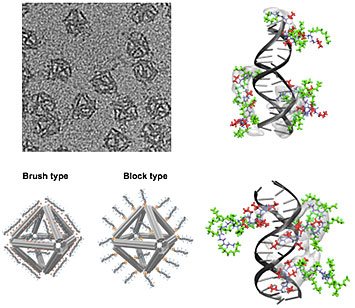 Wang and Gang, assisted by a collaborator from Imperial College London, used facilities at Lawrence Berkeley National Laboratory’s Molecular Foundry (MF) to synthesize two kinds of peptoid architectures for the protection of DNA origami: brush type and block type. Both architectures have a DNA binding domain (positively charged part that binds to the negatively charged DNA) and a water-soluble domain (part that ensures DNA is surrounded by water molecules, which are required for stabilization). The brush-type architecture alternates between these two domains, while the block-type architecture clusters them to form distinct “blocks.”

To determine which type was better at providing protection, the scientists studied the binding between two-stranded (duplex) DNA and peptoids. Experiments with fluorescent dye (which binds to the DNA) showed that a specific brush-type architecture was most efficient at stabilizing duplex DNA coated with peptoids at high temperature. A collaborator at RMIT University in Australia simulated the molecular-level DNA-peptoid interactions to understand why.

“We believe that the alternating structure achieves a balance, in that some pieces sit within the groove of the DNA double-helix structure to confer protection, while other pieces stick out to interact favorably with water,” said Wang. “An optimal configuration is the brush type with 12 DNA-binding and 12 water-soluble groups.”

Guided by these studies, the team investigated the structural stability of the peptoid-coated DNA origami in several types of physiologically relevant conditions: in a solution containing a low concentration of positively charged magnesium (Mg) ions, in a solution containing a DNA-specific nuclease (type of enzyme), and incubated in cell culture media (containing both nucleases and Mg ions at low concentration). Typically, a high Mg-ion concentration is required to stabilize DNA origami by reducing the repulsion of DNA-DNA negative charges, but physiological fluids contain much lower concentrations.

For their investigations, they used a combination of experimental techniques: agarose gel electrophoresis, a method for separating DNA fragments (or other macromolecules) on the basis of their charge and size; transmission electron microscopy imaging and dynamic light scattering at the CFN; and real-time small-angle x-ray scattering at the Life Science X-ray Scattering (LiX) beamline of Brookhaven’s National Synchrotron Light Source II (NSLS-II). The results indicated that the structure of the origami had remained intact after it was coated with specifically designed peptoids and placed in the different physiological conditions. 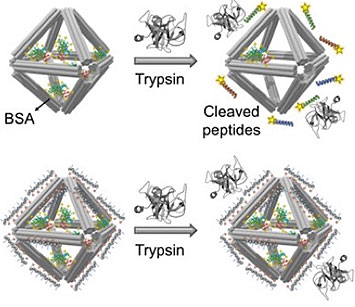 Following these experiments, the scientists conducted a series of demonstrations in collaboration with the Bertozzi Group at Stanford University to explore how the peptoid-coated origami could be used in biomedical applications. For example, they loaded the chemotherapy drug doxorubicin into the coated origami. Doxorubicin is one of the commonly administered drugs to patients with HER2-positive breast cancer, in which an overexpression of the HER2 protein (a receptor on breast cells) causes cells to divide and grow uncontrollably. Over 48 hours, the coated origami released less of the doxorubicin than its noncoated counterpart, as measured through the intensity of the drug’s intrinsic fluorescence.

“The ultimate goal is to be able to modulate the release rate during the drug delivery process to control biological and toxic effects,” explained Wang.

In a second nanocargo demonstration, they investigated whether proteins could be delivered in a similar way. They encapsulated a cow-derived protein (attached to fluorescent molecules for visualization) inside the coated origami in the presence of the protein-digesting enzyme trypsin. Digestion of this encapsulated protein by trypsin was reduced and slowed due to a combination of the DNA origami itself and the peptoid coating. 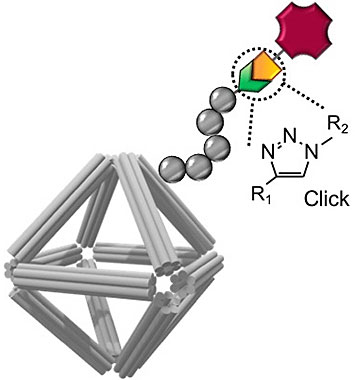 A schematic showing how "alkyne" reactive groups incorporated into peptoid sequences coating the DNA origami can conjugate with fluorophore-labeled nanocargo (such as trastuzumab) that have been modified with "azide" chemical groups (red shape). Through alkyne-azide click-chemistry reactions, the surface of peptoid-coated DNA origami can be functionalized.

In a final demonstration, they functionalized the surface of the peptoid-coated DNA origami with trastuzumab. More commonly known by the brand name Herceptin, trastuzumab is an antibody that targets HER2 receptors. Upon binding to these receptors, trastuzumab blocks the cancer cells from receiving the chemical signals they need to grow. They achieved the surface functionalization by adding chemical groups to specific sites on the trastuzumab molecule and into the peptoid sequences. Through “click chemistry,” these groups selectively react to form covalent bonds (akin to clicking a seatbelt buckle).

Wang was awarded funding through Brookhaven’s Technology Maturation Program to further develop this technology on the basis of a pitch she developed as a participant in the second entrepreneurship training workshop hosted by Brookhaven’s Office of Technology Transfer in April 2019. Brookhaven’s Intellectual Property Legal Group recently submitted a provisional patent application for the peptoid design methodology to the U.S. Patent and Trademark Office.

The CFN, MF, and NSLS-II are all DOE Office of Science User Facilities. The CFN and MF are both DOE Nanoscale Science Research Centers. The research was in part supported by the Laboratory Directed Research and Development Program at Brookhaven.