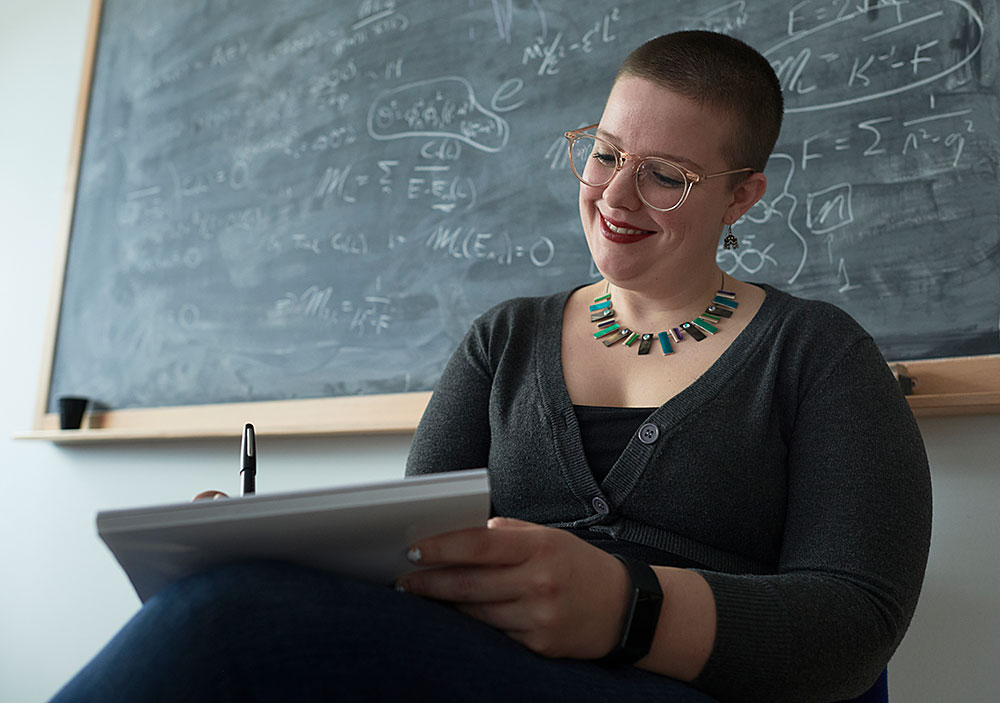 UPTON, NY—Dorota Grabowska, a senior fellow in the department of theoretical physics at CERN, Europe’s particle physics laboratory, has been named a recipient of the Leona Woods Distinguished Postdoctoral Lectureship Award. The award was established by the physics department at the U.S. Department of Energy’s Brookhaven National Laboratory in honor of renowned physicist Leona Woods to celebrate the scientific accomplishments of outstanding female physicists and physicists from other under-represented minority groups, including the LGBTQ community—and to promote diversity and inclusion in the department. Grabowska will receive an honorarium of $1,000 and will give a general-interest colloquium and a technical talk about her work via videoconference this October.

“It is particularly meaningful to me to be giving this colloquium as part of an award that acknowledges the importance of diversity and inclusion in physics,” Grabowska said. “It is no secret that there is a severe under-representation of women and people of color in physics, as well as of people who are out and visible as members of the LGBTQ community, among others. There is still much that needs to be done, but such awards offer those from traditionally underrepresented and marginalized communities the opportunity to shine and to claim that we do belong.”

Grabowska is a theoretical physicist who is working to understand the mathematical basis of particle physics, and how that affects theories that are strongly coupled, or interacting. This includes theories like quantum chromodynamics (QCD), where interactions among subatomic particles at short distances are mediated by the strong force. The strong force binds together fundamental particles known as quarks to form larger, more-familiar particles, such as protons and neutrons. Grabowska is interested in how the basic building blocks of matter interact, and also how novel strong interactions may be responsible for generating dark matter—matter existing alongside our own but invisible to the detectors used to study particles we know.

Grabowska works especially closely with what is known as lattice field theory, developing tools to extract meaningful information from calculations using “lattice regularization.” This process uses a 4-D lattice of spacetime: three physical dimensions plus time to visualize relativistic effects—the results of particles moving close to the speed of light.

“This approach allows us to control all the infinites, or divergences, that can appear in the theory,” she said. Instead of having an infinite number of degrees of freedom—an infinite number of values in the final calculation that are free to vary—the lattice shows data that now is finite, she explained. “And, because there are no continuous variables, theoretical predictions can sometimes be extracted from computer-based numerical simulations.”

She also is working to develop new tools for calculating lower-energy observables in nuclear physics—such as the masses of atomic nuclei—with quantifiable uncertainties.

“Simply put, I aim to guide the development of tools for probing aspects of nature not yet accessible,” she said.

For the last two years, Grabowska has also been working to understand the nature of dark matter and how to detect it directly. She has focused on dark sectors that have strong interactions, which generate large composite states that are similar to nuclei or neutron stars. Depending on the specifics of interactions in the dark sector, the mass of these states, which are candidates for dark matter, can range over forty orders of magnitude—about the ratio between the mass of the Earth and the mass of the single human red blood cell.

“Due to this large range of masses, there is not a single detection strategy that works for all of these candidates,” she said. “Instead, we need to cast a wide net, using both terrestrial and astrophysical constraints. This is a relatively recent idea and thus there is a large amount of work to be accomplished in this direction.”

One of the first seminars Grabowska ever gave was at Brookhaven Lab back in November of 2015. She is excited to give her first-ever colloquium, albeit virtually.

“I feel honored to have been selected to talk about my work and also to demonstrate the importance of inclusion in physics,” she said.

The Leona Woods Distinguished Postdoctoral Lectureship Award, established in 2017, is named for Leona Woods, one of a small number of female physicists who contributed to the Manhattan Project, who later served as a visiting physicist at Brookhaven Lab from 1958 to 1962. Leona Woods Lectureship awardees will be selected twice a year. Nominees must be within seven years of earning their doctoral degree and have achievements in broadly defined areas of interest to the Brookhaven Lab Physics Department. These include astrophysics, cosmology, and experimental and theoretical nuclear and high-energy physics. To submit nominations, please contact Peter Steinberg (Chair, Leona Woods Lecture Committee), peter.steinberg@bnl.gov, or Sally Dawson (Chair, Physics Department Diversity Committee), sdawson@bnl.gov. Next deadline for nominations: November 15, 2020.