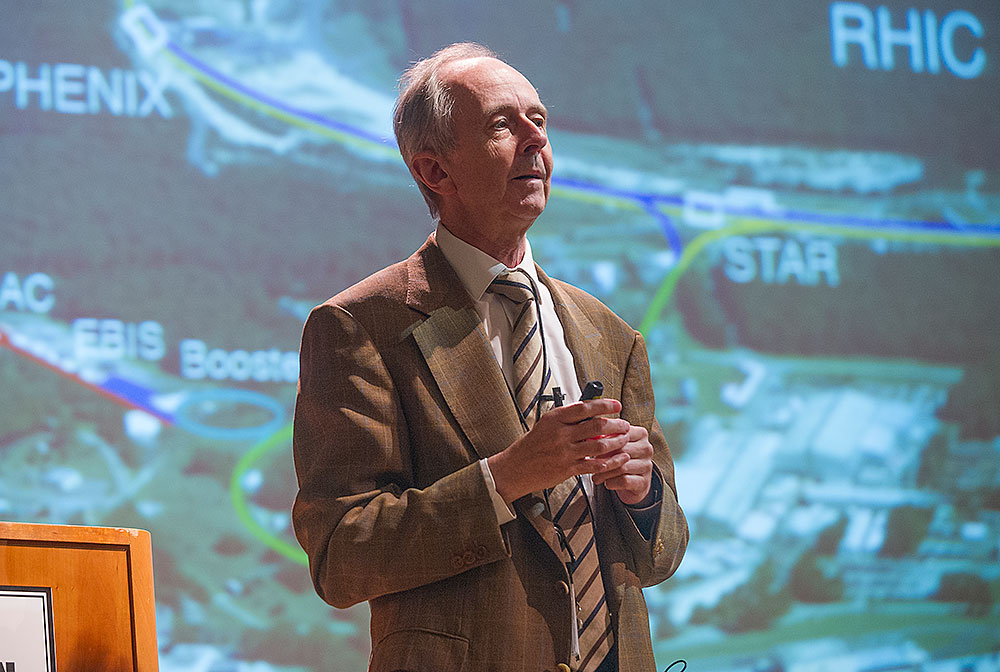 UPTON, NY—Berndt Mueller, Associate Laboratory Director for Nuclear and Particle Physics at the U.S. Department of Energy’s (DOE) Brookhaven National Laboratory, has been awarded the 2021 Herman Feshbach Prize in Theoretical Nuclear Physics for his contributions toward understanding the matter that filled the universe a mere fraction of a second after its birth nearly 14 billion years ago.

Mueller said it is both surprising and gratifying to be named the eighth recipient of the Feshbach Prize since its inception in 2014. The cash prize, awarded by the American Physical Society (APS), is named for Herman Feshbach, a leading and longtime Massachusetts Institute of Technology nuclear theorist.

“Being among a small group of people who are thought by their peers worthy of getting this prize is a rewarding feeling because it gives the sense that the work is being appreciated,” Mueller said, adding that his research was made possible through collaboration with colleagues, students, postdocs and others. “It is a recognition of work that is done by various small teams of people and scientists who’ve made important contributions. What’s special is that I’ve been a member of all of those. Merit goes to my collaborators and colleagues and to the fantastic group of people here at Brookhaven who actually do the measurements and generate the data.”

Mueller’s research, in his capacity as a professor of physics at Duke University, is intimately tied to data generated at Brookhaven Lab’s Relativistic Heavy Ion Collider—a DOE Office of Science user facility for nuclear physics research.

To explore questions of the origins of matter, Mueller focused on quarks and gluons, the fundamental building blocks of the protons and neutrons that make up the nuclei of atoms – and therefore nearly all the visible matter in our universe. As a theoretical nuclear physicist at Duke, years before RHIC started operating, Mueller performed many of the complex and intricate calculations that predicted the creation and behavior of quark-gluon plasma (QGP), a mixture of quarks and gluons similar to what scientists believe existed a fraction of a second after the Big Bang. He theorized an approach for experiments using hadrons, subatomic particles made of quarks held together by gluons.

“If you look at the particles that contain quarks and gluons, you’re probably going to learn a lot about how they were formed and what the matter was like that ultimately emitted those particles,” he said.

But for predictions to be corroborated, lots of data is needed, he said. That’s where RHIC comes in.

The 2.4-mile collider smashes atomic nuclei into each other at high energies, recreating the incredibly hot conditions of the universe’s creation. The collisions last only a fleeting moment, allowing a glimpse of tiny specs of QGP before it cools. Figuring out what happens in the collisions and understanding what the matter being created in the process looks like requires deducing what produced it and how it was produced, Mueller said.

That detective work with the help of RHIC data verified his approach.

“The original predictions made 20 years ago have been verified to a remarkable extent,” Duke University Physics chair Steffen Bass wrote in his nomination of Mueller. “This work […] laid the foundation for major experimental programs” at Brookhaven and the Large Hadron Collider at CERN, Europe’s particle physics research laboratory, Bass added.

Mueller’s research has also helped explain findings from recent collider experiments, including ones of the behavior of QGP. It showed that the plasma, a near perfect liquid, is made up of individual quarks.

Mueller joined Brookhaven Lab as Associate Laboratory Director for Nuclear and Particle Physics in 2013, becoming responsible for planning and ultimately executing the RHIC research program in nuclear physics along with other programs in high energy particle physics.

“I thought it was a really good opportunity to not only be a consumer of the data that come out of RHIC, but also to really influence the scientific program that produces these data and make sure the capabilities of that facility are exploited to the fullest,” he said. “Working with the incredibly bright and capable scientists here at Brookhaven is a tremendous reward. This is one of the best groups of people in the world who know how to operate and run a particle collider.”

Mueller has also helped lay the foundation for the Electron-Ion Collider, which will collide electrons with protons and nuclei to produce snapshots of those particles’ internal structure. The EIC will reuse one of RHIC's two ion storage rings for collisions of electrons with ions, and track those collisions with one or more detectors.

“The fact that we were successful in bringing that facility to Brookhaven is quite rewarding as well,” he said. Mueller received his Ph.D. in Theoretical Physics from Goethe University in Frankfurt, Germany (1973), and completed his postdoctoral studies at Yale University and the University of Washington. He moved to the United States in 1990 to take a faculty position in the physics department at Duke University before joining Brookhaven Lab to lead the Nuclear and Particle Physics Directorate in 2013. He has held a joint appointment at Duke and Brookhaven Lab, but will return to teaching and researching at the university full time at the end of the year.

He is a Fellow of the American Physical Society and of the American Association for the Advancement of Science. He received the Röntgen Prize (1976), the Senior U.S. Scientist Award of the A. v. Humboldt Foundation (1998), and the Jesse Beams Award of the Southeastern Section of the APS (2007).

Citation: “For seminal theoretical contributions to the identification of quark-gluon plasma signatures, focused on predictions of hadronic observables of the partonic state that inform the understanding of thermalization, fluctuations, flow observables, and hadronic spectra.”