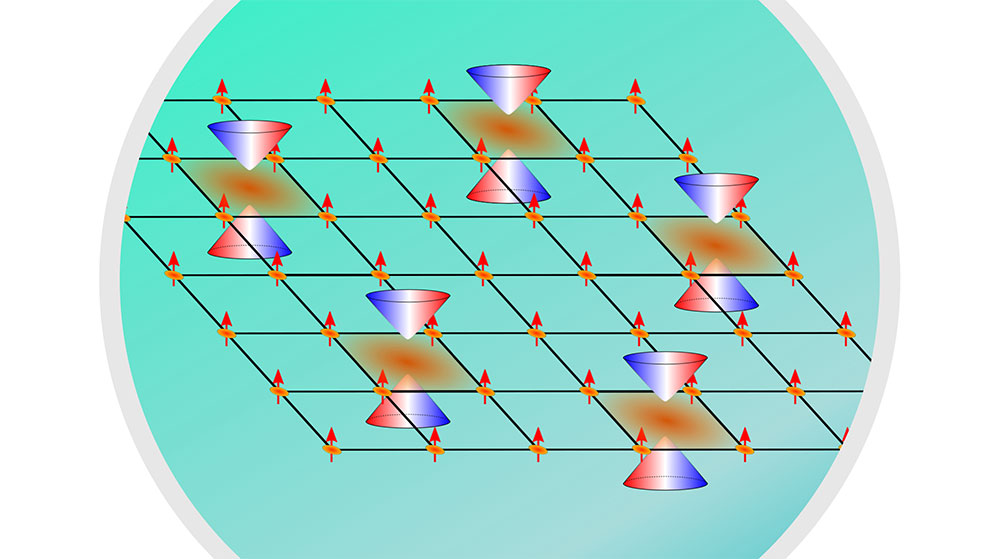 An illustration depicting a topological surface state with an energy band gap (an energy range where electrons are forbidden) between the apices of the top and corresponding bottom cones (allowed energy bands, or the range of energies electrons are allowed to have). A topological surface state is a unique electronic state, only existing at the surface of a material, that reflects strong interactions between an electron's spin (red arrow) and its orbital motion around an atom's nucleus. When the electron spins align parallel to each another, as they do here, the material has a type of magnetism called ferromagnetism. Figure credit: Dan Nevola, Brookhaven National Laboratory.

UPTON, NY—Electrons in a solid occupy distinct energy bands separated by gaps. Energy band gaps are an electronic “no man’s land,” an energy range where no electrons are allowed. Now, scientists studying a compound containing iron, tellurium, and selenium have found that an energy band gap opens at a point where two allowed energy bands intersect on the material’s surface. They observed this unexpected electronic behavior when they cooled the material and probed its electronic structure with laser light. Their findings, reported in the Proceedings of the National Academy of Sciences, could have implications for future quantum information science and electronics.

The particular compound belongs to the family of iron-based high-temperature superconductors, which were initially discovered in 2008. These materials not only conduct electricity without resistance at relatively higher temperatures (but still very cold ones) than other classes of superconductors but also show magnetic properties.

“For a while, people thought that superconductivity and magnetism would work against each other,” said first author Nader Zaki, a scientific associate in the Electron Spectroscopy Group of the Condensed Matter Physics and Materials Science (CMPMS) Division at the U.S. Department of Energy’s (DOE) Brookhaven National Laboratory. “We have explored a material where both develop at the same time.”

Aside from superconductivity and magnetism, some iron-based superconductors have the right conditions to host “topological” surface states. The existence of these unique electronic states, localized at the surface (they do not exist in the bulk of the material), reflects strong interactions between an electron’s spin and its orbital motion around the nucleus of an atom.

Quantum computers promise tremendous speedups for calculations that would take an impractical amount of time or be impossible on traditional computers. One of the challenges to realizing practical quantum computing is that qubits are highly sensitive to their environment. Small interactions cause them to lose their quantum state and thus stored information becomes lost. Theory predicts that Majorana fermions (sought-after quasiparticles) existing in superconducting topological surface states are immune to environmental disturbances, making them an ideal platform for robust qubits.

Seeing the iron-based superconductors as a platform for a range of exotic and potentially important phenomena, Zaki, Johnson, and their colleagues set out to understand the roles of topology, superconductivity and magnetism.

CMPMS Division senior physicist Genda Gu first grew high-quality single crystals of the iron-based compound. Then, Zaki mapped the electronic band structure of the material via laser-based photoemission spectroscopy. When light from a laser is focused onto a small spot on the material, electrons from the surface are “kicked out” (i.e., photoemitted). The energy and momentum of these electrons can then be measured.

When they lowered the temperature, something surprising happened.

“The material went superconducting, as we expected, and we saw a superconducting gap associated with that,” said Zaki. “But what we didn’t expect was the topological surface state opening up a second gap at the Dirac point. You can picture the energy band structure of this surface state as an hourglass or two cones attached at their apex. Where these cones intersect is called the Dirac point.”

As Johnson and Zaki explained, when a gap opens up at the Dirac point, it’s evidence that time-reversal symmetry has been broken. Time-reversal symmetry means that the laws of physics are the same whether you look at a system going forward or backward in time—akin to rewinding a video and seeing the same sequence of events playing in reverse. But under time reversal, electron spins change their direction and break this symmetry. Thus, one of the ways to break time-reversal symmetry is by developing magnetism—specifically, ferromagnetism, a type of magnetism where all electron spins align in a parallel fashion.

“The system is going into the superconducting state and seemingly magnetism is developing,” said Johnson. “We have to assume the magnetism is in the surface region because in this form it cannot coexist in the bulk. This discovery is exciting because the material has a lot of different physics in it: superconductivity, topology, and now magnetism. I like to say it’s one-stop shopping. Understanding how these phenomena arise in the material could provide a basis for many new and exciting technological directions.”

As previously noted, the material’s superconductivity and strong spin-orbit effects could be harnessed for quantum information technologies. Alternatively, the material’s magnetism and strong spin-orbit interactions could enable dissipationless (no energy loss) transport of electrical current in electronics. This capability could be leveraged to develop electronic devices that consume low amounts of power.

Coauthors Alexei Tsvelik, senior scientist and group leader of the CMPMS Division Condensed Matter Theory Group, and Congjun Wu, a professor of physics at the University of California, San Diego, provided theoretical insights on how time reversal symmetry is broken and magnetism originates in the surface region.

In a separate study with other collaborators in the CMPMS Division, the experimental team is examining how different concentrations of the three elements in the sample contribute to the observed phenomena. Seemingly, tellurium is needed for the topological effects, too much iron kills superconductivity, and selenium enhances superconductivity.

In follow-on experiments, the team hopes to verify the time-reversal symmetry breaking with other methods and explore how substituting elements in the compound modifies its electronic behavior.

“As materials scientists, we like to alter the ingredients in the mixture to see what happens,” said Johnson. “The goal is to figure out how superconductivity, topology, and magnetism interact in these complex materials.”