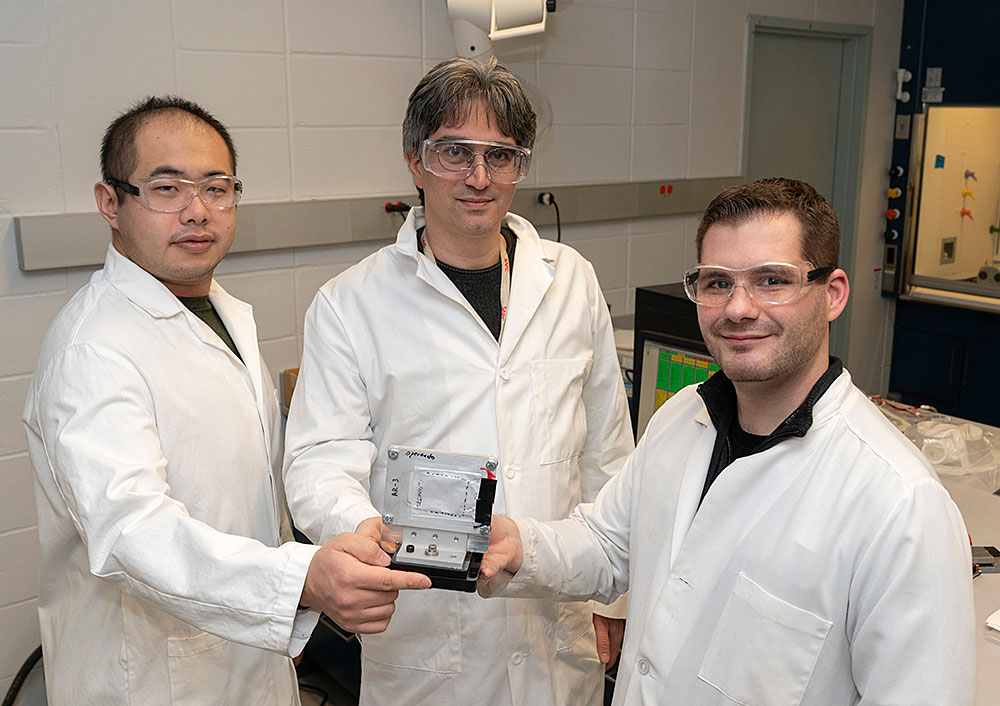 UPTON, NY—Scientists have identified the primary cause of failure in a state-of-the-art lithium-metal battery, of interest for long-range electric vehicles. Using high-energy x-rays, they followed the cycling-induced changes at thousands of different points across the battery and mapped the variations in performance. At each point, they used the x-ray data to calculate the amount of cathode material and its local state of charge. These findings, combined with complementary electrochemical measurements, enabled them to determine the dominant mechanism driving the loss of battery capacity after many charge-discharge cycles. As they recently reported in Chemistry of Materials, depletion of the liquid electrolyte was the primary cause of failure. The electrolyte transports lithium ions between the rechargeable battery’s two electrodes (anode and cathode) during each charge and discharge cycle.

“The big advantage of batteries with anodes made of lithium metal instead of graphite, the material typically used in today’s batteries, is their high energy density,” explained corresponding author Peter Khalifah, a joint appointee in the Chemistry Division at the U.S. Department of Energy’s (DOE) Brookhaven National Laboratory and the Department of Chemistry at Stony Brook University. “Increasing the amount of energy that a battery material can store for a given mass is the best way to extend the driving range of electric vehicles.”

Since 2017, the Battery500 Consortium—a group of national labs and universities—has been working to develop next-generation lithium-metal anodes with an energy density three times higher than that of current automotive batteries. However, getting lithium metal to work well as an anode in a continually cycling rechargeable battery with a high energy density is extremely challenging. Lithium metal is very reactive, so more and more of it degrades as the battery cycles. Over time, these degradation reactions consume other key battery parts, like the liquid electrolyte. 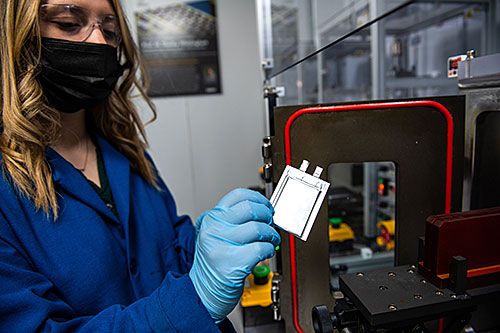 Early on in their development, high-energy-density lithium-metal anodes had a very short lifetime, typically 10 cycles or less. Battery500 Consortium researchers improved this lifetime to 200 cycles for the battery cell studied in this work and, more recently, to 400 cycles in 2020. Ultimately, the consortium seeks to achieve lifetimes of 1,000 cycles or more to meet electric vehicle needs.

“How can we make high-energy-density lithium-metal batteries that cycle for a longer time?” said Khalifah. “One way of answering this question is to understand the failure mechanism in a realistic “pouch cell” battery. That’s where our work, supported by the Battery500 Consortium, comes in.”

Next, scientists from DOE’s Idaho National Laboratory (INL) performed electrochemical testing on one of the multilayer pouch cells. They found only about 15 percent of the cell’s capacity was lost over the first 170 cycles, but 75 percent was lost over the next 25 cycles. To understand this rapid capacity loss near the end of the battery’s life, they extracted one of the cell’s seven cathode layers and sent it to Brookhaven Lab for studies at the X-ray Powder Diffraction (XPD) beamline of the National Synchrotron Light Source II (NSLS-II). 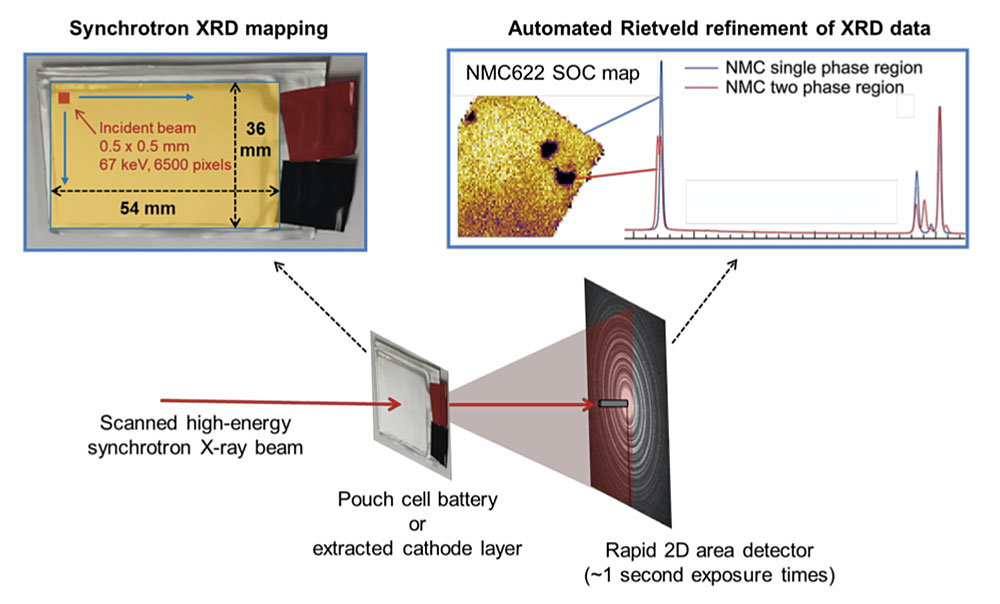 A schematic of the high-energy x-ray powder diffraction setup. Using automated software, the team mapped the battery state of charge (SOC) based on the diffraction data they collected for thousands of points across the battery.

In XPD, x-rays striking a sample only reflect at certain angles, producing a characteristic pattern. This diffraction pattern provides information on many aspects of the sample’s structure, including the volume of its unit cell—the smallest repeating portion of the structure—and the positions of atoms within the unit cell.

Though the team primarily wanted to learn about the lithium-metal anode, its x-ray diffraction pattern is weak (because lithium has few electrons) and doesn’t change much during battery cycling (staying as lithium metal). So, they indirectly probed changes in the anode by studying closely related changes in the lithium nickel manganese cobalt oxide (NMC) cathode, whose diffraction pattern is much stronger.

“The cathode serves as a “reporter” for the anode,” explained Khalifah. “If the anode starts to fail, its problems will be mirrored in the cathode because the nearby regions of the cathode will be unable to effectively take up and release lithium ions.”

The XPD beamline played a critical role in the experiment. With their high energy, the x-rays at this beamline can completely penetrate through battery cells, even those a few millimeters thick. The beam’s high intensity and large two-dimensional area detector enabled the scientists to rapidly collect high-quality diffraction data for thousands of points across the battery. 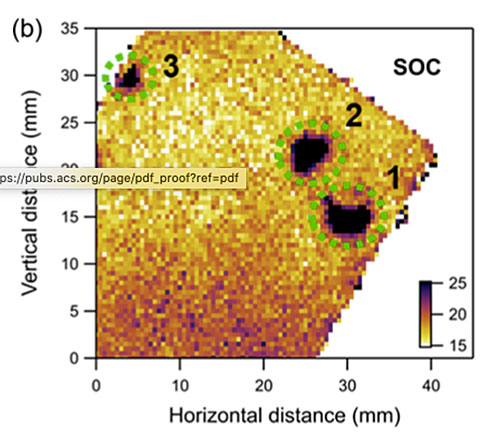 A state-of-charge map for a single cathode layer extracted from an end-of-life pouch cell after its 199th discharge cycle. The map exhibits three hotspots (numbered circles), each with a state of charge much higher than that in the rest of the cell, indicating localized failure in these locations.

“In this country, NSLS-II is only one of two x-ray synchrotrons suitable for high-energy diffraction studies,” explained Khalifah. “For each point, we got a high-resolution diffraction pattern in about a second, allowing us to map the entire area of the battery in two hours—more than 100 times faster than if the x-rays were generated using a conventional laboratory x-ray source.”

The first quantity they mapped was the state of charge (SOC)—the amount of energy remaining in the battery compared to the energy it had when it was “full”—for the single cathode layer. A 100-percent SOC means the battery is fully charged, having as much energy as it can. With battery usage, this percentage drops. For example, a laptop showing 80-percent power is at an 80-percent SOC. In chemistry terms, SOC corresponds to the lithium content in the cathode, where lithium is reversibly inserted and removed during cycling. As lithium is removed, the cathode’s unit cell volume shrinks. This volume can be easily determined from x-ray diffraction measurements, which are therefore sensitive to the local SOC at each point. Any local regions where performance is degrading will have different SOCs from the rest of the cathode.

The SOC maps revealed three “hotspots,” each a few millimeters in diameter, where the local performance was much worse than that of the rest of the cell. Only a portion of the NMC cathode in the hotspots had trouble cycling; the rest remained synchronized with the cell. This finding suggested the battery capacity loss was due to partial destruction of the liquid electrolyte, as loss of the electrolyte will “freeze” the battery at its current SOC.

Other possible reasons for the battery capacity loss—consumption of the lithium-metal anode or gradual loss of lithium ions or electronic conductivity as degradation products form on the electrode surface—would not lead to the simultaneous presence of active and inactive NMC cathode in the hotspots. Follow-up experiments led by INL team members on smaller battery coin cells designed to intentionally fail through electrolyte depletion exhibited the same behavior as this large pouch cell, confirming the failure mechanism.

“Electrolyte depletion was the failure mechanism most consistent with the synchrotron x-ray and electrochemistry data,” said Khalifah. “In many regions of the cell, we saw the electrolyte was partially depleted, so ion transport became more difficult but not impossible. But in the three hotspots, the electrolyte largely ran out, so cycling became impossible.”

In addition to pinpointing the location of the hotspots where failure was occurring most rapidly, the synchrotron x-ray diffraction studies also revealed why failure was occurring there by providing the amount of NMC present at each position on the cathode. Regions with the worst failure typically had smaller amounts of NMC than the rest of the cell. When less of the NMC cathode is present, that part of the battery charges and discharges more quickly and completely, causing the electrolyte to be consumed more rapidly and accelerating its eventual failure in these regions. Even small reductions in the cathode amount (five percent or less) can accelerate failure. Therefore, improving manufacturing processes to produce more uniform cathodes should lead to longer-lasting batteries.

“This work is a great example of a successful collaboration among BNL, INL, and PNNL by using our different expertise in energy storage,” said Jie Xiao, group leader of PNNL’s battery research program.

“The results from this study and other Battery500 activities clearly show the benefit of using capabilities from across the DOE complex to drive advancement in energy storage technologies,” added Eric Dufek, department manager for INL’s Energy Storage and Advanced Vehicle Department.

In future studies, the team plans to map the changes occurring while the battery charges and discharges.

“In this study, we looked at a single snapshot of the battery near the end of its lifetime,” said Khalifah. “One important result was demonstrating how the technique has sufficient sensitivity that we should be able to apply it to operating batteries. If we can collect diffraction data while the battery cycles, we’ll get a movie of how all the different parts change over time. This information will provide a more complete picture of how failure happens and, ultimately, enable us to design higher-performance batteries.”