Lighting Up Ultrafast Magnetism in a Metal Oxide 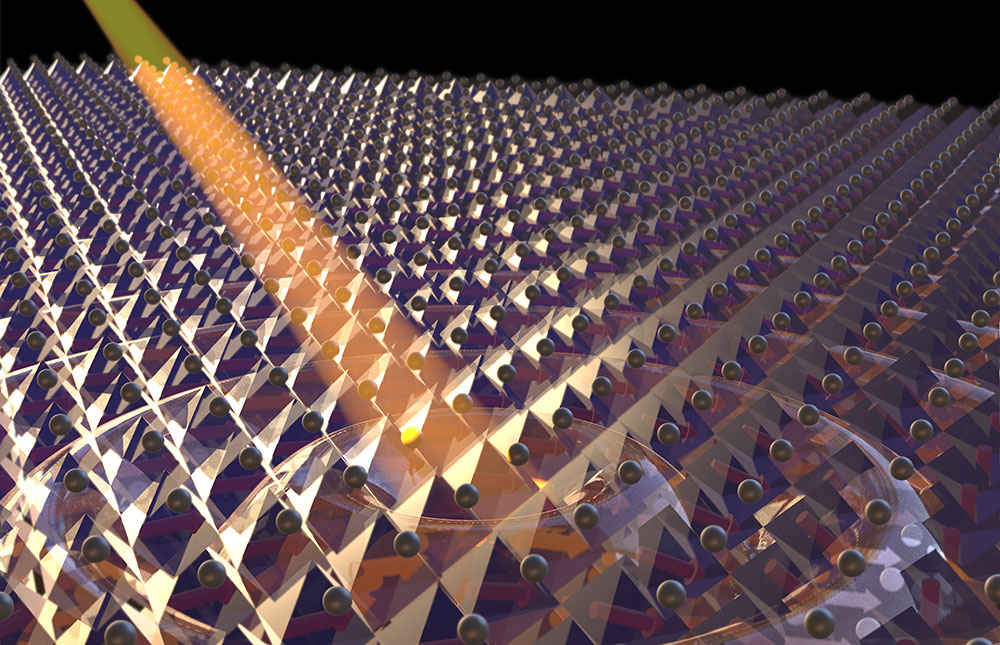 UPTON, NY—What happens when very short pulses of laser light strike a magnetic material? A large international collaboration led by the U.S. Department of Energy’s (DOE) Brookhaven National Laboratory set out to answer this very question. As they just reported in the Proceedings of the National Academy of Sciences, the laser suppressed magnetic order across the entire material for several picoseconds, or trillionths of a second. Understanding how magnetic correlations change on ultrafast timescales is the first step in being able to control magnetism in application-oriented ways. For example, with such control, we may be able to more quickly write data to memory devices or enhance superconductivity (the phenomenon in which a material conducts electricity without energy loss), which often competes with other states like magnetism.

The material studied was strontium iridium oxide (Sr3Ir2O7), an antiferromagnet with a bilayer crystal structure and a large magnetic anisotropy. In an antiferromagnet, the magnetic moments, or electron spins, align in opposite directions to neighboring spins. Anisotropy means the spins need to pay an energetic cost to rotate in any random direction; they really want to sit pointing upwards or downwards in the crystal structure. The X-ray Scattering Group of Brookhaven Lab’s Condensed Matter Physics and Materials Science (CMPMS) Division has previously studied this material (and a single-layer sister compound, Sr2IrO4), so they entered this study with a good understanding of its equilibrium state.

“The very short laser pulses disturb the system, destroying its magnetic order,” said first author Daniel Mazzone, former group member and now an instrument scientist at the Continuous Angle Multiple Energy Analysis (CAMEA) spectrometer at the Paul Scherrer Institute in Switzerland. “In this study, we were interested in seeing how the system relaxes back to its normal state. We knew the relaxation occurs on a very fast timescale, and to take a picture of something that moves very fast, we need very short pulses of illumination. With an x-ray free-electron laser source, we can generate pulses short enough to see the movement of atoms and molecules. Such sources only exist at five places around the world—in the United States, Japan, Korea, Germany, and Switzerland.” 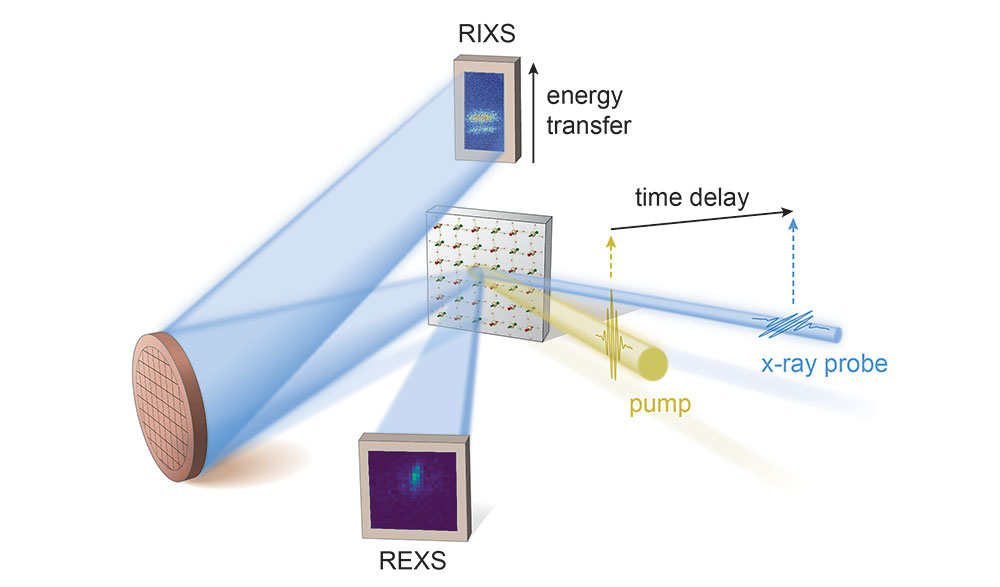 A schematic of the resonant inelastic x-ray scattering (RIXS) and resonant elastic x-ray scattering (REXS) setups. The square in the middle represents the sample, which is struck with a laser (pump) and then x-rays (probe) almost immediately after. For the RIXS experiments, the team built a motorized x-ray spectrometer (copper-colored circle) to see how spins are behaving locally.

In this study, the team ran experiments at two of the five facilities. At the SPring-8 Angstrom Compact free-electron Laser (SACLA) in Japan, they conducted time-resolved resonant elastic x-ray scattering (tr-REXS). At the x-ray pump-probe instrument of the Linac Coherent Light Source—a DOE Office of Science User Facility at SLAC National Accelerator Laboratory—the scientists performed time-resolved resonant inelastic x-ray scattering (tr-RIXS). In both scattering techniques, x-rays (probe) strike the material almost immediately after the laser pulse (pump). By measuring the energy and angle of scattered particles of light (photons), scientists can determine the material’s electronic structure and thus magnetic configuration. In this case, the x-ray energy was tuned to be sensitive to the electrons around iridium atoms, which drive magnetism in this material. While tr-REXS can reveal the degree of long-range magnetic order, tr-RIXS can provide a picture of local magnetic interactions.

“In order to observe the detailed behavior of spins, we need to measure the energy change of the x-rays with very high precision,” explained co-corresponding author Mark Dean, a physicist in the CMPMS Division X-ray Scattering Group. “To do so, we built and installed a motorized x-ray spectrometer at SLAC.”

Their data revealed how magnetic interactions are suppressed not just locally but everywhere. This suppression persists for picoseconds before the magnetic order returns to its initial antiferromagnetic state.

“The bilayer system does not have energetically low-cost ways to deform the magnetic state,” explained Dean. “It gets stuck in this bottleneck where the magnetism is out of equilibrium and is not recovering, at least not as quickly as in the monolayer system.”

“For most applications, such as data storage, you want fast magnetic switching,” added Mazzone. “Our research suggests systems where spins can point whichever direction are better for manipulating magnetism.” 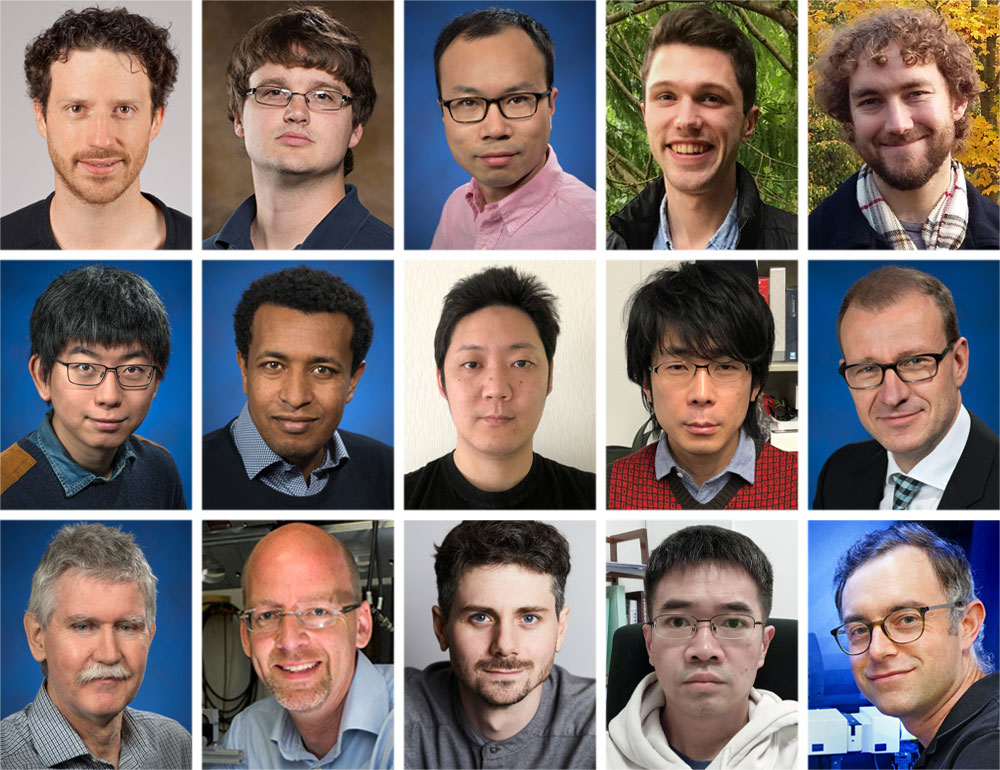 Next, the team plans to look at related materials and hopes to manipulate magnetism in more targeted ways—for example, changing how strongly two neighboring spins “talk to” each other.

“If we can change the distance between two spins and see how that affects their interaction, that would be really cool,” said Mazzone. “With an understanding of how magnetism evolves, we could tweak it, maybe generating new states.”