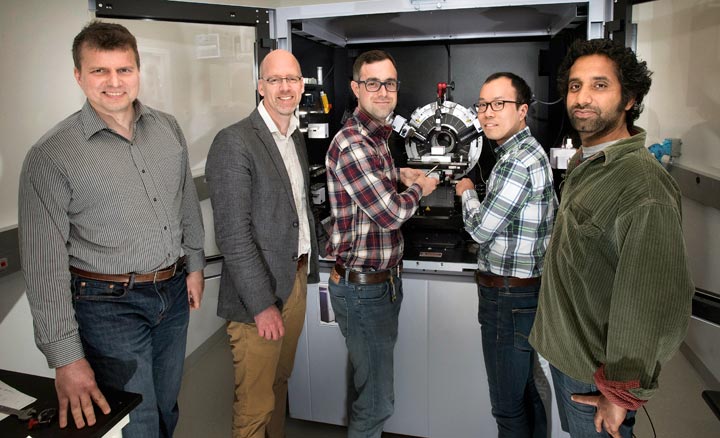 UPTON, NY — A quick flash of light can make ordinary materials extraordinary, potentially inducing qualities such as the perfect efficiency of superconductivity even at room temperature. But these subatomic transformations are infamously fleeting—they vanish in just trillionths of a second.

Now, an international team of scientists has used synchronized infrared and x-ray laser pulses to simultaneously manipulate and reveal the ultra-fast magnetic properties of this promising quantum landscape. The rapid, light-driven switching between magnetic states, explored here with unprecedented precision, could one day revolutionize the reading and writing of data in computers and other digital devices.

"We developed a way to reveal light-induced femtosecond magnetic dynamics in as yet unseen detail."

The study, published May 9, 2016, in the journal Nature Materials, was led by scientists at the U.S. Department of Energy's Brookhaven National Laboratory and included researchers from the U.S., China, Germany, Japan, Spain, and the UK.

"We developed a way to reveal light-induced femtosecond magnetic dynamics in as yet unseen detail," said Mark Dean, a physicist at Brookhaven Lab and lead author on the study. "This brings us closer to perfecting a recipe for manipulating these materials on ultra-fast time scales."

This novel x-ray technique, called time-resolved resonant inelastic scattering, revealed the subtle spin correlations, which travel as waves through the material and define its magnetic properties. Crucially, they behaved differently between two- and three-dimensional spaces when sparked by an infrared laser pulse.

"Within a two-dimensional atomic plane, the novel state lasted just a few picoseconds," said Brookhaven physicist and study coauthor Yue Cao. "But three-dimensional correlations also cross between planes, and these took hundreds of picoseconds to vanish—on this scale, that difference is tremendous. It is enormously exciting to help pioneer a new technique and see it succeed."

The bulk of the experimental work relied on the powerful and precise x-ray lasers available at SLAC National Accelerator Laboratory's Linac Coherent Light Source, a DOE Office of Science User Facility, and the SACLA facility in Japan.

To introduce novel magnetic and electronic qualities, scientists often use a technique called chemical doping to augment the atomic configuration of a material. Electrons can be meticulously added or removed, but the process is permanent.

"We wanted to access similar states transiently, so we used photo-doping," Dean said. "A laser pulse supplies the needed photons, which changes the electron and spin configuration in the sample—the same spins thought to be responsible for phenomena like superconductivity. Moments later, the material returns to its native state."

In this work, the scientists used a strontium-iridium-oxygen compound (Sr2IrO4), selected for its strong magnetic interactions. Manipulating spin in the material was relatively easy—the real challenge was catching it in motion. 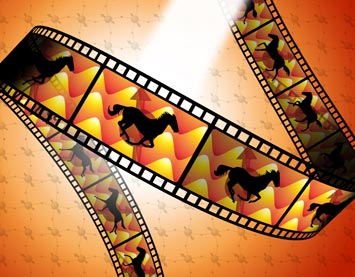 Way back in 1872, the mid-stride motion of a galloping horse remained a mystery. Did all four hooves leave the ground? And if so, when? The human eye was incapable of pinpointing the action, so people turned to what was then the cutting edge in photon-based technology: the photograph.

Eadweard Muybridge tackled the puzzle, pioneering techniques to produce brief and powerful bursts of light. Muybridge found a way to capture the horse at each moment of its stride—as seen in the illustration—and instantly transformed both photography and the science of motion. Now, scientists are casting light on even fleeter feet: quantum waves.

"Muybridge needed a photon source and detection source with unprecedented speed, so he pushed the limits of the technology," Cao said. "His puzzle happened to be about a half of a millisecond, while we're looking at things about a billion times faster, but the principle of using light to produce a revelatory snapshot is the same."

The collaboration turned to two powerful photon sources: the LCLS and SACLA, both uniquely capable of illuminating a quantum spin wave mid-stride. Both facilities can produce x-ray pulses with extremely short duration and high brightness.

For the experiment, an initial infrared laser pulse struck the layered Sr2IrO4 compound, destroying the native magnetic state. For a brief moment, the electrons inside the material formed spin waves that rippled through the material and radically changed its electronic and magnetic properties. Trillionths of a second later, an x-ray pulse followed and bounced off those emergent waves. By measuring the change in both momentum and the angles of diffraction, the scientists could deduce the transient electronic and magnetic qualities.

This specific process of bouncing and tracking x-rays, called resonant inelastic x-ray scattering (RIXS), was also pioneered by members of this collaboration to explore similar phenomena in condensed matter systems.  The new research builds on that to include time-resolved data points.

"Beyond the remarkable capabilities of LCLS and SACLA to supply ultra-short femtosecond x-ray pulses, the challenge we were facing was how to detect the response of the spins," said study coauthor Xuerong Liu from the Institute of Physics in Beijing. "That is, we needed a specialized x-ray detection system or 'camera.'"

The scientists developed a highly specialized RIXS spectrometer, which used millimeter-sized silicon crystals to measure the exact energy of the rebounding x-rays.

The data revealed a clear difference in the propagation and timescale of the magnetic phenomena, with the inter-layer correlations taking hundreds of times longer to recover than those within each layer.

"The findings match theoretical expectations, which is encouraging, but more importantly they demonstrate the strength and precision of this technique," said collaborator Michael Först of the Max Planck Institute for the Structure and Dynamics of Matter in Hamburg, Germany. "We can now dive deeper into the mechanism and think of strategies to fine-tune the control of magnetic properties with light."

Next, the scientists plan to explore optical pulses at even longer wavelengths, which will shift atoms within the material without directly exciting the electrons and spins. That work may help reveal the native magnetic coupling within the material, which in turn will clarify how to best break that coupling and toggle between different electronic and magnetic states.

The research was funded in part by the DOE's Office Science (BES), which supported experimentation at LCLS.