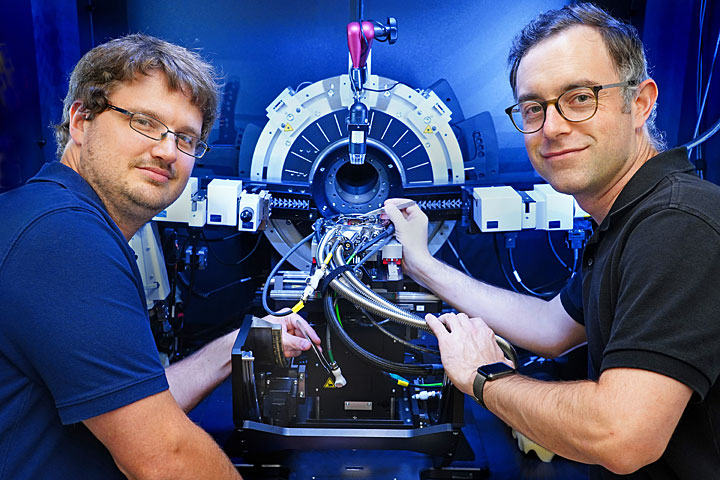 Brookhaven scientists Derek Meyers (left) and Mark Dean (right) using their x-ray diffractometer to characterize the atomic structure of the samples for the experiment.

Consider the classic, permanent magnet: it both clings to the refrigerator and drives data storage in most devices. But another kind of impervious magnetism hides deep within many materials—a phenomenon called antiferromagnetism (AFM)—and is nearly imperceptible beyond the atomic scale.

Now, a team of scientists just developed an unprecedented material that cracks open this hermetic magnetism, confirming a decades-old theory and creating new engineering possibilities. The team, led by the U.S. Department of Energy’s (DOE) Brookhaven National Laboratory and the University of Tennessee, designed AFM materials with spin—the quantum mechanism behind all magnetism—that can be easily controlled with minimal energy.

“Material synthesis finally caught up to theory, and we found a way around the most prohibitive quantum quirks of exploiting antiferromagnetism,” said Brookhaven Lab physicist and study corresponding author Mark Dean. “This work dives deeper into the underpinnings of magnetism and creates new possibilities for spin-based technologies.”

The results, published this summer in Nature Physics, could dramatically enhance the emerging field of spintronics, where information is coded into the directional spin of electrons.

“The real surprise was just how well this synthetic material functioned right out of the gate,” said coauthor and Brookhaven Lab scientist Derek Meyers. “Not only can we manipulate this remarkable spin, but we can do it with extreme efficiency.”

The spin orientation of electrons within atoms and can be visualized as simple arrows pointing in well-defined directions.

“In ferromagnets, these spins are all aligned,” said University of Tennessee professor and corresponding author Jian Liu. “They all point up or down, creating an external magnetic effect—like refrigerator magnets—that can be flipped when an external field is applied.”

This flipping process powers the writing of digital information on most data storage devices, among other things.

“Antiferromagnets are much stranger,” Meyers said. “Every arrow points in the opposite direction of its nearest neighbor, alternating up-down-up-down across the material. And it stays synchronized, such that one flip reverses all the others. That means, essentially, they all cancel each other out.”

This perfect balance makes AFM spin notoriously impervious to manipulation, requiring too much energy to make the process useful. So the scientists introduced a little imperfection.

“If we tilt, or cant, the spins, we create asymmetry and make the material more susceptible to influence,” Dean said. “External magnets can couple with the spin. But prior to this work, there was a built-in compromise to this approach.”

While the canted spin can “feel” magnetic fields, the directional freedom is lost—the spins can no longer change direction.

Gears in a quantum clock

Imagine adjacent electrons as gears in a clock: the teeth all fit together to move in tandem and preserve precise relationships. Tilting the spin realigns those gears, almost as if they abruptly began to rotate in opposite directions and locked in place. How, then, to set those gears back in motion?

“We followed a long-standing theory to create an unprecedented material that both cants the spin and keeps it free to rotate, which we would call preserving isotropy,” said first author Lin Hao of the University of Tennessee. “To do this, we designed a structure that cancels out those competing anisotropies, or directional asymmetries.”

In a way, they built another gear into their antiferromagnetic clock. The extra gear slots in between the jammed electron spins, giving them a balance and space that would never naturally occur. The “gear” is actually a hidden symmetry called SU(2), a mathematical term describing the isotropic freedom.

“The extreme sophistication of two-dimensional materials synthesis made this possible,” Liu said. “We grew a crystalline lattice with fully customized geometries to prevent the spins from locking—this is engineering with almost quantum precision.”

The team used pulsed laser deposition to create a lattice composed of strontium, iridium, titanium, and oxygen. In this way, atomically thin layers could be stacked in different configurations to induce artificial and much desired properties.

In this work, the team exploited special “gearing” properties of the iridium oxide layers in which the spins can be tilted, but remain free to respond to an applied magnetic field.

The collaboration turned to the Advanced Photon Source (APS)—a DOE Office of Science User Facility at DOE’s Argonne National Laboratory—to confirm the crystal structure of the material. Using advanced resonant x-ray diffraction, the scientists revealed details of both the lattice and the electron configuration.

“Because of the precision possible at the APS, we were able to see the fruits of the difficult synthesis process,” Meyers said. “We saw the precise layered structure we wanted, but the real test was in the magnetic function.”

Again turning to APS, the team used x-ray scattering to measure the antiferromagnetic order, the alignment of the spins within the material.

“We were pleased to see our canted spins retain the freedom of motion we expected,” Dean said. “It’s rare and thrilling to see things come together so seamlessly. And crucially, we proved that manipulating that AFM spin required very little energy—a must for spintronic applications.”

Traditional magnetic devices have an intrinsic limit: packed too closely together, ferromagnetic materials affect each other. This translates into a functional cap on data density beyond which the spins become corrupted. However, AFM materials—or discrete AFM crystals in this instance—exert no external influence.

“We can, in theory, pack much more information into devices by manipulating antiferromagnetic spin,” Dean said. “That’s part of the promise of spintronics.”

The combination of low energy input—think efficient writing of data—and density make the new material an ideal candidate for investment.

“The obstacle right now has to do with scale,” Liu said. “This is a first-of-its-kind material, so no industrial-scale process exists. But this is how it starts, and the demand for this kind of functionality might rapidly move this innovation into applications.”