The following news release was originally issued by the U.S. Department of Energy’s Lawrence Berkeley National Laboratory on September 16, 2021.

How to Catch a Perfect Wave: Scientists Take a Closer Look Inside the Perfect Fluid 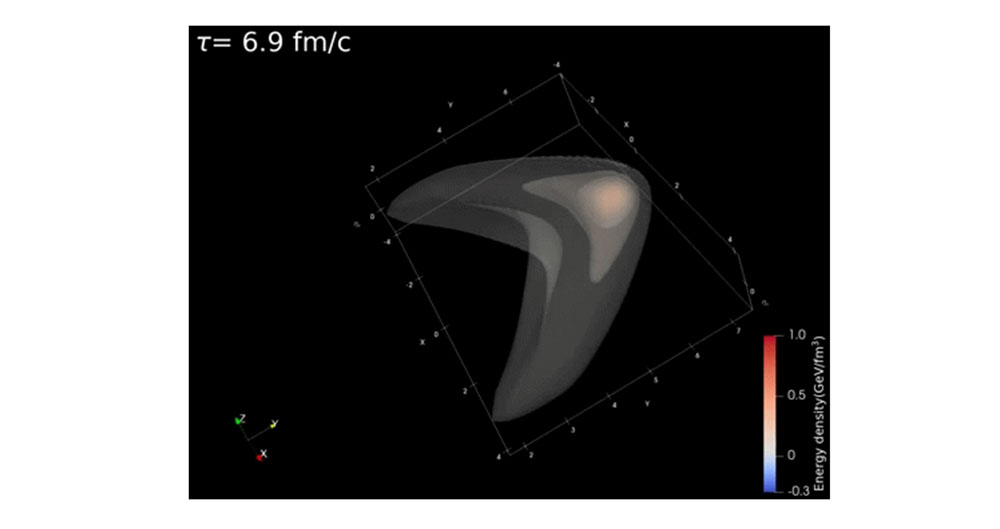 View time-lapse video clip showing a supersonic Mach wave as it evolves in an expanding quark-gluon plasma. The computer simulation provides new insight into how matter formed during the birth of the early universe. (Credit: Berkeley Lab)

Scientists have reported new clues to solving a cosmic conundrum: How the quark-gluon plasma – nature’s perfect fluid – evolved into matter.

A few millionths of a second after the Big Bang, the early universe took on a strange new state: a subatomic soup called the quark-gluon plasma.

And just 15 years ago, an international team including researchers from the Relativistic Nuclear Collisions (RNC) group at Lawrence Berkeley National Laboratory (Berkeley Lab) discovered that this quark-gluon plasma is a perfect fluid – in which quarks and gluons, the building blocks of protons and neutrons, are so strongly coupled that they flow almost friction-free.

Scientists postulated that highly energetic jets of particles fly through the quark-gluon plasma – a droplet the size of an atom’s nucleus – at speeds faster than the velocity of sound, and that like a fast-flying jet, emit a supersonic boom called a Mach wave. To study the properties of these jet particles, in 2014 a team led by Berkeley Lab scientists pioneered an atomic X-ray imaging technique called jet tomography. Results from those seminal studies revealed that these jets scatter and lose energy as they propagate through the quark-gluon plasma.

But where did the jet particles’ journey begin within the quark-gluon plasma? A smaller Mach wave signal called the diffusion wake, scientists predicted, would tell you where to look. But while the energy loss was easy to observe, the Mach wave and accompanying diffusion wake remained elusive.

This 2010 video describes collisions of heavy particles at Brookhaven National Laboratory's Relativistic Heavy Ion Collider. In 2005, RHIC physicists announced that matter created in the accelerator's most energetic collisions behaves like a nearly perfect liquid. The properties of this fluid, the quark-gluon plasma, help us to understand the properties of matter in the early universe. (Credit: Brookhaven National Laboratory)

“Its signal is so tiny, it’s like looking for a needle in a haystack of 10,000 particles. For the first time, our simulations show one can use 2D jet tomography to pick up the tiny signals of the diffusion wake in the quark-gluon plasma,” said study leader Xin-Nian Wang, a senior scientist in Berkeley Lab’s Nuclear Science Division who was part of the international team that invented the 2D jet tomography technique.

To find that supersonic needle in the quark-gluon haystack, the Berkeley Lab team culled through hundreds of thousands of lead-nuclei collision events simulated at the Large Hadron Collider (LHC) at CERN, and gold-nuclei collision events at the Relativistic Heavy Ion Collider (RHIC) at Brookhaven National Laboratory. Some of the computer simulations for the current study were performed at Berkeley Lab’s NERSC supercomputer user facility.

Wang says that their unique approach “will help you get rid of all this hay in your stack – help you focus on this needle.” The jet particles’ supersonic signal has a unique shape that looks like a cone – with a diffusion wake trailing behind, like ripples of water in the wake of a fast-moving boat. Scientists have searched for evidence of this supersonic “wakelet” because it tells you that there is a depletion of particles. Once the diffusion wake is located in the quark-gluon plasma, you can distinguish its signal from the other particles in the background.

Their work will also help experimentalists at the LHC and RHIC understand what signals to look for in their quest to understand how the quark-gluon plasma – nature’s perfect fluid – evolved into matter. “What are we made of? What did the infant universe look like in the few microseconds after the Big Bang? This is still a work in progress, but our simulations of the long-sought diffusion wake get us closer to answering these questions,” he said.

NERSC is a DOE Office of Science user facility at Berkeley Lab.

This work was supported by the DOE Office of Science and Office of Nuclear Physics.