Proposed at Brookhaven Lab, the MicroBooNE experiment was designed to follow up on an intriguing findings made by earlier experiments, including the Liquid Scintillator Neutrino Detector (LSND) at Los Alamos National Lab and MiniBooNE at Fermilab. MiniBooNE researchers detected an anomaly that hinted towards the existence of a “sterile neutrino,” a yet-to-be-discovered particle that is theorized to only interact with gravity. However, MiniBooNE was unable to differentiate between electrons and photons, so MicroBooNE was envisioned to better explore this area of physics and clarify the anomaly. The latest findings, compiled from analyses described in this release, show no evidence of a sterile neutrino. This long-awaited finding was directly enabled by software called Wire-Cell, a neutrino event-reconstruction toolkit developed at Brookhaven Lab.

Scientists and engineers at Brookhaven Lab  also made significant contributions to the design and construction of  MicroBooNE’s Liquid Argon Time Projection Chamber (LArTPC), the heart of the experiment. The LArTPC is a special detector that holds 170 tons of pure liquid argon kept at -303 degrees Fahrenheit. This frigid liquid makes it possible for MicroBooNE to detect elusive neutrino signals. Brookhaven’s scientists and engineers developed special “cold electronics.” These circuit boards are packed with custom-built microelectronics that not only operate in frigid liquid argon but offer exquisite sensitivity.

Brookhaven’s contributions to the MicroBooNE experiment follow the Lab’s longstanding history of expertise and research into neutrinos, including the 2002 Nobel Prize in Physics for the detection of solar neutrinos by Brookhaven chemist Raymond Davis Jr.

Four complementary analyses by Fermilab's MicroBooNE show no signs of a theorized fourth kind of neutrino known as the sterile neutrino. Its existence is considered a possible explanation for anomalies seen in previous physics experiments. 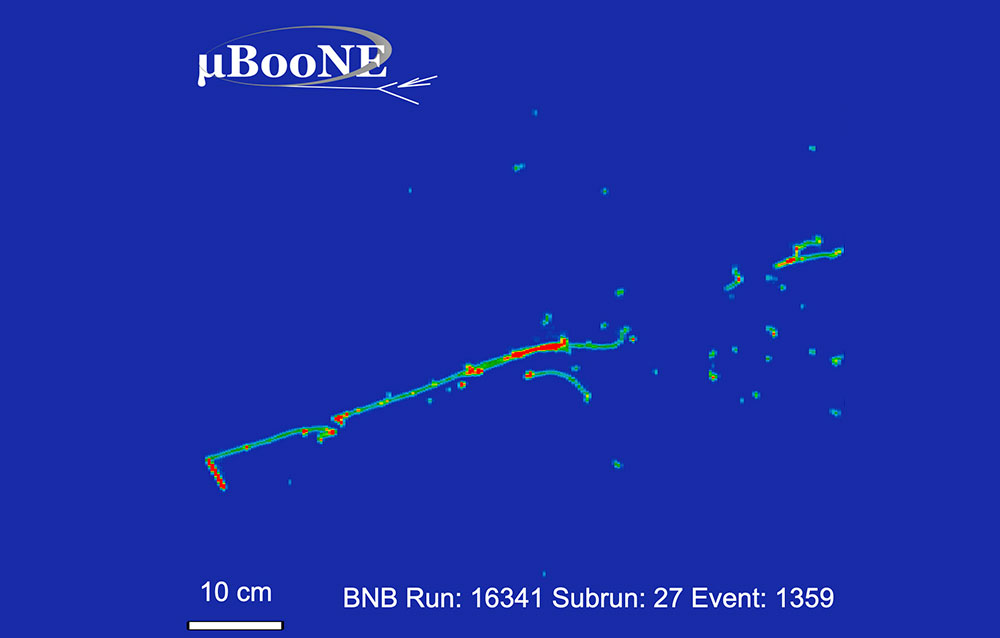 New results from the MicroBooNE experiment at the U.S. Department of Energy’s Fermi National Accelerator Laboratory deal a blow to a theoretical particle known as the sterile neutrino. For more than two decades, this proposed fourth neutrino has remained a promising explanation for anomalies seen in earlier physics experiments. Finding a new particle would be a major discovery and a radical shift in our understanding of the universe.

However, four complementary analyses released by the international MicroBooNE collaboration and presented during a seminar today all show the same thing: no sign of the sterile neutrino. Instead, the results align with the Standard Model of Particle Physics, scientists’ best theory of how the universe works. The data is consistent with what the Standard Model predicts: three kinds of neutrinos—no more, no less.

“MicroBooNE has made a very comprehensive exploration through multiple types of interactions, and multiple analysis and reconstruction techniques,” said Bonnie Fleming, physics professor at Yale University and co-spokesperson for MicroBooNE. “They all tell us the same thing, and that gives us very high confidence in our results that we are not seeing a hint of a sterile neutrino.”

MicroBooNE is a 170-ton neutrino detector roughly the size of a school bus that has operated since 2015. The international experiment has close to 200 collaborators from 36 institutions in five countries. They used cutting-edge technology to record spectacularly precise 3D images of neutrino events and examine particle interactions in detail—a much-needed probe into the subatomic world.

Neutrinos are one of the fundamental particles in nature. They’re neutral, incredibly tiny, and the most abundant particle with mass in our universe—though they rarely interact with other matter. They’re also particularly intriguing to physicists, with a number of unanswered questions surrounding them. These puzzles include why their masses are so vanishingly small and whether they are responsible for matter's dominance over antimatter in our universe. This makes neutrinos a unique window into exploring how the universe works at the smallest scales.

MicroBooNE’s new results are an exciting turning point in neutrino research. With sterile neutrinos further disfavored as the explanation for anomalies spotted in neutrino data, scientists are investigating other possibilities. These include things as intriguing as light created by other processes during neutrino collisions or as exotic as dark matter, unexplained physics related to the Higgs boson, or other physics beyond the Standard Model. 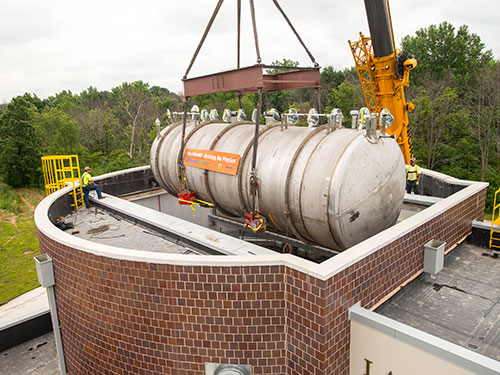 Neutrinos come in three known types—the electron, muon and tau neutrino—and can switch between these flavors in a particular way as they travel. This phenomenon is called “neutrino oscillation.” Scientists can use their knowledge of oscillations to predict how many neutrinos of any kind they expect to see when measuring them at various distances from their source.

Neutrinos are produced by many sources, including the sun, the atmosphere, nuclear reactors and particle accelerators. Starting around two decades ago, data from two particle beam experiments threw researchers for a loop.

Sterile neutrinos emerged as a popular candidate to explain these odd results. While neutrinos are already tricky to detect, the proposed sterile neutrino would be even more elusive, responding only to the force of gravity. But because neutrinos flit between the different types, a sterile neutrino could impact the way neutrinos oscillate, leaving its signature in the data.

But studying the smallest things in nature isn’t straightforward. Scientists never see neutrinos directly; instead, they see the particles that emerge when a neutrino hits an atom inside a detector.

The MiniBooNE detector had a particular limitation: It was unable to tell the difference between electrons and photons (particles of light) close to where the neutrino interacted. This ambiguity painted a muddled picture of what particles were emerging from collisions. You can think of it like having a box of chocolates—MiniBooNE could tell you it contains a dozen pieces, but MicroBooNE could tell you which ones have almonds, and which have caramel.

If MiniBooNE were truly seeing more electrons than predicted, it would indicate extra electron neutrinos causing the interactions. That would mean something unexpected was happening in the oscillations that researchers hadn’t accounted for: sterile neutrinos. But if photons were causing the excess, it would likely be a background process rather than oscillations gone wild and a new particle.

It was clear that researchers needed a more nuanced detector. In 2007, the idea for MicroBooNE was born. 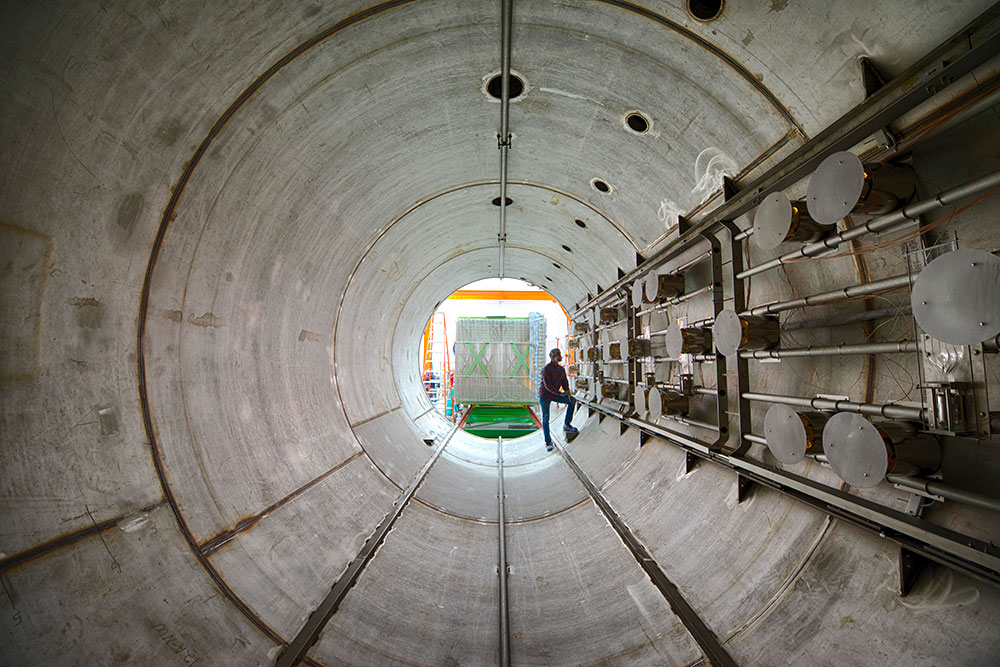 “We’re not seeing what we would have expected from a MiniBooNE-like signal, neither electrons nor the most likely of the photon suspects,” said Fermilab scientist Sam Zeller, who served as MicroBooNE co-spokesperson for eight years. “But that earlier data from MiniBooNE doesn’t lie. There’s something really interesting happening that we still need to explain.”

MicroBooNE ruled out the most likely source of photons as the cause of MiniBooNE’s excess events with 95% confidence and ruled out electrons as the sole source with greater than 99% confidence, and there is more to come.

MicroBooNE still has half of its data to analyze and more ways yet to analyze it. The granularity of the detector enables researchers to look at particular kinds of particle interactions. While the team started with the most likely causes for the MiniBooNE excess, there are additional channels to investigate—such as the appearance of an electron and positron, or different outcomes that include photons.

“Being able to look in detail at these different event outcomes is a real strength of our detector,” Zeller said. “The data is steering us away from the likely explanations and pointing toward something more complex and interesting, which is really exciting.”

While the first analyses weighed in on the sterile neutrino, additional analyses could provide more information about exotic explanations, including dark matter, axion-like particles, the hypothetical Z-prime boson and beyond. There’s even a chance it could still be a sterile neutrino, hiding in even more unexpected ways.

Neutrinos are surrounded by mysteries. The anomalous data seen by the earlier MiniBooNE and LSND experiments still need an explanation. So too does the very phenomenon of neutrino oscillation and the fact that neutrinos have mass, neither of which is predicted by the Standard Model. There are also tantalizing hints that neutrinos could help explain why there is so much matter in the universe, as opposed to a universe full of antimatter or nothing at all.

MicroBooNE is one of a suite of neutrino experiments searching for answers. Crucially, it’s also a long-running testbed for the liquid argon technology that will be used in upcoming detectors.

“We’ve built and tested the hardware, and we’ve also developed the infrastructure to process our enormous dataset,” said Justin Evans, a scientist at the University of Manchester and MicroBooNE co-spokesperson. “That includes the simulations, calibrations, reconstruction algorithms, analysis strategies and automation through techniques like machine learning. This groundwork is essential for future experiments.”

Liquid argon is the material of choice for the ICARUS detector set to begin gathering physics data soon and the Short-Baseline Near Detector coming online in 2023. Together with MicroBooNE, the three experiments form the Short-Baseline Neutrino Program at Fermilab and will produce a wealth of neutrino data. For example, in one month, SBND will record more data than MicroBooNE collected in two years. Today’s results from MicroBooNE will help guide some of the research in the trio’s broad portfolio.

“Every time we look at neutrinos, we seem to find something new or unexpected,” said Evans. “MicroBooNE’s results are taking us in a new direction, and our neutrino program is going to get to the bottom of some of these mysteries.”

Liquid argon will also be used in the Deep Underground Neutrino Experiment, a flagship international experiment hosted by Fermilab that already has more than 1,000 researchers from over 30 countries. DUNE will study oscillations by sending neutrinos 800 miles (1,300 km) through the earth to detectors at the mile-deep Sanford Underground Research Facility. The combination of short- and long-distance neutrino experiments will give researchers insights into the workings of these fundamental particles.

“We have some big, unanswered questions in physics that many experiments are trying to address,” Fleming said. “And neutrinos may be telling us where to find some of those answers. I think if you want to understand how the universe works, you have to understand neutrinos.”