A Neutrino in a Haystack: Brookhaven's Contributions to the MicroBooNE Neutrino Experiment 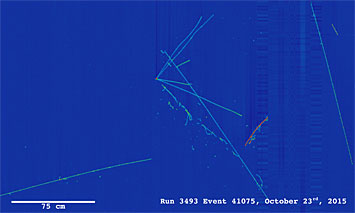 This display shows one of the first neutrino event candidates spotted within the MicroBooNE detector. Credit: MicroBooNE

In the time it takes you to read this sentence, trillions of neutrinos will fly through your body.

Did you feel them? Probably not. That is because, despite their abundance, neutrinos rarely interact with matter; a neutrino can pass through a light-year of lead—about six trillion miles—without disturbing a single atom. And yet physicists are captivated by these tiny, subatomic particles. As the Nobel Committee recently observed in awarding the 2015 Nobel Prize in Physics for neutrino experiments, discoveries about the “deepest secrets” of neutrinos “are expected to change our current understanding of the history, structure and future fate of the universe.”

To uncover the secrets of neutrinos, scientists build massive detectors to help them spot these elusive particles. The latest, dubbed MicroBooNE, recently spotted its first accelerator-born neutrino event candidates at Fermi National AcceleratorLaboratory. Scientists from nearly 30 institutions, including the U.S. Department of Energy’s Brookhaven National Laboratory, collaborate on this experiment.

Given Brookhaven’s impressive track record for hunting neutrinos, including connections to this year’s and previous neutrino Nobel Prizes, it is not surprising that the Lab made significant contributions to MicroBooNE. These contributions leverage Brookhaven’s expertise in detector design and microelectronics, its scientists’ penchant for pushing the boundaries of fundamental physics, and, now that the detector is up-and-running, pioneering efforts in data analysis.

“It’s not one person or one electronics chip or one circuit board,” said Hucheng Chen, a Brookhaven physicist who coordinated the design and construction of the detector read-out system in MicroBooNE. “Brookhaven has a strong team, inspired and guided by Veljko Radeka [an accomplished scientist and longstanding leader of the Lab’s Instrumentation Division], for building the whole system for experiments.”

Designing for the Deep Chill 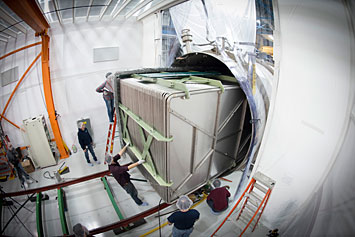 MicroBooNE's time projection chamber, which was designed by Brookhaven physicists and engineers, is guided into a 170-ton cryostat during its assembly at Fermilab. Photo credit: Fermilab

At the heart of MicroBooNE lies a time projection chamber the size of a city bus and enclosed within a cryostat that holds 170 tons of frigid liquid argon. When a passing neutrino interacts with one of these argon atoms, it sometimes produces a charged particle, and the type of particle is determined by the “flavor” of the passing neutrino. These particles, caught in the strong electric field within the time projection chamber, drift towards the detector’s more than 8000 wire electrodes, producing tiny electric currents. By mapping the pattern of currents, scientists can reconstruct a three-dimensional picture of the particle trajectories and use these trajectories to deduce information about the neutrinos that created them.

The combination of extreme temperature, size, and technological complexity in these detectors poses great design challenges for the scientists trying to build them.

“The MicroBooNE experiment was designed not only to further our understanding of the neutrino physics, but also to be a research and development platform for future, much larger detectors using this liquid argon technology,” said Bo Yu, a physicist at Brookhaven who played a lead role in Brookhaven’s contributions to MicroBooNE.

For one, it’s not easy to build structures that can withstand the extreme cold of liquid argon—which boils at a biting -187 degrees Celsius, or -303 degrees Fahrenheit. 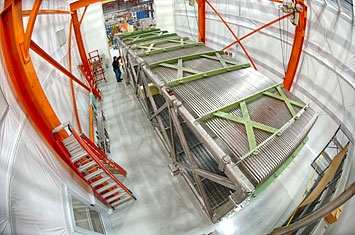 “The time projection chamber is constructed from a mix of stainless steel and fiberglass, which contract differently when cooled down,” said Yu. “Keeping this structure square both at room temperature and in liquid argon is a big challenge.” Yu credits George Mahler, a mechanical engineer in the Brookhaven Lab Collider-Accelerator Department, with designing the mechanical structure that allows for the expansion and contraction that come with these changes in temperature.

The wire electrodes, critical for sensing the presence of charged particles, are also sensitive to the temperature. “The sensing wires are arranged in three planes with different orientations to give three different ‘views’ of the particle tracks,” said Yu. “The wires must maintain a uniform tension both at room temperature and in liquid argon.”

In addition, there is the problem of how to construct a container big enough to hold all that freezing cold liquid argon. Most cryostats have a double-wall design similar to that of an insulated thermos: the liquid argon is placed inside an inner container, which is isolated from the outer container by a vacuum layer. However, these designs can be expensive to scale up to city-bus size.

“Instead, we constructed a single walled cryostat and then built foam insulation around it to minimize the heat leak,” said Chen. MicroBooNE is the first detector of its kind to use this simplified cryostat design.

Brookhaven Lab physicist Hucheng Chen holding a replica of one of the 50 cold electronics boards installed in MicroBooNE. He is standing next to a mock-up of one of MicroBooNE's 11 signal feedthroughs—the part of the detector where electronic signals from the cold electronics of the time projection chamber are carried to the warm electronics outside the cryostat.

Sensors and electronics must also be carefully crafted to maintain their sensitivity in large, cold detectors.

And as the number of electrons decreases, so too does the strength of the signal read out by the sensors. At two and a half meters, MicroBooNE has the longest electron drift distance of any liquid argon time projection chamber neutrino experiment.

“Brookhaven’s Radeka convinced the collaboration that in order to achieve the best possible detection sensitivity, the readout electronics must be placed inside the cryostat vessel, directly at the end of the sensing wires, submerged in the liquid argon,” Yu said. These “cold electronics,” designed for MicroBooNE by Brookhaven engineer Gianluigi De Geronimo and his group, have increased the sensitivity of neutrino detection by a factor of three over ICARUS, a larger liquid argon neutrino detector located in Italy. They also lay the foundation for other future neutrino projects, including the Deep Underground Neutrino Experiment (DUNE), being designed at Fermilab.

Mary Bishai, a physicist leading Brookhaven’s contributions to DUNE, said that these cold electronics are a necessary first step toward building even larger detectors. “We can’t go to the tens of kilotons scale using the old ICARUS technology. We really need to be able to do a lot of the signal processing and digitization in the cold.”

Software to Decipher the Data 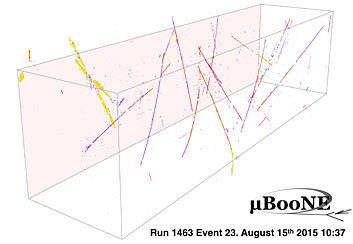 Scientists trying to spot neutrino interactions within MicroBooNE are confounded by tracks from other charged particles—such as these cosmic muons, recorded during a test-run in August 2015—which fly through the detector at much higher rates. Brookhaven physicists are devising pattern recognition software to help them more easily identify tracks arising from neutrino interactions. This three-dimensional reconstruction of MicroBooNE data is shown using a web-based display developed by Brookhaven physicist Chao Zhang.

Now that the detector is operational, Brookhaven’s efforts in MicroBooNE are shifting to the interpretation of vast amounts of data. “Once you get all the information and all the beautiful images, the question becomes how are you going to interpret them?” said Xin Qian, a physicist who is currently leading Brookhaven’s contributions to MicroBooNE.

Again, there are multiple challenges.

The first step: reconstruct three-dimensional representations of charged particle trajectories from the two-dimensional information provided by the wire electrodes. Qian and his group are developing a new approach by building 3D images from individual time slices.

“It is actually very similar to a computed tomographic (CT) scan,” said Qian. “If there is an object inside the time projection chamber, you are scanning it plane by plane, because particles arrive at the detector wire planes at different times. The advantage of this approach is that we can reconstruct the image much more accurately than we could with earlier methods.”

Next comes sifting out the particle tracks created by neutrino interactions from the huge background of other charged particles flowing through the detector. Different types of particles and interactions follow unique trajectories, Qian said. For example, high-energy and relatively heavy cosmic muons usually follow long, relatively straight paths through the detector, while an interaction between an electron neutrino and an argon atom will generate relatively light electrons that can bounce around and produce more electrons and positrons, resulting in a big shower of particles. They look like little bursts.

“When you have an image, humans can actually process it pretty well, but to get a computer to achieve this level of pattern recognition is very difficult,” said Qian. And the shear amount of data that will be collected by MicroBooNE would make the human labor untenable. To get an idea of the needle-in-a-haystack nature of the problem, consider that for each 500 pulses of the neutrino beam, only one neutrino interaction might occur while approximately 24 cosmic muons will flow through the detector during the time it takes for each trigger. So you are trying to pick one real neutrino track from more than 12,000 trajectories.

“This is a very hard problem to solve,” said Qian. “But once we figure it out, we can start to do the real physics research MicroBooNE was designed for.”

That means counting up the different flavors of neutrinos and calculating their energies, learning more about their oscillations from one flavor to the next, and possibly uncovering what these elusive particles may tell us about the underlying structure of our universe.

Brookhaven’s work on MicroBooNE was funded by the DOE Office of Science (HEP), and the National Science Foundation.