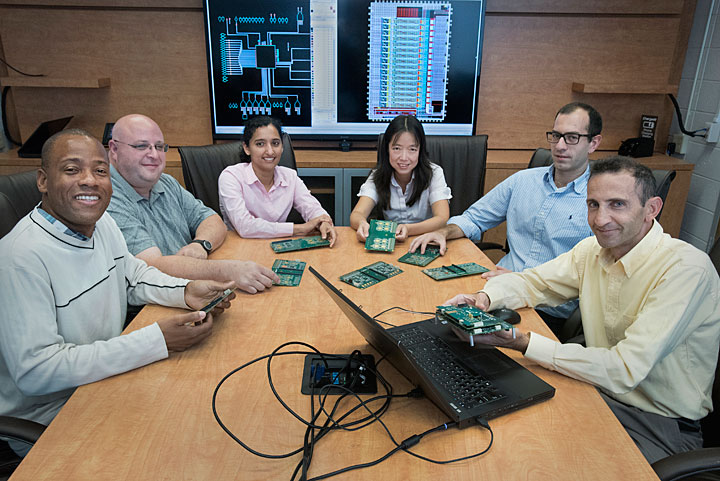 Nestled inside the massive MicroBooNE detector, part of a new neutrino experiment just getting underway at the U.S. Department of Energy’s (DOE) Fermi National Accelerator Laboratory, lie 50 circuit boards packed with custom-built microelectronics. These circuits were designed by engineers at DOE’s Brookhaven National Laboratory to operate while immersed in liquid argon, a cryogenic liquid that boils at a biting -186 degrees Celsius or -303 degrees Fahrenheit.

Physicists have found that a large volume of dense, inert liquid argon provides the perfect medium for spotting the elusive neutrino, a subatomic particle whose properties may provide clues to some of the most puzzling mysteries in physics. So the heart of MicroBooNE is a time projection chamber filled with 170 tons of the frigid fluid. Neutrinos sailing through the chamber occasionally interact with the dense network of argon atoms, generating charged particles like electrons and muons. Guided by an electric field, the particles produced from these interactions generate small electric currents as they drift towards three planes of wire electrodes lining one wall of the time projection chamber. By mapping the moment that each electrode fires, scientists can pinpoint the trajectory of these particles to within three millimeters of space, and use this information to deduce the energy and “flavor” of the passing neutrinos to very high precision.

But the frigid temperatures needed to keep argon in its liquid state pose many challenges. As anyone who has had a phone crash in sub-freezing winter weather knows, electronics are very finicky about the cold.

“Brookhaven National Lab has really been pushing the concept of cold electronics,” said Mary Bishai, a Brookhaven scientist specializing in neutrino physics. “MicroBooNE is the first instrument in which signal processing is achieved with cold electronics,” she noted, but it is also being used as a technological model for the construction of larger, multi-kiloton liquid argon neutrino detectors. “This is a necessary first step to get to detectors that are tens of kilotons larger,” she added.

Bringing electronics into the cold 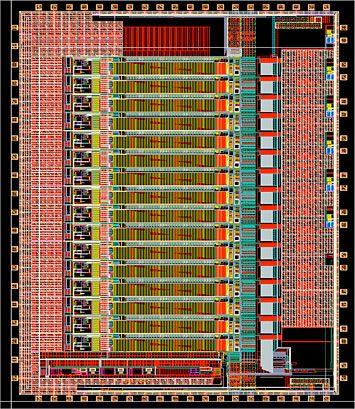 A layout diagram of a cold microelectronics chip developed by Brookhaven Lab engineer Neena Nambiar and her colleagues. This chip converts analog signal to digital signal and operates at temperatures ranging from -220 degrees Celcius to 60 degrees Celcius. The fabricated chip measures 6 millimeters high and 4 millimeters wide and contains 350,000 transistors.

Neena Nambiar and five other electronics engineers in the Instrumentation Division at Brookhaven have been working to develop these specialized cold electronics. “The signals that the electrodes give out are small, so we need to first amplify these small signals and then convert them into a format that a computer can read,” she said.

In smaller detectors, signal processing can occur outside of the frigid cryogenic chamber. However, in large detectors like MicroBooNE, long cables are required to carry the signals from the electrodes to the electronics outside the chamber. Longer cables introduce excess “noise”—distortion created by excess charge stored in the wire—which can drown out the tiny signals. “The aim was to put all of the electronics together inside the detector so that we can avoid long cables and the noise that comes with them,” Nambiar said.

The trouble is, as an electronic circuit is cooled, its resistance to electron “flow” drops. Lowering the resistance of a circuit changes its operating current and also makes its components more susceptible to damage from fast-moving, wayward electrons. In addition, the electronics have to live within a closed chamber and operate for the duration of an experiment.

“All integrated circuits have a limited lifetime,” said Gianluigi De Geronimo, the electrical engineer in Instrumentation who leads the team designing the electronics inside MicroBooNE. “For instance, the ones we use in our cellphones typically have a lifetime on the order of 10 years. When you work in cryogenic environments, the lifetime can be greatly reduced. Since these detectors have to work for 15, 20 years, and there is no way that you can go in and replace the electronics, we developed design guidelines for the integrated circuits that allow them to achieve a lifetime in excess of 20 years.”

To simulate the conditions under which the circuits have to function, De Geronimo and his group use high-end Computer-Aided Design software, finding ways to optimize performance without sacrificing stability or longevity. “Typically it requires three times as many resources and development time to design microelectronic circuits for cryogenic temperature than for room temperature,” De Geronimo said.

In MicroBooNE, only the first stage of signal processing—the amplification of the analog signals—has been brought into the cold. The amplified signals are then carried outside the detector and digitized using traditional “warm” electronics. But even this advance has contributed to an increase in the sensitivity of the MicroBooNE detector over older neutrino detector design. 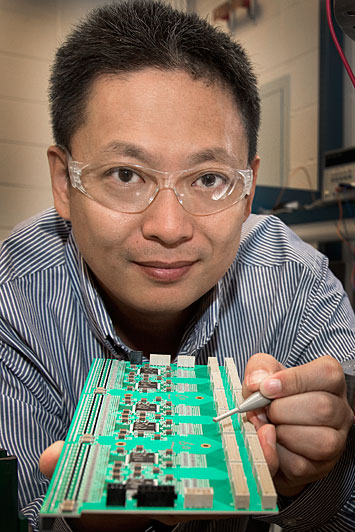 Brookhaven Lab physicist Hucheng Chen holding a replica of one of the 50 cold electronics boards installed in MicroBooNE.

“The noise that we measured in MicroBooNE is a factor of three smaller than we observe with similar detectors that use warm electronics,” says Hucheng Chen, a Brookhaven physicist who coordinated the integration of the sensors and the cold electronics.

But physicists would like to drive these improvements further. Nambiar and her colleagues are now designing much higher complexity cold microelectronics for the digitization stage of signal processing, which will be incorporated into future neutrino detectors. Digitizing the signal in the cold could lead to further improvements in detector sensitivity, as a digital signal is less susceptible to interference than analog.

“With an analog signal you can introduce noise and completely mess up the signal, but with digital you just have two choices, zeros and ones. Even if there is some noise on the one, you still know that it is a one,” she says, so the digitally encoded signal is preserved better when carried on long cables.

Brookhaven will again be at the forefront in designing these further improvements, possibly for implementation in detectors for future experiments, such as the U.S.-hosted international Deep Underground Neutrino Experiment, where the far detector will be over 600 times larger than MicroBooNE.

“Independent of their size and complexity, the development of specialized detectors requires a deep understanding of the underlying physics and the use of a number of advanced technologies, including microelectronics,” said De Geronimo. “Brookhaven Laboratory has built a nearly optimal environment for advancing this field through decades of successful detector developments and careful selection of talented scientists, engineers, and technicians.”

The development of these electronics was funded by the DOE Office of Science (HEP).