Steering Conversion of CO2 and Ethane to Desired Products 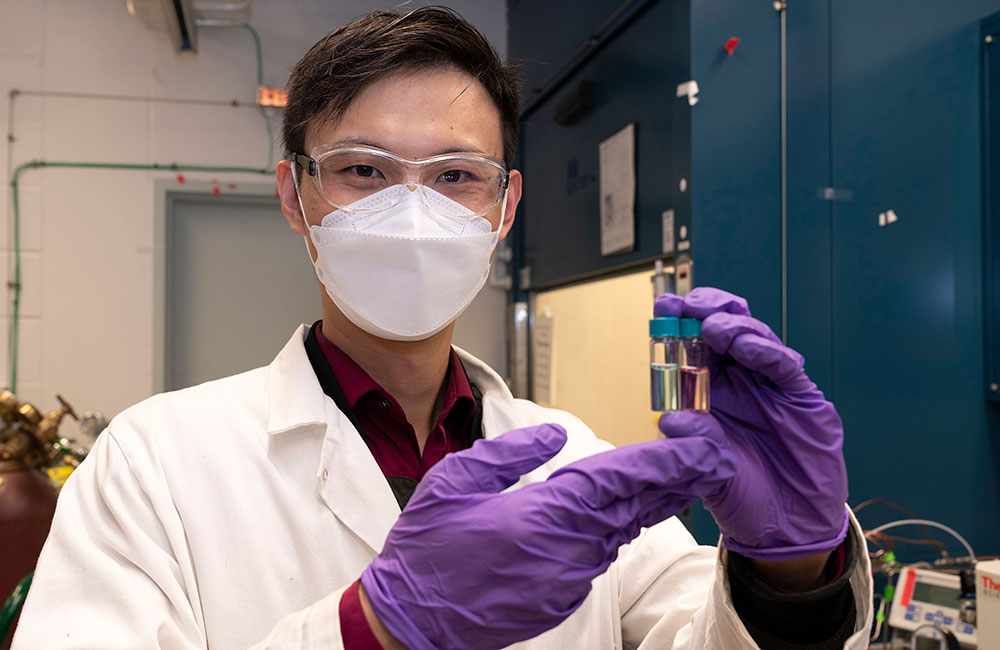 Zhenhua Xie, a research associate in Brookhaven Lab's Chemistry Division, holds precursor solutions for the synthesis of catalysts. He is first author on a paper describing the characteristics of a particular catalyst that determine its selectivity for converting CO2 and ethane to either syngas or ethylene.

UPTON, NY—Converting carbon dioxide (CO2) and ethane—an underutilized component of natural gas—into things we need would be a great way to put a potent greenhouse gas and an unused reservoir of hydrocarbons to work. But driving such reactions specifically toward one desired product or another can be a challenge. Discovering the underlying principles that determine the behavior of catalysts—the chemical “deal makers” that bring reactants together—could provide the key to more selective reactions.

In a study just published in the Journal of the American Chemical Society, chemists from the U.S. Department of Energy’s Brookhaven National Laboratory, Columbia University, and Binghamton University describe the features that determine catalytic selectivity for one set of reactions: transforming CO2 and ethane (C2H6) into synthesis gas (useful for generating electricity or making liquid fuels) or, alternatively, ethylene (a building block for making paints, plastics, and other polymers).

“Both pathways are valuable, but you want to be able to drive the reaction selectively to one or the other to make it easier and more economical to extract the desired product,” said Jingguang Chen, a chemist with a joint appointment at Brookhaven and Columbia who led the research. “We were trying to identify the key catalytic principles that make it select one pathway or another, with the idea that these principles could then guide the design of catalysts for an even wider range of reactions.”

To discover the key principles, the team conducted detailed studies of a series of bimetallic (two-metal) catalysts—using different metals paired with palladium. For each combination, they examined how the metals come together and measured how the mix of reactants and products changes during the reaction.

The modeling studies used “density functional theory” (DFT) to predict how the arrangement of atoms that make up the catalyst changes as the reaction progresses, based on things like the binding energies between different sets of atoms and the energies needed to break and remake chemical bonds.

“For both theory and experiment, we looked not just at the catalyst samples as they were originally prepared, but also as they undergo phase transformations during the reaction,” said Ping Liu, an expert in DFT calculations in the Catalysis Reactivity and Structure group of Brookhaven’s Chemistry Division.

“When we put two metals together,” Chen explained, “they stay in one structure we call a bulk alloy. But under reaction conditions, when you expose the catalyst to CO2 and ethane, those metals start to move. This is why a synchrotron like NSLS-II is really critical, because the high intensity photon source allows us to measure the electronic and physical structures of the active sites under reaction conditions,” he said.

Chen agreed. “Without any one of these techniques, we would not have reached our conclusions. And we can only really do this in a national laboratory setting where there are facilities and expertise across all these areas,” he said.

So, what were those conclusions? The discovery of two key principles, or descriptors, that determine whether and how the metal atoms move, and how those shifts drive reaction selectivity.

The key principles are: 1) the “formation energy” of the bimetallic catalyst—how tightly bound together the two metals are, and 2) the binding energy between the catalyst and oxygen released from the CO2 during the reaction.

If the two metals are bound together strongly (e.g., when palladium is paired with cobalt), the catalyst won’t bind with the freed oxygen and will remain an alloy, as shown in the top half of the illustration. This catalytic arrangement favors the breaking of carbon-carbon bonds, selectively transforming CO2 and ethane into carbon monoxide and hydrogen gas—the components of syngas.

But if the catalyst’s affinity for freed oxygen is strong enough to overcome the formation energy of the alloy—as is the case for palladium paired with indium—the paired metal will move to the surface of the catalyst to form an oxide shell. That configuration favors breaking carbon-hydrogen bonds, driving the pathway that produces ethylene.

The other metals the scientists paired with palladium fell somewhere between these two extremes. Scientists used the full dataset to extract the two key principles.

“By using the descriptors we’ve identified, now we can help guide the design of catalysts for either pathway—to make either syngas or ethylene,” Chen said.

In addition, as Liu pointed out, “these are generalized descriptors, which means they are not only applicable for one or two specific catalysts. Our experiments and theory prove that this approach works for the palladium-based catalysts. We think that could be extended for other bimetallic catalysts, which is something we will be looking at in the future.

Zhenhua Xie and Xuelong Wang (both of Brookhaven Lab) and Xiaobo Chen (Binghamton) were additional co-authors on this study. The work was funded by the DOE Office of Science (BES).