The following news release was issued by the Center for Jewish History.

Gertrude S. Goldhaber's papers reflect the struggle of women in STEM and the turbulent history of physics from 1930s Germany to the Cold War 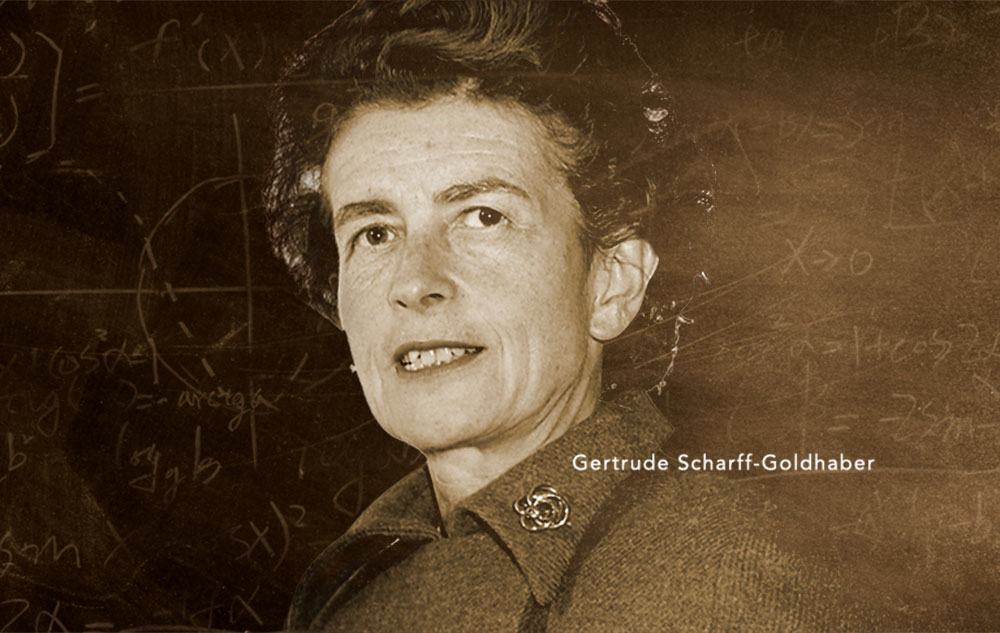 Gertrude S. Goldhaber (1911-1998) was a trailblazer who kept beating the odds. Born into a Jewish family in Germany in 1911, she overcame persecution based on her heritage as well as lifelong discrimination against women in the sciences to eventually become the first female physicist at the Brookhaven National Laboratory and the third female physicist in the National Academy of Sciences.

Her many achievements are reflected in her archival papers, held by the Leo Baeck Institute at the Center for Jewish History. Thanks to funding from the American Institute of Physics, archivists at the Center recently completed processing Dr. Goldhaber’s papers – a key step in opening this important set of records for research now and preserving them for posterity. A detailed description of the collection (finding aid) is now available online, and digital images of the materials will be available online later this year.

The Center was one of only three awardees in 2021 for the American Institute of Physics’ Grants to Archives program, sharing the honor (and same amount of funding) with Virginia Tech for the papers of Robert E. Marshak and the University of Vienna for the papers of Erwin Schrödinger.

“Gertrude Goldhaber’s papers and those of her husband, Maurice, are among the most important science-related collections we hold. They join papers from Nobel prize laureates, other members of the National Academy of Sciences, and even a collection from Albert Einstein and his family,” said Renate Evers, the Bruno and Suzanne Scheidt Director of Collections at the Leo Baeck Institute.

“Gertrude Goldhaber’s papers reflect the struggle of women in STEM and the turbulent history of physics from 1930s Germany through the Cold War,” said Rachel Miller, Chief of Archive and Library Services at the Center. “Because of the size and significance of both Gertrude and Maurice’s papers, we have been working together with our partner, the Leo Baeck Institute, to secure special funding to process both collections. Funding from the American Institute of Physics allowed us to kickstart this major project and process Gertrude’s papers. We are thrilled that the guide to the Gertrude S. Goldhaber Collection is complete and available to researchers.”

Born in 1911 in Mannheim, Germany, Gertrude showed talent in mathematics and science from a young age, and her parents supported her passion. Modern physics was developing rapidly when Gertrude started university, attending lectures from some of the field’s most prominent minds (Erwin Schroedinger, Max Planck, Albert Einstein). It was a time of enormous excitement in the field, with the discovery of the neutron in 1932, as well as time of greater innocence before the development of nuclear weapons. Shortly after completing her PhD at the University of Munich in 1935, she fled Nazi Germany to London, where she found work in George P. Thomson’s laboratory. In England, she reconnected with Maurice Goldhaber, an Austrian-Jewish postdoctoral student in physics whom she’d met during her studies. The couple married in 1939 and immigrated to the United States, where Maurice joined the faculty of the University of Illinois at Urbana-Champaign. Strict interpretations of nepotism laws there made it impossible for Gertrude to hold a paid position at the university. Her only choice to remain active as a researcher was to work in her husband’s lab as an unpaid assistant. As such, she conducted research on nuclear fission that remained classified during World War II, including the first observation that one or more neutrons are emitted during spontaneous nuclear fission. In 1948, Gertrude and Maurice together devised an experiment that proved that beta particles are indistinguishable from electrons – an important finding in the understanding of elementary particles. In 1950, the Goldhabers accepted positions at the newly established Brookhaven National Laboratory on Long Island, NY. There, Gertrude was finally allowed to take on a full position in her own right, one which she held until retirement. At Brookhaven, she studied nuclei in excited states and made important contributions to what became the collective theory of nuclear motion, for which Aage Bohr and Ben Mottelson received a Nobel Prize. Gertrude Goldhaber also systematically researched the properties of nuclear levels across the periodic table and developed the variable moment of inertia model (VMI). She was elected to the American Physical Society in 1947 and to the National Academy of Sciences in 1972. She served on many professional committees, including several that sought stronger recognition for women in science and promoted science education for all. Dr. Goldhaber wrote, "The vicious cycle which was originally created by the overt exclusion of women from mathematics and science must be broken... [I]t is of the utmost importance to give a girl at a very early age the conviction that girls are capable of becoming scientists."

Highlights from the collection include nuclear fission research that Dr. Goldhaber conducted in the 1940s that was classified until the end of World War II, the full scope of her work at Brookhaven, and documentation of her advocacy efforts for women in STEM. Also included are notebooks and papers from her years as a student of physics in 1930s Germany as well as personal files such as letters from the 1940s with her parents, who perished in the Holocaust. Complementing this collection is a portrait of Gertrude Goldhaber as a young girl circa 1920 posed with her mother and sister, digitally preserved and available online.

Members of the media should contact Ilana Rosenbluth at irosenbluth@cjh.org (201) 240-0845 to schedule a Zoom, Skype, or phone interview.