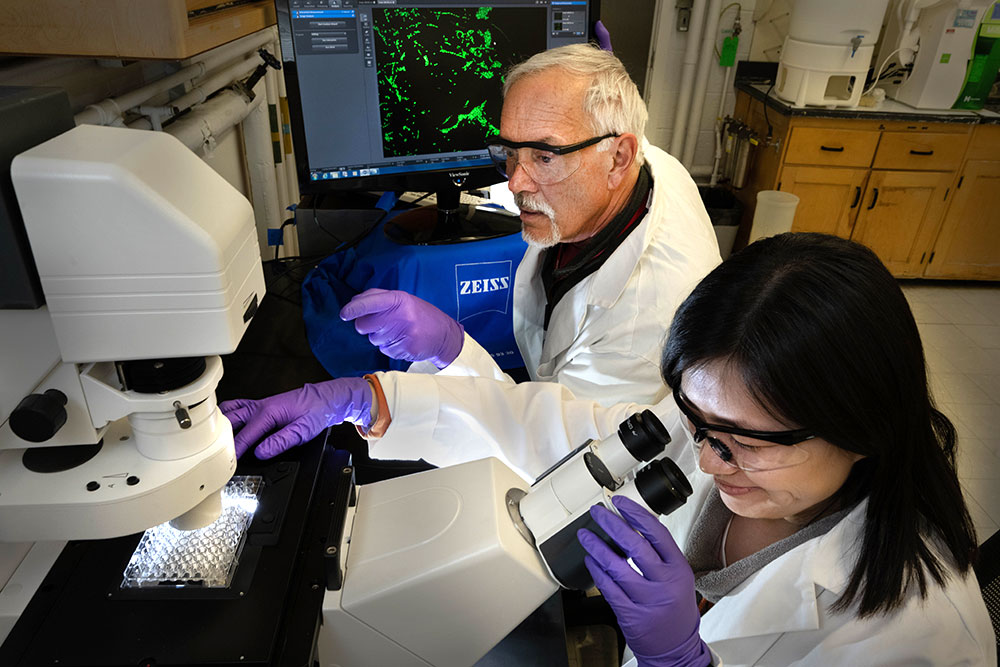 Brookhaven Lab biologist Paul Freimuth and co-author Feiyue Teng, a scientist in Brookhaven Lab's Center for Functional Nanomaterials (CFN), at the light microscope used to image bacteria in this study.

UPTON, NY—Biologists at the U.S. Department of Energy’s Brookhaven National Laboratory and their collaborators have discovered an aberrant protein that’s deadly to bacteria. In a paper just published in the journal PLOS ONE, the scientists describe how this erroneously built protein mimics the action of aminoglycosides, a class of antibiotics. The newly discovered protein could serve as a model to help scientists unravel details of those drugs’ lethal effects on bacteria—and potentially point the way to future antibiotics.

“Identifying new targets in bacteria and alternative strategies to control bacterial growth is going to become increasingly important,” said Brookhaven biologist Paul Freimuth, who led the research. Bacteria have been developing resistance to many commonly used drugs, and many scientists and doctors have been concerned about the potential for large-scale outbreaks triggered by these antibiotic-resistant bacteria, he explained.

“What we’ve discovered is a long way from becoming a drug, but the first step is to understand the mechanism,” Freimuth said. “We’ve identified a single protein that mimics the effect of a complex mixture of aberrant proteins made when bacteria are treated with aminoglycosides. That gives us a way to study the mechanism that kills the bacterial cells. Then maybe a new family of inhibitors could be developed to do the same thing.” 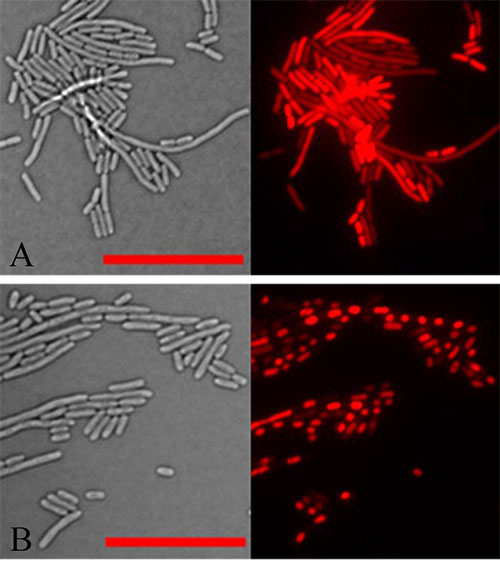 Light microscope images of E. coli cells in transmitted light (left) and reflected light that picks up the red fluorescence of a dye staining the cells' DNA (right). In normal cells (upper panel), the DNA is spread throughout the cells. But in cells expressing the aberrant plant protein identified in this study (bottom panel) all the DNA within each cell has collapsed into a dense mass. DNA condensation also occurs after bacteria have been treated with aminoglycoside antibiotics.

The Brookhaven scientists, who normally focus on energy-related research, weren’t thinking about human health when they began this project. They were using E. coli bacteria to study genes involved in building plant cell walls. That research could help scientists learn how to convert plant matter (biomass) into biofuels more efficiently.

But when they turned on expression of one particular plant gene, enabling the bacteria to make the protein, the cells stopped growing immediately.

“This protein had an acutely toxic effect on the cells. All the cells died within minutes of turning on expression of this gene,” Freimuth said.

Understanding the basis for this rapid inhibition of cell growth made an ideal research project for summer interns working in Freimuth’s lab.

“Interns could run experiments and see the effects within a single day,” he said. And maybe they could help figure out why a plant protein would cause such dramatic damage.

“That’s when it really started to get interesting,” Freimuth said.

The group discovered that the toxic factor wasn’t a plant protein at all. It was a strand of amino acids, the building blocks of proteins, that made no sense.

This nonsense strand had been churned out by mistake when the bacteria’s ribosomes (the cells’ protein-making machinery) translated the letters that make up the genetic code “out of phase.” Instead of reading the code in chunks of three letters that code for a particular amino acid, the ribosome read only the second two letters of one chunk plus the first letter of the next triplet. That resulted in putting the wrong amino acids in place.

“It would be like reading a sentence starting at the middle of each word and joining it to the first half of the next word to produce a string of gibberish,” Freimuth said.

“This protein had an acutely toxic effect on the cells.”

“If a bacterial cell has 50,000 ribosomes, each one churning out a different aberrant protein, does the toxic effect result from one specific aberrant protein or from a combination of many? This question emerged decades ago and had never been resolved,” Freimuth said.

The new research shows that just a single aberrant protein can be sufficient for the toxic effect.

That wouldn’t be too farfetched. Nonsense strands of amino acids can’t fold up properly to become fully functional. Although misfolded proteins get produced in all cells by chance errors, they usually are detected and eliminated completely by “quality control” machinery in healthy cells. Breakdown of quality control systems could make aberrant proteins accumulate, causing disease.

The next step was to find out if the aberrant plant protein could activate the bacterial cells’ quality control system—or somehow block that system from working.

Freimuth and his team found that the aberrant plant protein indeed activated the initial step in protein quality control, but that later stages of the process directly required for degradation of aberrant proteins were blocked. They also discovered that the difference between cell life and death was dependent on the rate at which the aberrant protein was produced.

The same thing happens, he noted, in cells treated with sublethal doses of aminoglycoside antibiotics. “The quality control response was strongly activated, but the cells still were able to continue to grow,” he said.

These experiments indicated that the single aberrant plant protein killed cells by the same mechanism as the complex mixture of aberrant proteins induced by aminoglycoside antibiotics. But the precise mechanism of cell death is still a mystery.

“The good news is that now we have a single protein, with a known amino acid sequence, that we can use as a model to explore that mechanism,” Freimuth said.

Scientists know that cells treated with the antibiotics become leaky, allowing things like salts to seep in at toxic levels. One hypothesis is that the misfolded proteins might form new channels in cellular membranes, or alternatively jam open the gates of existing channels, allowing diffusion of salts and other toxic substances across the cell membrane.

“A next step would be to determine structures of our protein in complex with membrane channels, to investigate how the protein might inhibit normal channel function,” Freimuth said.

That would help advance understanding of how the aberrant proteins induced by aminoglycoside antibiotics kill bacterial cells—and could inform the design of new drugs to trigger the same or similar effects.

This work was supported by a Laboratory Directed Research and Development award from Brookhaven Lab and in part by the DOE Office of Science, Office of Workforce Development for Teachers and Scientists (WDTS) under the Visiting Faculty Program (VFP). Additional funding from the National Science Foundation (NSF) supported students participating in internships under NSF’s Science, Technology, Engineering, and Mathematics Talent Expansion Program (STEP) and the Louis Stokes Alliances for Minority Participation (LSAMP) program.