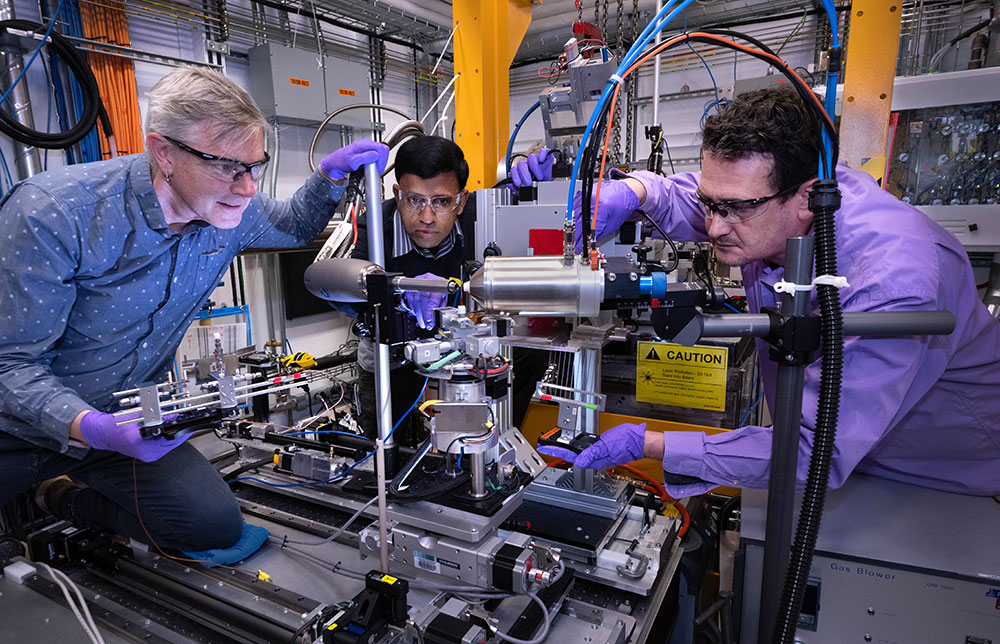 Brookhaven Lab members of the research team: Simon Billinge, Milinda Abeykoon, and Emil Bozin adjust instruments for data collection at the Pair Distribution Function beamline of the National Synchrotron Light Source II. In this setup, a stream of hot air heats samples with degree-by-degree precision as x-rays collect data on how the material changes.

UPTON, NY—In a world of materials that normally expand upon heating, one that shrinks along one 3D axis while expanding along another stands out. That’s especially true when the unusual shrinkage is linked to a property important for thermoelectric devices, which convert heat to electricity or electricity to heat.

In a paper just published in the journal Advanced Materials, a team of scientists from Northwestern University and the U.S. Department of Energy’s Brookhaven National Laboratory describe the previously hidden sub-nanoscale origins of both the unusual shrinkage and the exceptional thermoelectric properties in this material, silver gallium telluride (AgGaTe2). The discovery reveals a quantum mechanical twist on what drives the emergence of these properties—and opens up a completely new direction for searching for new high-performance thermoelectrics.

“Thermoelectric materials will be transformational in green and sustainable energy technologies for heat energy harvesting and cooling—but only if their performance can be improved,” said Hongyao Xie, a postdoctoral researcher at Northwestern and first author on the paper. “We want to find the underlying design principles that will allow us to optimize the performance of these materials,” Xie said. 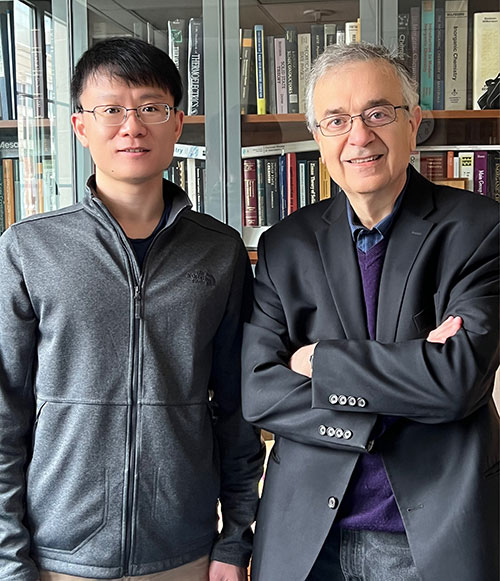 Hongyao Xie, a postdoctoral researcher at Northwestern University, with Mercouri Kanadzidis, the professor who led this study of a promising thermoelectric material in collaboration with Brookhaven Lab.

Thermoelectric devices are currently used in limited, niche applications, including NASA’s Mars rover, where heat released by the radioactive decay of plutonium is converted into electricity. Future applications might include materials controlled by voltage to achieve very stable temperatures critical for operation of high-tech optical detectors and lasers.

The main barrier to wider adoption is the need for materials with just the right cocktail of properties, including good electrical conductivity but resistance to the flow of heat.

“The trouble is, these desirable properties tend to compete,” said Mercouri Kanadzidis, the Northwestern professor who initiated this study. “In most materials, electronic conductivity and thermal conductivity are coupled and both are either high or low. Very few materials have the special high-low combination.”

The Northwestern scientists turned to colleagues and tools at Brookhaven Lab to find out why.

“It took a meticulous x-ray examination at Brookhaven’s National Synchrotron Light Source II (NSLS-II) to reveal a previously hidden sub-nanoscale distortion in the positions of the silver atoms in this material,” said Brookhaven Lab physicist Emil Bozin, leader of the structural analysis.

Computational modeling revealed how those distortions trigger the one-axis crystal shrinkage—and how that structural shift scatters atomic vibrations, thus blocking the propagation of heat in the material.

But even with that understanding, there was no clear explanation of what was driving the sub-nanoscale distortions. Complementary computational modeling by Christopher Wolverton, a professor at Northwestern, indicated a novel and subtle quantum mechanical origin for the effect.

Together the findings point to a new mechanism for turning down thermal conductivity and a new guiding principle in the search for better thermoelectric materials.

The team used x-rays at NSLS-II’s Pair Distribution Function (PDF) beamline to map out the “large” scale arrangement of atoms in both copper gallium telluride and silver gallium telluride over a range of temperatures to see if they could discover why these two materials behave differently.

“A stream of hot air heats the sample with degree-by-degree precision,” said Milinda Abeykoon, who is the lead scientist of the PDF beamline. “At each temperature, as the x-rays bounce off the atoms, they produce patterns that can be translated into high spatial resolution measurements of the distances between each atom and its neighbors (each pair). Computers then assemble the measurements into the most likely 3D arrangements of the atoms.”

Nanoscale distortions: The side view of a basic AgGaTe2 building block (left) shows the silver (Ag) atom at the center of a 3D tetrahedron. In the top-down view (center), heating causes Ag to shift off center in one of four directions indicated by the black arrows. A shift toward a particular edge (bold arrow) forces the tellurium (Te) atoms on that edge to move apart (purple arrows) while the Te atoms on the opposite edge move closer together. In the larger crystal lattice, where connected tetrahedra share Te atoms at corners (right), the atomic shifts (black and purple arrows) become correlated, causing adjacent tetrahedra to rotate with respect to one another (red curved arrow).

The team also did additional measurements over a wider range of temperatures but at lower resolution using the light source at the Deutsches Elektronen-Synchrotron (DESY) in Hamburg, Germany. And they extrapolated their results down to a temperature of absolute zero, the coldest anything can get.

The data show that both materials have a diamond-like tetragonal structure of corner-connected tetrahedra, one with a single copper atom and the other with silver at the center of the 3D object’s tetrahedral cavity. Describing what happened as these diamond-like crystals were heated, Bozin said, “Immediately we saw a big difference between the silver and copper versions of the material.”

The crystal with copper at its core expanded in every direction, but the one containing silver expanded along one axis while shrinking along another.

“This strange behavior turned out to have its origin in the silver atoms in this material having very large amplitude and disorderly vibrations within structural layers,” said Simon Billinge, a professor at Columbia University with a joint appointment as a physicist at Brookhaven. “Those vibrations cause the linked tetrahedra to jiggle and jump with large amplitude,” he said.

This was a clue that the symmetry—the regular arrangement of atoms—might be “broken” or disrupted at a more “local” (smaller) scale.

The team turned to computational modeling to see how various local symmetry distortions of the silver atoms would match with their data.

“The one that worked the best showed that the silver atom goes off center in the tetrahedron in one of four directions, toward the edge of the crystal formed by two of the tellurium atoms,” Bozin said. On average, the random, off-center shifts cancel out, so the overall tetragonal symmetry is retained.

“But we know the larger scale structure changes too, by shrinking in one direction,” he noted. “As it turns out the local and larger scale distortions are linked.” 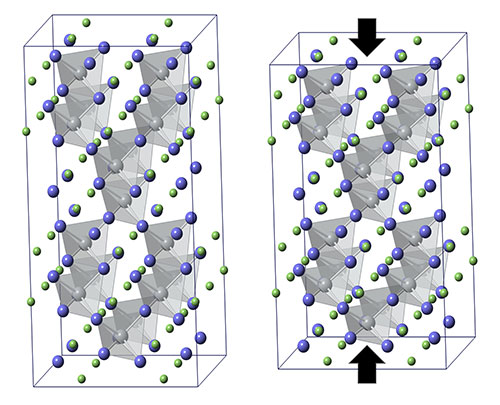 Macroscale contraction: In the undistorted large scale AgGaTe2 crystal (left), a single silver atom (gray) sits at the center of each tetrahedral cavity. Upon heating, as the off-centering shifts of silver atoms within adjacent tetrahedra become correlated, the resulting rotation causes the whole macroscopic crystal to shrink in one direction (large black arrows) while expanding in another (not shown). These distortions scatter vibrations that propagate heat through the material, giving it the low thermal conductivity that makes it a promising thermoelectric material.

“The local distortions are not completely random,” Bozin explained. “They are correlated among adjacent silver atoms—those connected to the same tellurium atom. These local distortions cause adjacent tetrahedra to rotate with respect to one another, and that twisting causes the crystal lattice to shrink in one direction.”

But why do the silver atoms shift in the first place?

The Brookhaven scientists had seen similar behavior a decade earlier, in a rock-salt like lead-telluride material. In that case, as the material was heated, “lone pairs” of electrons formed, generating tiny areas of split electric charge, called dipoles. Those dipoles pulled centrally located lead atoms off center and scattered phonons.

“But in silver gallium telluride there are no lone pairs. So, there must be something else in this material—and probably other ‘diamondoid’ structures as well,” Bozin said.

Christopher Wolverton’s calculations at Northwestern revealed that “something else” to be the bonding characteristics of the electrons orbiting the silver atoms.

“Those calculations compared the silver and copper atoms and found that there is a difference in the arrangement of electrons in the orbitals such that silver has a tendency to form weaker bonds than copper,” said Northwestern’s Xie. “Silver wants to bond with fewer neighboring tellurium atoms; it wants a simpler bonding environment.”

So instead of binding equally with all four surrounding tellurium atoms, as copper does, silver tends to preferentially (but randomly) move closer to two of the four. Those bonding electrons are what pull the silver atom off center, triggering the twisting, shrinkage, and vibrational changes that ultimately lower thermal conductivity in AgGaTe2.

“We’ve stumbled upon a new mechanism by which lattice thermal conductivity can be reduced,” Northwestern’s Mercouri Kanadzidis said. “Perhaps this mechanism can be used to engineer, or look for, other new materials that have this type of behavior for future high-performance thermoelectrics.”