Signs of Saturation Emerge from Particle Collisions at RHIC

Members of the STAR collaboration report new data that indicate nuclei accelerated to very high energies at the Relativistic Heavy Ion Collider (RHIC) may be reaching a state where gluons are starting to saturate.

UPTON, NY—Nuclear physicists studying particle collisions at the Relativistic Heavy Ion Collider (RHIC)—a U.S. Department of Energy Office of Science user facility at DOE’s Brookhaven National Laboratory—have new evidence that particles called gluons reach a steady “saturated” state inside the speeding ions. The evidence is suppression of back-to-back pairs of particles emerging from collisions between protons and heavier ions (the nuclei of atoms), as tracked by RHIC’s STAR detector. In a paper just published in Physical Review Letters, the STAR collaboration shows that the bigger the nucleus the proton collides with, the larger the suppression in this key signature, as predicted by theoretical models of gluon saturation.

“We varied the species of the colliding ion beam because theorists predicted that this sign of saturation would be easier to observe in heavier nuclei,” explained Brookhaven Lab physicist Xiaoxuan Chu, a member of the STAR collaboration who led the analysis. “The good thing is RHIC, the world’s most flexible collider, can accelerate different species of ion beams. In our analysis, we used collisions of protons with other protons, aluminum, and gold.”

Saturation should be easier to see in aluminum, and even easier in gold, when compared to simpler protons, Chu explained, because these bigger nuclei have more protons and neutrons, each made up of quarks and gluons.

As nuclei are accelerated close to the speed of light, they become flattened like pancakes. This flattening causes the large number of gluons within the nuclei—generated by individual gluons splitting—to overlap and recombine. If gluon recombination balances out gluon splitting, the nuclei reach a steady state called gluon saturation.

Previous experiments have shown that when ions are accelerated to high energies, gluons split, one into two, to multiply to very high numbers. But scientists suspect that gluon multiplication can’t go on forever. Instead, in nuclei moving close to the speed of light, where relativistic motion flattens the nuclei into speeding gluon “pancakes,” overlapping gluons should start to recombine.

“If the rate of two gluons recombining into one balances out the rate of single gluons splitting, gluon density reaches a steady state, or plateau, where it is not going up or going down. That is saturation,” Chu said. “Because there are more gluons and more overlapping gluons in larger nuclei, these bigger ions should show signs of recombination and saturation more readily than smaller ones,” she added.

To search for those signs, the STAR scientists scanned data collected in 2015 for collisions where a pair of “pi zero” particles hit STAR’s forward meson spectrometer in a back-to-back configuration. In this case, back-to-back means 180 degrees from one another around a circular target at the end of the detector in the forward-going direction of the probing proton beam. These collisions select for interactions between a single high-energy quark from the probing proton with a single low-momentum gluon in the target ion (proton, aluminum, or gold).

“We use the quark from the proton like a tool, or probe, to study the gluon inside the other ion,” Chu said.

STAR scientists searched for signs of saturation in collisions of a proton (black) with a nucleus (multicolored). By tracking events where a pair of neutral pion particles (π0) strikes a forward detector at back-to-back positions, they select for interactions between a high-momentum-fraction quark from the proton and a low-momentum-fraction gluon from the nucleus. In large nuclei they saw suppression of this back-to-back signal. This suppression—a key prediction of models describing a saturated state of gluons—likely results from multiple gluon scatterings and recombination of abundant overlapping gluons.

The team was particularly interested in the “low momentum fraction” gluons—the multitude of gluons that each carry a tiny fraction of the overall momentum of the nucleus. Experiments at the HERA accelerator in Germany (1992-2007) have shown that, at high energy, protons and all nuclei are dominated by these low-momentum-fraction gluons.

In the proton-proton collisions, the quark-gluon interactions are very straightforward, Chu explained. “The two particles—quark and gluon—hit each other and generate two pi zero particles back-to-back,” she said.

But when a quark from the proton strikes a gluon in a larger flattened-out nucleus, where many gluons overlap, the interactions can be more complex. The quark—or the struck gluon—might strike multiple additional gluons. Or the gluon might recombine with another gluon, losing all “memory” of its original tendency to emit a pi zero.

“So, the proton-proton collisions give us a baseline,” said Chu. “In these collisions we don’t have saturation because there aren’t enough gluons and not enough overlap. To look for saturation, we compare the observable of the two-particle correlation across the three collision systems.”

The results came out just as the theories predicted, with the physicists observing the fewest back-to-back correlated particles striking the detector in the proton-gold collisions, an intermediate level in proton-aluminum collisions, and the highest correlation in the baseline proton-proton collisions.

The suppression of the pi zero correlation in the larger nuclei, and the fact that the suppression gets stronger the larger the nucleus gets, are clear evidence, the scientists say, of gluon recombination needed to reach gluon saturation. 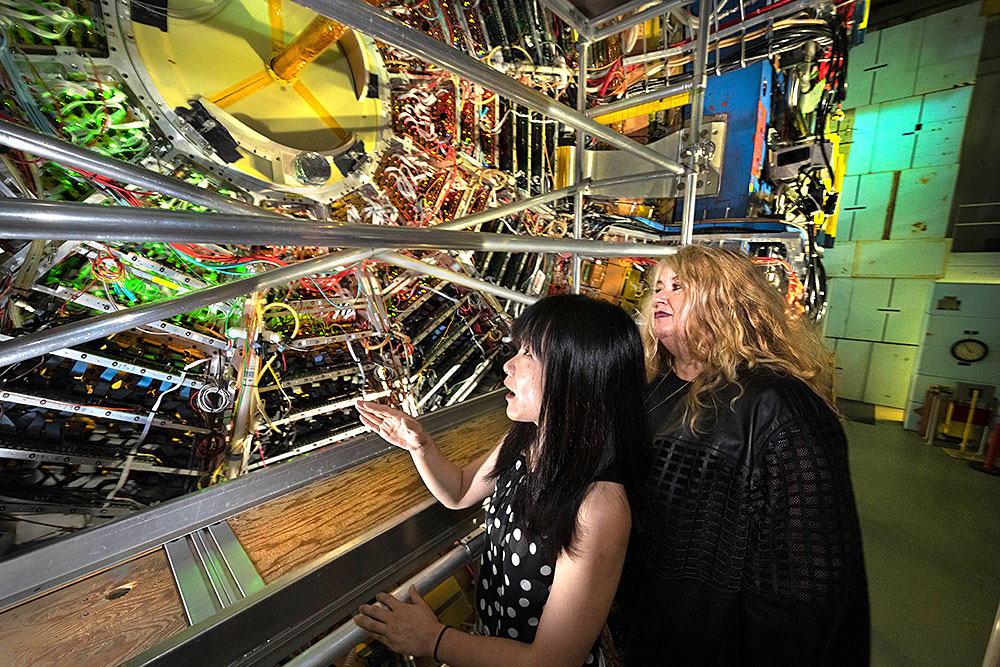 “STAR will follow up these measurements by collecting additional data in 2024 using recently upgraded forward detector components, tracking other observables that should also be sensitive to saturation,” explained Brookhaven Lab physicist Akio Ogawa, a member of the STAR collaboration and a key player in building the new forward STAR detector systems.

Together, the RHIC results will also be an important basis for very similar measurements at the future Electron-Ion Collider (EIC), being built at Brookhaven to collide electrons with ions.

According to Aschenauer, one of the physicists laying out the plans for research at that facility, “If we measure this now at RHIC, at a collision energy of 200 billion electron volts (GeV), that is very similar to the collision energy we will get at the EIC. That means we can use the same observable at the EIC to test whether recombination and saturation are universal properties of the nuclei, as predicted by the saturation models.”

Seeing the same result at both facilities, “would prove that these properties don’t depend on structure and type of the probe we use to study them,” she said.

This research was funded by the DOE Office of Science (NP), the National Science Foundation, and a range of international agencies spelled out in the published paper. The STAR team used computational resources at the RHIC and ATLAS Computing Facility/Scientific Data and Computing Center at Brookhaven Lab, the National Energy Research Scientific Computing Center (NERSC)—a DOE Office of Science user facility at Lawrence Berkeley National Laboratory—and the Open Science Grid consortium.