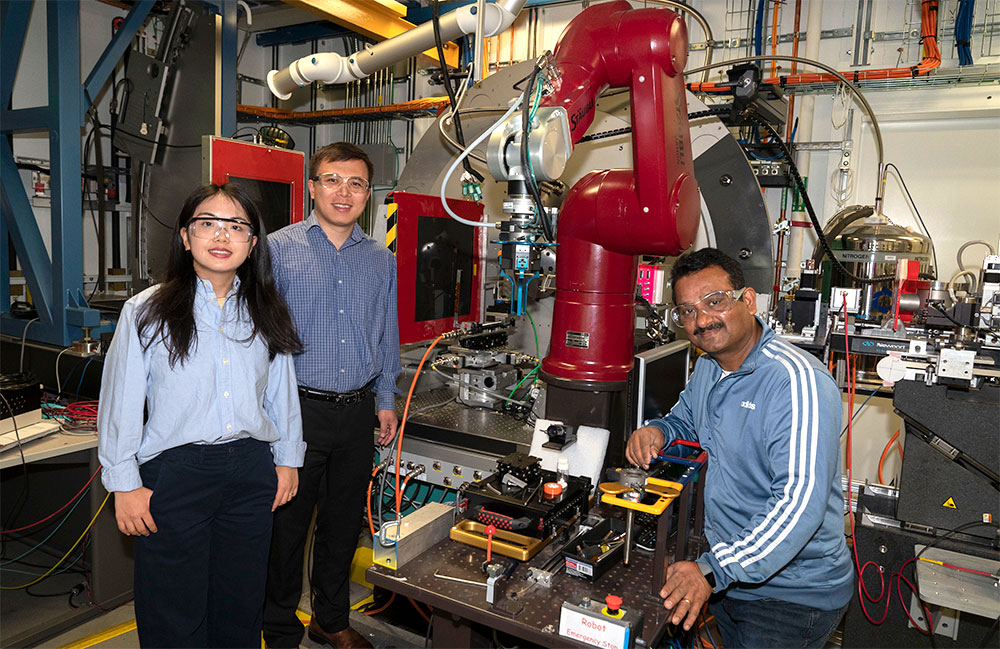 From left to right: Brookhaven chemists Sha Tan and Enyuan Hu with beamline scientist Sanjit Ghose at the NSLS-II X-ray Powder Diffraction (XPD) beamline. The team used XPD to reveal the elusive and complex chemical mechanisms of the interphase in lithium metal batteries.

UPTON, NY—Researchers around the world are on a mission to relieve a bottleneck in the clean energy revolution: batteries. From electric vehicles to renewable grid-scale energy storage, batteries are at the heart of society’s most crucial green innovations—but they need to pack more energy to make these technologies widespread and practical.

Now, a team of scientists led by chemists at the U.S. Department of Energy’s (DOE) Brookhaven National Laboratory and Pacific Northwest National Laboratory (PNNL) has unraveled the complex chemical mechanisms of a battery component that is crucial for boosting energy density: the interphase. Their work published today in Nature Nanotechnology.

To build a better battery for electric vehicles, researchers across several national laboratories and DOE-sponsored universities have formed a consortium called Battery500. Led by PNNL, the consortium aims to make battery cells with an energy density of 500 watt-hours per kilogram—more than double the energy density of today’s state-of-the-art batteries. To do so, the team is focusing on lithium metal batteries. While lithium-ion batteries rely on graphite anodes, these batteries use lithium metal anodes.

Lithium metal anodes provide a much higher energy density than graphite anodes, but there are trade-offs. One of the biggest challenges scientists currently face is finding a way to stabilize the anode as the battery charges and discharges.

In search of such a method, scientists at Brookhaven Lab and PNNL led an in-depth study on lithium metal batteries’ solid-electrolyte interphase. The interphase is a chemical layer formed between the anode and the electrolyte as a battery charges and discharges. Scientists have learned that the interphase is the key to stabilizing lithium metal batteries, but it is a very sensitive sample with convoluted chemistry, making it difficult to study and, therefore, difficult to fully understand.

“The interphase influences the cyclability of the whole battery. It’s a very important, but elusive system,” said Brookhaven chemist Enyuan Hu, who led the study. “Many techniques can damage this small, sensitive sample, which also has both crystalline and amorphous phases.”

The scientific community has conducted many studies using a variety of experimental techniques, including cryo-electron microscopy, to better understand the interphase—but the picture is still far from being clear and complete.

“A comprehensive understanding of the interphase provides the foundation for building an effective interphase,” said PNNL scientist Xia Cao, who co-led the study and led the development of the electrolyte. “The Battery500 Consortium strongly encourages collaborations. We have been collaborating with Brookhaven Lab closely on many scientific projects, especially understanding the interphase.”

To dive deeper into the complex and elusive chemistry of the interphase, the team turned to a one-of-a-kind tool called the National Synchrotron Light Source II (NSLS-II).

NSLS-II is a DOE Office of Science User Facility at Brookhaven Lab that generates ultrabright x-rays for studying the atomic-scale makeup of materials. Hu and colleagues have been leveraging the advanced capabilities of the X-ray Powder Diffraction (XPD) beamline at NSLS-II to make new discoveries in battery chemistry for many years. Building on their previous successes, the team returned to XPD to gather their most precise findings on the interphase yet.

“We’ve previously discovered that high energy synchrotron x-rays do not damage the interphase sample,” Hu said. “This is very important because one of the greatest challenges in characterizing the interphase is that the samples are highly sensitive to other types of radiation, including low energy x-rays. So in this work, we took advantage of two techniques that use high energy x-rays, x-ray diffraction and pair distribution function analysis, to capture the chemistries of both the crystalline and the amorphous phases in the lithium metal anode interphase.”

After cycling a lithium metal battery 50 times and harvesting enough interphase sample, the team disassembled the cell, scraped off a trace amount of interphase powder from the surface of the lithium metal, and directed XPD’s high energy x-rays at the sample to reveal its convoluted chemistry.

“XPD is one of the few beamlines in the world that is capable of carrying out this research,” said Sanjit Ghose, lead beamline scientist at XPD and a co-author of the study. “The beamline provided three advantages for this work: a small absorption cross section, which damages the sample less; combined techniques, x-ray diffraction to get the phase information and pair distribution function for real space information; and a high intensity beam for delivering quality data from a trace sample.”

This unique combination of advanced x-ray techniques provided the team with a detailed chemical map of the interphase components—their origins, functionalities, interactions, and evolutions.

Specifically, the team identified that lithium hydroxide, which can be found natively in the lithium metal anode, is the likely contributor to lithium hydride. Controlling the composition of this compound will help scientists design an improved interphase with the highest performance possible.

“Second, we studied lithium fluoride, which is very important for electrochemical performance, and found that it can be formed at a large scale in low concentration electrolytes,” Tan said.

“Third, we looked at lithium hydroxide to understand how it is consumed during battery cycling. These are all very new findings and important for understanding the interphase.”

Combined, these findings help shine a light on previously overlooked components of the interphase and will enable more accurate and controllable interphase design for lithium metal batteries.

Moving forward, the team is continuing to contribute additional studies to the Battery500 consortium. Battery500 is currently in its second phase, which will continue through 2026.

Pacific Northwest National Laboratory draws on its distinguishing strengths in chemistry, Earth sciences, biology and data science to advance scientific knowledge and address challenges in sustainable energy and national security. Founded in 1965, PNNL is operated by Battelle for the Department of Energy’s Office of Science, which is the single largest supporter of basic research in the physical sciences in the United States. DOE’s Office of Science is working to address some of the most pressing challenges of our time. For more information, visit https://energy.gov/science.