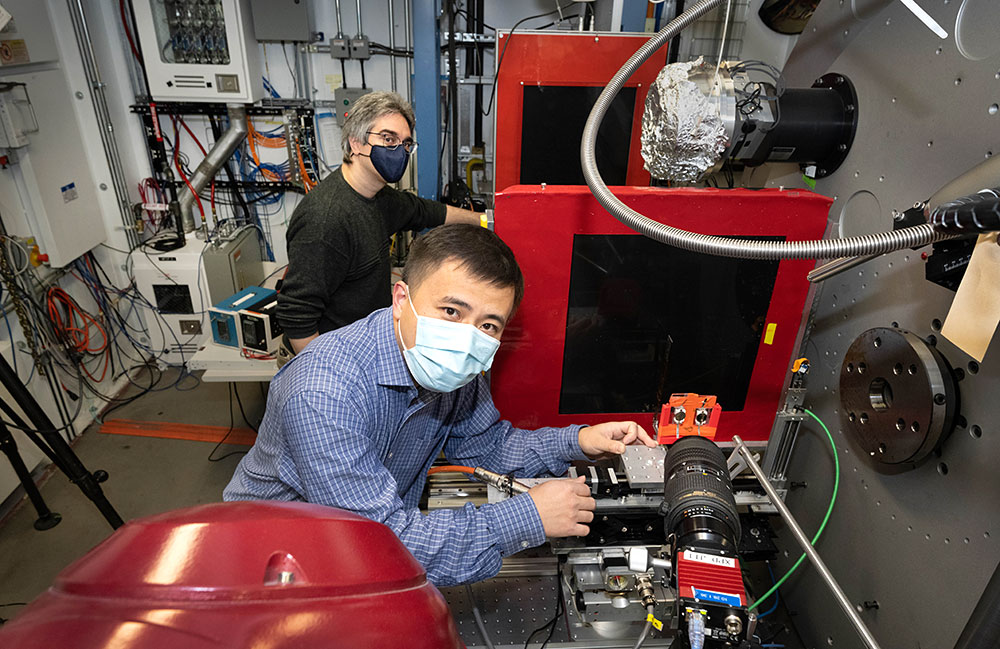 Enyuan Hu (front) and Peter Khalifah, two of the principal investigators for battery research projects that just received funding from the Department of Energy, at NSLS-II's X-ray Powder Diffraction beamline.

UPTON, NY— The U.S. Department of Energy (DOE) announced $209 million in funding for 26 new laboratory projects focusing on electric vehicles (EV), advanced batteries, and connected vehicles. Scientists from DOE’s Brookhaven National Laboratory will play key roles in two EV battery projects—one aimed at understanding and improving materials for battery anodes and cathodes and another to guide the design of safer electrolytes. The funding comes from the DOE’s Office of Energy Efficiency and Renewable Energy (EERE).

“President Biden’s Administration wants to make it easier for millions of American families and businesses to make the switch to electric vehicles,” said Secretary of Energy Jennifer M. Granholm in a DOE statement announcing the funding. “By developing smarter vehicle batteries, we can make these technologies cheaper and more accessible, while positioning America to be become a global leader of EV infrastructure production and clean energy jobs.”

Brookhaven Lab will be involved in projects aimed at understanding and refining the materials that make up all major components of batteries—the anode (negative electrode), cathode (positive electrode), and the electrolyte that shuttles charged ions from one electrode to the other as electrons move in the opposite direction through an outside circuit to provide power. (For rechargeable batteries, like the ones in electric vehicles, the whole system runs in a reversible manner, allowing for repeated charge and discharge cycles.)

Both Brookhaven projects will make use of research capabilities at two Brookhaven Lab user facilities, which operate with funding from the DOE Office of Science: the National Synchrotron Light Source II (NSLS-II), which produces extremely bright x-rays for studying a wide range of materials, and the Center for Functional Nanomaterials (CFN), home to a suite of electron microscopes and nanoscale fabrication tools. These facilities give scientists access to information about the atomic-level structure and chemical properties of battery materials, including under operating conditions. Scientists can use what they learn from these characterization studies to fine-tune and test new material designs with the goal of improving and optimizing performance. These two projects will be carried out by scientists in Brookhaven Lab’s Chemistry Division.

This animation shows the movement of lithium ions and electrons during charging and discharging (use) of a rechargeable battery. More information, including descriptive labels, can be found at DOE Explains: batteries.

As partners in “Battery500 Phase 2,” which is led by DOE’s Pacific Northwest National Laboratory (PNNL), a team of Brookhaven scientists will conduct studies to identify battery electrode materials with increased energy density. Such materials could reduce the size and weight of batteries used in electric vehicles and/or extend the vehicle’s driving distance for a given battery weight with better safety characteristics. Identifying lower-cost materials is another primary goal.

The total budget of Battery500 Phase 2 is $75M for the next 5 years. It is a renewal of funding for the original Battery500 Consortium, which was established in 2016.

Under the new funding arrangement, Brookhaven Lab will receive $1.3 million per year for the next five years. Brookhaven chemist Xiao-Qing Yang will serve as the general coordinator for the Battery500 Phase 2 consortium and as Brookhaven Lab’s point of contact. Brookhaven associate chemist Enyuan Hu is another principal investigator (PI) for this project. And Peter Khalifah, another Brookhaven PI, who holds a joint appointment at Stony Brook University, will serve as one of the two leaders of a cross-cutting thrust on materials characterization within the Consortium.

“Our team has made important discoveries over the past five years during Battery500 phase 1, which resulted in increased funding for Brookhaven and an increased project-leadership role for Battery500 Phase 2,” said Yang. “We are quite excited to be a member of this great consortium and confident in the success of this Phase 2 project.”

As an example of the success of the original Battery500 funding initiative, the Brookhaven team, working in collaboration with colleagues at PNNL and elsewhere, provided important insight into the electrochemical surface reactions of lithium metal anodes—one of the key components being explored to fulfill the energy density sought by Battery500. They also identified the failure mechanisms of these lithium metal anodes after long-term cycling. In addition, the team uncovered evidence that high voltage charging can induce strain and cracking in nickel-rich cathode materials, and developed exceptionally sensitive methods for quantifying defects associated with disorder across atomic sites. Results from these last two studies are guiding the design of improved cathodes.

In the next five years, the Brookhaven team will continue their efforts to develop and deploy sensitive characterization techniques that can illuminate the changes that occur in lithium metal anodes, metal oxide and sulfur cathodes, and new electrolytes during their use in rechargeable batteries. These efforts will help understand and overcome the factors limiting the performance of this exceptionally high energy density class of batteries and will accelerate the rate at which this technology can become commercially viable.

Another Brookhaven team, led by Enyuan Hu, will spearhead a new project to study solid state battery electrolytes. Electrolytes allow negatively and positively charged ions to flow between a battery’s anode and cathode. Most of today’s EV batteries use organic liquid electrolytes, which are highly volatile and flammable.

The Brookhaven team (one of 17 projects just awarded funding for studying solid state electrolytes under the new announcement) will conduct research on ceramic-polymer composite solid-state electrolytes. The total funding for this 5-year project is $2.5 million, including $300K per year for Brookhaven Lab and $200K per year for collaborators from Harvard and the University of California, Irvine.

This project leverages the electrolyte expertise within the Chemistry Division of Brookhaven Lab, the advanced characterization tools available at NSLS II and CFN, the ceramic and polymer expertise at Harvard and UC Irvine, and the established long-term collaboration among the three institutions.

“These important projects will help advance the development of electric vehicle batteries,” said Alex Harris, director of Brookhaven Lab’s Energy Sciences Directorate and acting chair of the Lab’s Chemistry Division. “We are grateful for the sustained funding for both the specific battery research projects and for the user facilities that enable the fundamental scientific studies that will push these technologies forward.”

U.S. Senator Kirsten Gillibrand (NY), in the DOE statement, said, “I am proud to have fought for this vital DOE funding to bring innovation home to New York State and our world-class Brookhaven National Laboratory. This investment is a down payment on a greener, more prosperous future for all of us, and I look forward to supporting more of these projects in the future.”