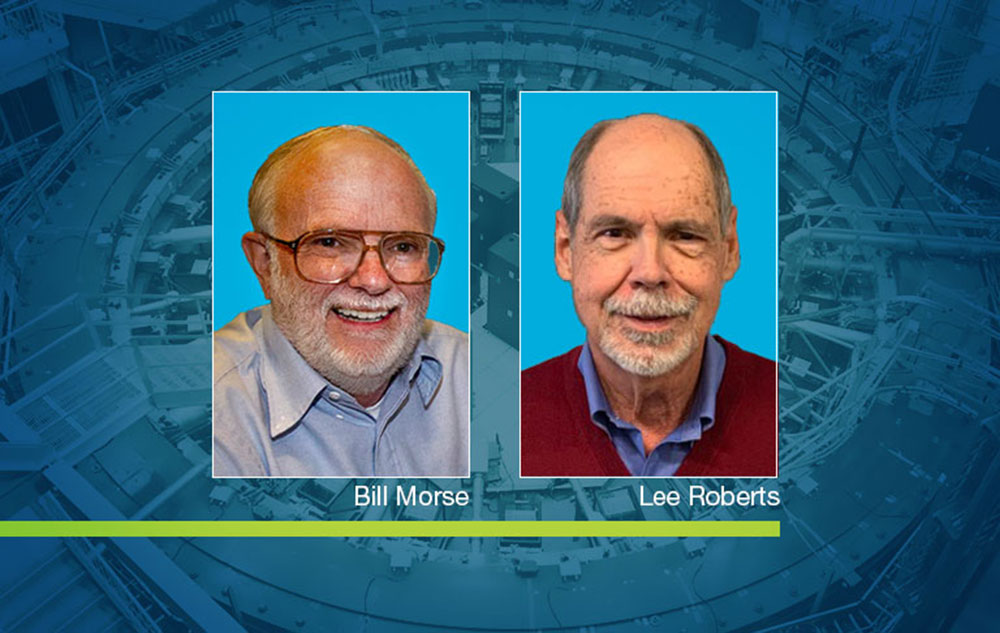 William M. Morse of Brookhaven Lab and Bradley Lee Roberts of Boston University will receive the Panofsky Prize in Experimental Particle Physics for their leadership of the muon g-2 experiment at Brookhaven Lab.

UPTON, NY—William M. Morse of the U.S. Department of Energy’s Brookhaven National Laboratory and Bradley Lee Roberts of Boston University will receive the American Physical Society’s 2023 W.K.H. Panofsky Prize in Experimental Particle Physics for their leadership of the muon g-2 experiment at Brookhaven Lab and its role in sparking a worldwide search for new physics. The physicists will receive the prize, consisting of $10,000 (shared equally) and a certificate citing their outstanding achievements in experimental particle physics at the APS April 2023 meeting to be held in Minneapolis, Minnesota.

The official citation for the pair reads as follows:

“For leadership and technical ingenuity in achieving a measurement of the muon anomalous magnetic moment with a precision suitable to probe Standard Model mediated loop diagrams and possible manifestations of new physics, which inspired a vibrant synergy between experimental and theoretical particle physics to determine a comparably precise Standard Model prediction and interpret the implications of a possible discrepancy.”

Morse and Roberts, together with Vernon Hughes of Yale University (deceased in 2003), led the “E821 g-2” experiment at Brookhaven Lab from construction (beginning in 1990) to first data collection in 1997 through publication of first results in 2001 and the final analysis in 2004.

This experiment made precision measurements of how the spin of muons—heavy subatomic cousins of electrons—precesses, or “wobbles,” as the particles move through the magnetic field of a large muon storage ring (see diagram). The findings revealed a discrepancy with predictions of muons’ spin precession that take into account the muons’ interactions with all known particles and forces in the Standard Model of particle physics. Though the level of significance was below that required for claiming a major discovery, the discrepancy was intriguing enough to hint that some factor “beyond the Standard Model”—a yet-to-be-discovered particle or interaction—might explain the muon’s aberrant behavior.

Schematic of Brookhaven Lab's muon g-2 experiment. Physicists compare their measurements of how the spins of muons precess, or "wobble," as the particles move around the storage ring with theoretical calculations that predict the precession based on how the muons interact with all known particles. If the measurements and theory match up, it increases confidence that the theory indeed includes all known particles. If there is a discrepancy, it may point to the existence of yet-to-be discovered particles or fields not included in those calculations.

Morse, Brookhaven’s resident spokesperson for the g-2 experiment, explained the beauty of the approach as follows:

“One can search for new massive particles by going to high energy, by E = mc2, or by making a precision measurement of the muon’s spin precession rate in our storage ring magnet. Classically, the vacuum has zero energy. However, the quantum vacuum in our storage ring knows about all the particles and forces, and this virtual froth affects the spin precession. Often the precision measurement is more sensitive to new physics than the high energy route.

“This beautiful experiment was made possible by all the dedicated engineers, technicians, and physicists who worked on it. This award recognizes all of our efforts,” he said.

Roberts, who served as co-spokesperson of the Brookhaven muon g-2 experiment, led the experiment program, and spearheaded the formation of the collaboration, said, “I am honored to share this prize with Bill Morse, who played a crucial role in the design and construction of the storage ring at Brookhaven, and in understanding the data while they were being analyzed.” He also noted that “the Brookhaven engineering and technical staff built an amazing storage ring magnet realizing the brilliant magnetic design of Brookhaven Lab physicist Gordon Danby.”

Brookhaven’s muon g-2 experiment launched a worldwide effort to improve the precision of both the theoretical predictions and the experimental measurements to see if the difference would widen. Both Morse and Roberts have played roles in this continuing quest. 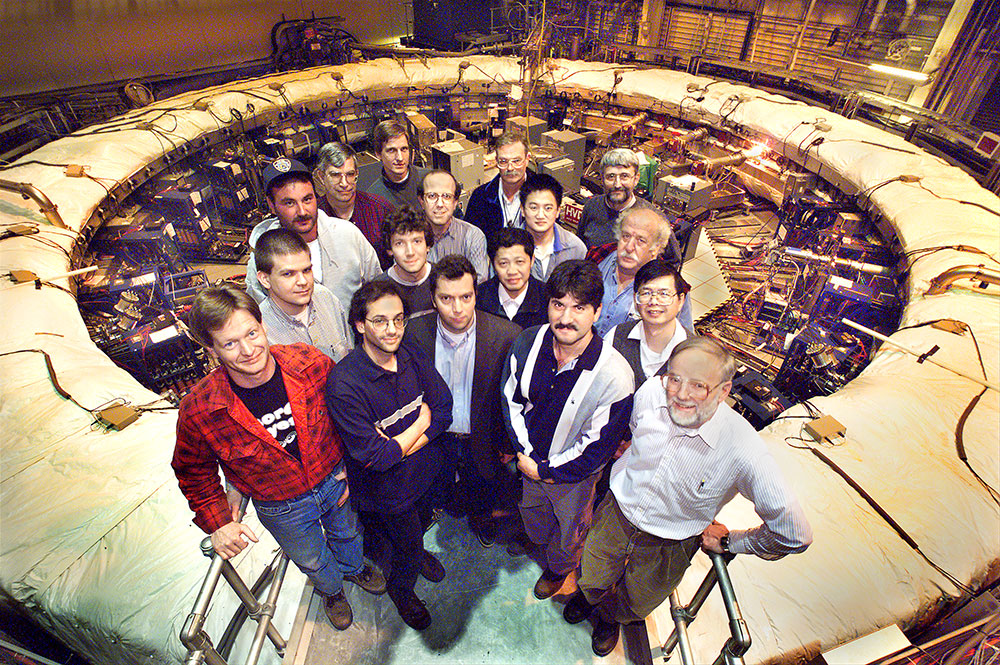 In 2013, under the guidance of both physicists and a large international team, Brookhaven Lab’s g-2 muon storage magnet embarked on an epic land-and-sea journey from Long Island, New York, to Fermi National Accelerator Laboratory outside of Chicago. There it was set up to repeat the experiment using Fermilab’s higher-intensity muon beam and other state-of-the-art technologies.

Roberts noted that the original magnet design, “permitted significant improvements to the magnetic field uniformity that were achieved after the ring was moved to Fermilab.” And Morse recalled how, after the “Big Move” and reassembly of the experiment, “our beautiful magnet was storing muons again.”

Both physicists are looking forward to where the story goes from here.

Morse acknowledged that, “To me, the most important result of the Brookhaven Lab g-2 experiment was all the young people who became physicists doing this beautiful physics.”

Roberts co-led the development of the Brookhaven Lab muon g-2 experiment science program. He recruited collaborators, worked with Vernon Hughes to obtain funding for the experiment, and orchestrated data analysis and publication of the results. His critical contributions included the design and construction of the fast pulsed magnet required to inject muons, generated by protons from Brookhaven’s Alternating Gradient Synchrotron (AGS), directly into the g-2 storage magnet. During the design and construction of the experiment, Roberts travelled to Brookhaven from Boston every other week. In early 1996, he spent a three-semester sabbatical leave in residence with his family on-site at Brookhaven to help ensure its success. His clear communication of the science behind g-2 played an important role in recruiting collaborators, sharing results, and laying the foundation for the Fermilab version of the experiment.

A professor in the Physics Department of Boston University, Roberts earned his Ph.D. in physics from the College of William and Mary (1974). Following his role as co-spokesperson for Brookhaven Lab’s g-2 experiment, he served as co-spokesperson of the Fermilab E989 Muon g-2 experiment. Previously, he developed prototype hardware for a neutron electric dipole moment search at Oak Ridge National Laboratory’s Spallation Neutron Source, and for the CPLEAR experiment's tests for charge-parity (CP) violation in kaons at the European Center for Nuclear Research (CERN). He has served on the SNOLAB Experimental Advisory Committee, as well as on the AGS Program Advisory Committee at Brookhaven Lab. He was named as a fellow of the American Physical Society in 1994 for his work at Brookhaven on hyperon physics, and is a member of the American Association for the Advancement of Science.

Morse, a physicist at Brookhaven and a leader in the experimental muon program at the Lab for over twenty-five years, was the resident spokesperson for Brookhaven’s muon g-2 experiment. For the Fermilab experiment, he coordinated moving the 15-meter diameter storage ring magnet off the Brookhaven site on the journey to Fermilab. He also led the writing of the beam/spin dynamics systematic error section of the Fermilab Conceptual Design Report and was the first Fermilab beam/spin dynamics systematic error coordinator.

With a Ph.D. in physics from Purdue University (1976), Morse has also been a leader in the study of rare kaon decays, including as spokesperson of Brookhaven Lab’s E845 experiment searching for charge/parity (CP) violation, and has authored multiple rare kaon decay articles. He was named as a fellow of the American Physical Society in 2006, and received Brookhaven Lab’s highest honor, a Science and Technology Award, in 2012.

The Brookhaven Lab and Fermilab muon g-2 experiments were funded primarily by the DOE Office of Science (HEP).