The following news release was issued today by the U.S. Department of Energy’s (DOE) Fermi National Accelerator Laboratory (Fermilab). It describes new results from the Muon g-2 experiment at Fermilab, which picks up a search for possible new physics following tantalizing hints of a discrepancy between theoretical predictions and results from an earlier Muon g-2 experiment at DOE’s Brookhaven National Laboratory. Brookhaven physicists are active members of the g-2 collaboration at Fermilab and have also been deeply involved in the theoretical calculations used for comparison with the experimental results, as well as the interpretation of experimental results. To learn more about Brookhaven’s role in this work, see the linked sidebar and the related links at the end of the news release. To interview Brookhaven scientists engaged in the new experiment or theoretical calculations, contact Karen McNulty Walsh, 631-344-8350, kmcnulty@bnl.gov. Brookhaven Lab will host a colloquium given by Brookhaven physicist Vladimir Tishchenko on Friday, April 9, 2021, at 11 a.m. U.S. Eastern Time to discuss the new result. 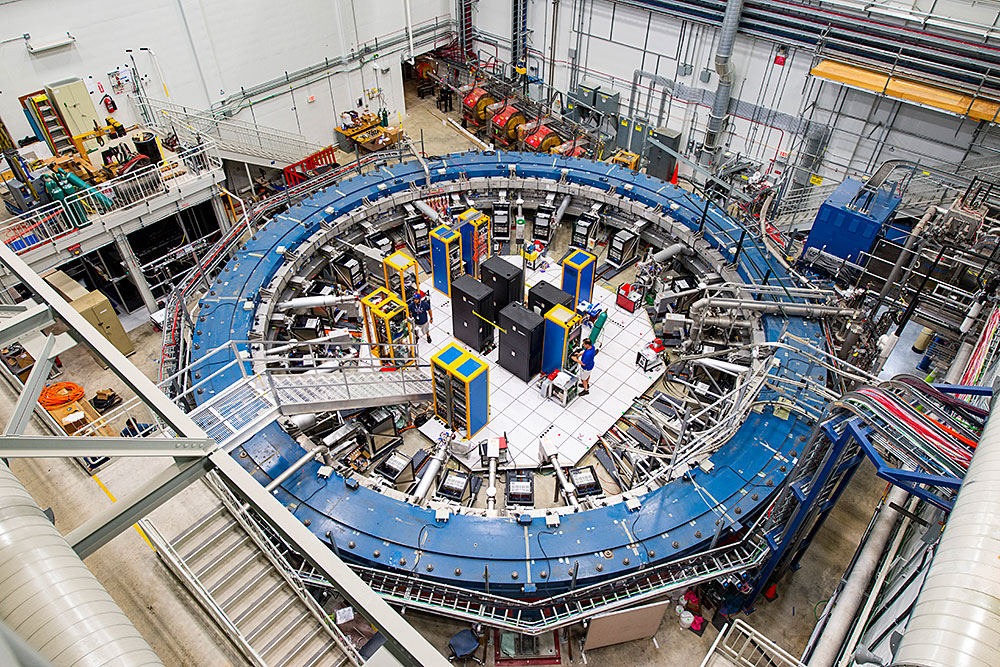 The Muon g-2 ring sits in its detector hall amidst electronics racks, the muon beamline, and other equipment. This impressive experiment operates at negative 450 degrees Fahrenheit and studies the precession (or wobble) of muons as they travel through the magnetic field. (Credit: Reidar Hahn, Fermilab)

The long-awaited first results from the Muon g-2 experiment at the U.S. Department of Energy’s Fermi National Accelerator Laboratory show fundamental particles called muons behaving in a way that is not predicted by scientists’ best theory, the Standard Model of particle physics. This landmark result, made with unprecedented precision, confirms a discrepancy that has been gnawing at researchers for decades.

The strong evidence that muons deviate from the Standard Model calculation might hint at exciting new physics. Muons act as a window into the subatomic world and could be interacting with yet undiscovered particles or forces.

“Today is an extraordinary day, long awaited not only by us but by the whole international physics community,” said Graziano Venanzoni, co-spokesperson of the Muon g-2 experiment and physicist at the Italian National Institute for Nuclear Physics. “A large amount of credit goes to our young researchers who, with their talent, ideas and enthusiasm, have allowed us to achieve this incredible result.”

“I still remember the day I learned about the Muon g-2 experiment for the first time, in an undergraduate nuclear physics lecture—and learning about the scheme of the experiment from our textbook. I said to myself ‘Wow! How smart those people were to come up with such a clever idea!’” recounted Brookhaven Lab physicist Vladimir Tishchenko, who is giving a colloquium on the new result at Brookhaven Lab on Friday, April 9, 2021, at 11 a.m. Read more about Brookhaven Lab and g-2.

A muon is about 200 times as massive as its cousin, the electron. Muons occur naturally when cosmic rays strike Earth’s atmosphere, and particle accelerators at Fermilab can produce them in large numbers. Like electrons, muons act as if they have a tiny internal magnet. In a strong magnetic field, the direction of the muon’s magnet precesses, or wobbles, much like the axis of a spinning top or gyroscope. The strength of the internal magnet determines the rate that the muon precesses in an external magnetic field and is described by a number that physicists call the g-factor. This number can be calculated with ultra-high precision.

As the muons circulate in the Muon g-2 magnet, they also interact with a quantum foam of subatomic particles popping in and out of existence. Interactions with these short-lived particles affect the value of the g-factor, causing the muons’ precession to speed up or slow down very slightly. The Standard Model predicts this so-called anomalous magnetic moment extremely precisely. But if the quantum foam contains additional forces or particles not accounted for by the Standard Model, that would tweak the muon g-factor further.

“This quantity we measure reflects the interactions of the muon with everything else in the universe. But when the theorists calculate the same quantity, using all of the known forces and particles in the Standard Model, we don’t get the same answer,” said Renee Fatemi, a physicist at the University of Kentucky and the simulations manager for the Muon g-2 experiment. “This is strong evidence that the muon is sensitive to something that is not in our best theory.”

The predecessor experiment at DOE’s Brookhaven National Laboratory, which concluded in 2001, offered hints that the muon’s behavior disagreed with the Standard Model. The new measurement from the Muon g-2 experiment at Fermilab strongly agrees with the value found at Brookhaven and diverges from theory with the most precise measurement to date.

The accepted theoretical values for the muon are:

The new experimental world-average results announced by the Muon g-2 collaboration today are:

The combined results from Fermilab and Brookhaven show a difference with theory at a significance of 4.2 sigma, a little shy of the 5 sigma (or standard deviations) that scientists require to claim a discovery but still compelling evidence of new physics. The chance that the results are a statistical fluctuation is about 1 in 40,000. 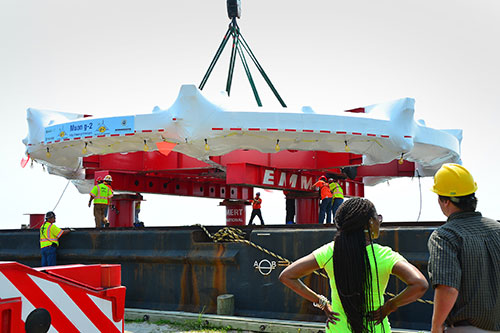 The Fermilab experiment reuses the main component from the Brookhaven experiment, a 50-foot-diameter superconducting magnetic storage ring. In 2013, it was transported 3,200 miles by land and sea from Long Island to the Chicago suburbs, where scientists could take advantage of Fermilab’s particle accelerator and produce the most intense beam of muons in the United States. Over the next four years, researchers assembled the experiment; tuned and calibrated an incredibly uniform magnetic field; developed new techniques, instrumentation, and simulations; and thoroughly tested the entire system.

The Muon g-2 experiment sends a beam of muons into the storage ring, where they circulate thousands of times at nearly the speed of light. Detectors lining the ring allow scientists to determine how fast the muons are precessing.

In its first year of operation, in 2018, the Fermilab experiment collected more data than all prior muon g-factor experiments combined. With more than 200 scientists from 35 institutions in seven countries, the Muon g-2 collaboration has now finished analyzing the motion of more than 8 billion muons from that first run. 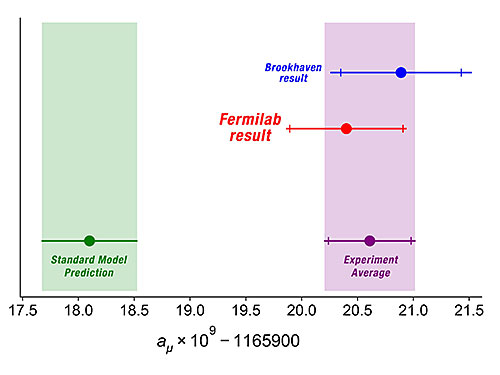 The first result from the Muon g-2 experiment at Fermilab confirms the result from the experiment performed at Brookhaven National Lab two decades ago. Together, the two results show strong evidence that muons diverge from the Standard Model prediction. (Image credit: Ryan Postel, Fermilab/Muon g-2 collaboration)

Data analysis on the second and third runs of the experiment is under way, the fourth run is ongoing, and a fifth run is planned. Combining the results from all five runs will give scientists an even more precise measurement of the muon’s wobble, revealing with greater certainty whether new physics is hiding within the quantum foam.

“So far we have analyzed less than 6% of the data that the experiment will eventually collect. Although these first results are telling us that there is an intriguing difference with the Standard Model, we will learn much more in the next couple of years,” Polly said.

“Pinning down the subtle behavior of muons is a remarkable achievement that will guide the search for physics beyond the Standard Model for years to come,” said Fermilab Deputy Director of Research Joe Lykken. “This is an exciting time for particle physics research, and Fermilab is at the forefront.”

Fermilab is America’s premier national laboratory for particle physics research. A U.S. Department of Energy Office of Science laboratory, Fermilab is located near Chicago, Illinois, and operated under contract by the Fermi Research Alliance LLC. Visit Fermilab’s website at http://www.fnal.gov and follow us on Twitter @Fermilab.

Brookhaven National Laboratory delivers discovery science and transformative technology to power and secure the nation’s future. Primarily supported by DOE’s Office of Science, Brookhaven Lab is a multidisciplinary laboratory with seven Nobel Prize-winning discoveries, 37 R&D 100 Awards, and more than 70 years of pioneering research. Brookhaven is managed for the Office of Science by Brookhaven Science Associates, a partnership between Stony Brook University and Battelle. For more information, visit http://www.bnl.gov.  Follow @BrookhavenLab on Twitter or find us on Facebook.

The DOE Office of Science is the single largest supporter of basic research in the physical sciences in the United States and is working to address some of the most pressing challenges of our time. For more information, visit http://science.energy.gov.