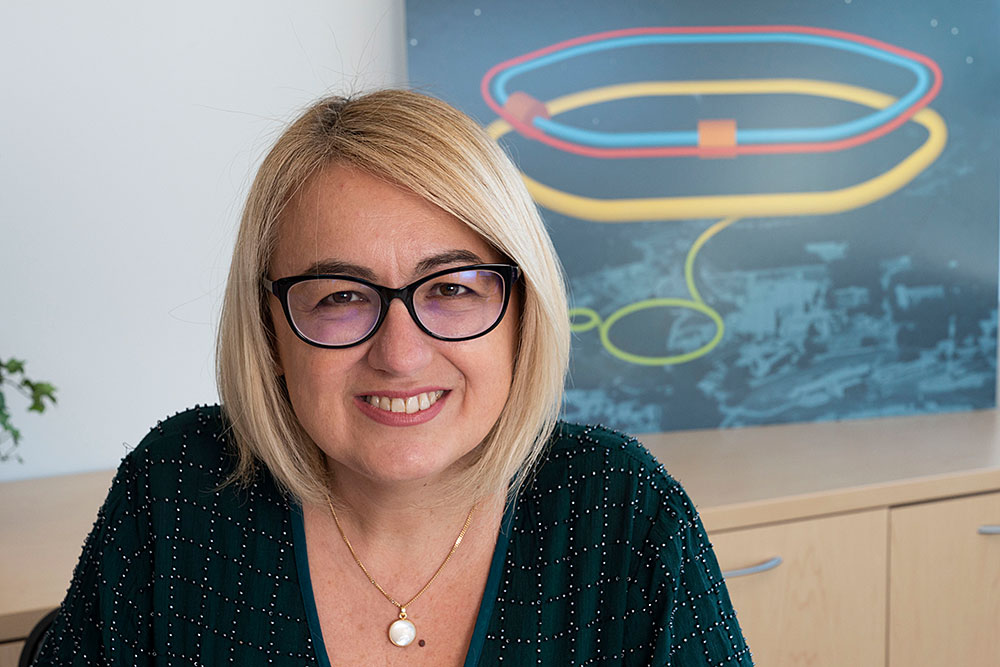 The EIC, a 2.4-miles-circumference particle collider, will be built at Brookhaven in partnership with DOE’s Thomas Jefferson National Accelerator Facility (Jefferson Lab). Researchers at the EIC will examine collisions of intense beams of polarized electrons with ions including polarized protons to answer essential questions about the makeup of matter and the strongest force in nature. The research and the technologies being developed to make it possible will also drive broader impacts on computing, human health, clean energy, and other national challenges.

The world-class facility will reuse components of the Relativistic Heavy-Ion Collider (RHIC), a DOE Office of Science user facility where scientists have produced an early universe form of matter known as quark-gluon plasma (QGP) and explored properties of QGP and nuclear matter since 2000.

“We are pleased to welcome Luisella, who brings extensive expertise in the management of accelerator projects to this key position at Brookhaven Lab,” said Jim Yeck, EIC Project Director. “Many thanks to Diane Hatton, who previously held this role, and Cathy Lavelle, who served as interim Project Manager during our search.”

Among her responsibilities, Lari will oversee day-to-day management of the design and construction of the EIC facility, serve as a critical point-of-contact for project partners, and help build a diverse and inclusive workforce in support of the project.

Lari brings to Brookhaven more than 20 years of experience as both a project leader and an accelerator physicist on major international projects. She served most recently as a senior manager and scientist at Fermi National Accelerator Laboratory, coordinating international partner contributions to the Proton Improvement Plan-II—an essential upgrade to Fermilab’s accelerator complex.

Before that, Lari was a project manager and scientist for the European Spallation Source (ESS), a powerful neutron source under construction in Sweden. She coordinated ESS Accelerator Project budgets and ran data-driven safety analyses. Previously, Lari served nearly 12 years as a planning officer and applied physicist at CERN, Europe’s particle physics laboratory, where she evaluated accelerator systems and managed plans for various upgrades at the Large Hadron Collider. Early in her career, as an assembly, integration, and verification engineer at an aerospace company, Lari tested internal fluid supply lines for one of the International Space Station pressurized modules that connects U.S., European, and Japanese laboratories in orbit.

“It's an honor to be part of the Electron-Ion Collider in the role of Project Manager—my dream job,” Lari said. “I’m thrilled to be part of the construction of a world-class accelerator facility that will be here for the next generation of scientists.”

“I fell in love with the possibility of becoming a project manager for complex accelerator projects 20 years ago and I have built my career in this direction,” Lari said. “I’m proud to show young scientists this is a path they can take.”

Lari earned a master’s degree in nuclear engineering from Politecnico di Torino University in Italy and a Ph.D. in physics from the Swiss Federal Institute of Technology in Lausanne. She holds a project management professional certification and is Six Sigma Green Belt certified. In 2018, Lari and team members from different national laboratories won DOE’s Project Leadership Institute Capstone Project Award for an outstanding case study analysis. Lari is a member of the Project Management Institute—a not-for-profit professional organization. She is also a member of the American Physical Society (APS) and is a scientific referee for APS journals.

RHIC and the EIC project are supported with funding from the DOE Office of Science (NP).