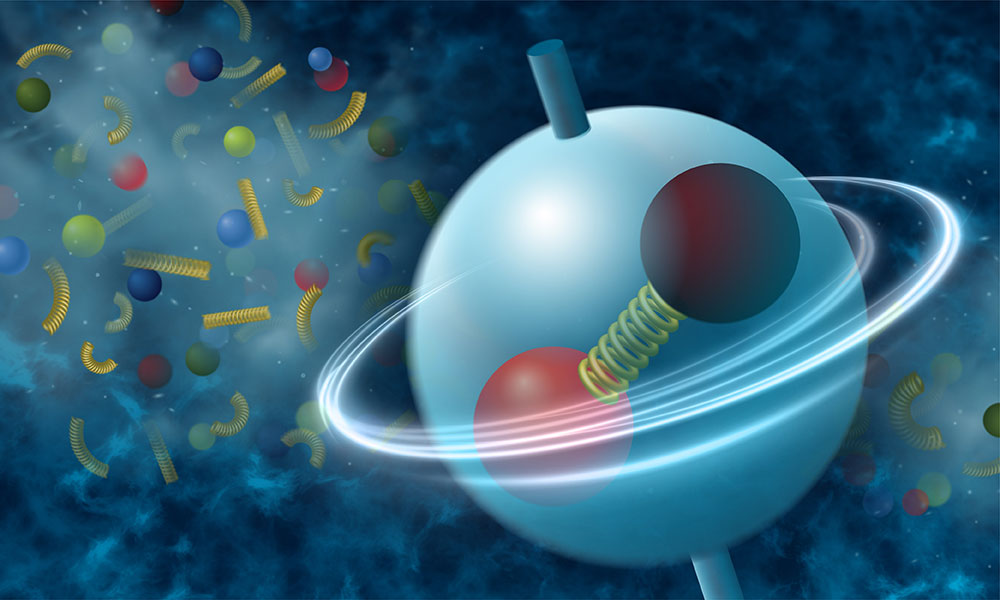 New data show that local fluctuations in the nuclear strong force may influence the spin orientation of particles called phi mesons (made of two quarks held together by the exchange of gluons).

UPTON, NY—Given the choice of three different “spin” orientations, certain particles emerging from collisions at the Relativistic Heavy Ion Collider (RHIC), an atom smasher at the U.S. Department of Energy’s (DOE) Brookhaven National Laboratory, appear to have a preference. As described in a paper just published in Nature by RHIC’s STAR collaboration, the results reveal a preference in global spin alignment of particles called phi mesons. Conventional mechanisms—such as the magnetic field strength or the swirliness of the matter generated in the particle collisions—cannot explain the data. But a new model that includes local fluctuations in the nuclear strong force can.

“It could be that the strong force fluctuations are the missing factor. Previously we hadn’t realized the strong force can influence particle spin in this way,” said Aihong Tang, a STAR physicist at Brookhaven who was involved in the analysis.

This explanation is still subject to debate and further verification is needed, the STAR physicists say. But if it proves to be true, “these measurements give us a way to gauge how large the local fluctuations in the strong force are. They provide a new avenue to study the strong force from a different perspective,” Tang said. 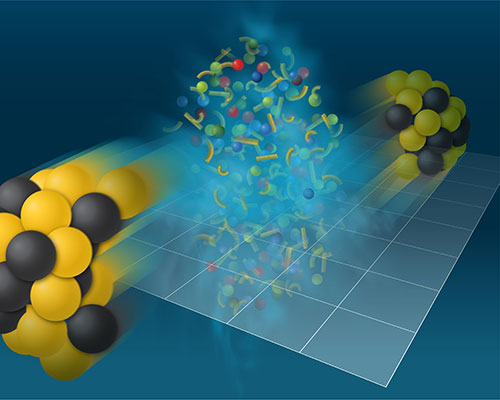 Collisions of heavy ions "melt" the boundaries of individual protons and neutrons, setting free the quarks and gluons normally confined within to create a quark-gluon plasma (QGP). Scientists look for spin alignment preferences among particles emerging from the QGP by tracking the distribution of their decay products relative to an imaginary line drawn perpendicular to the reaction plane of the colliding nuclei.

As its name implies, the strong force is the strongest of the four fundamental forces in nature. It’s what holds together the building blocks of atoms—the protons and neutrons that make up atomic nuclei, as well as their inner building blocks, quarks and gluons.

RHIC, a DOE Office of Science user facility for nuclear physics research, was built in large part so scientists can study this force. They do this by smashing together the nuclei of heavy atoms speeding around RHIC’s twin accelerator rings in opposite directions at nearly the speed of light. The head-on collisions “melt” the boundaries of individual protons and neutrons, setting free the quarks and gluons normally confined within to create a quark-gluon plasma (QGP). STAR takes snapshots and collects detailed data about particles emerging from these smashups so scientists can learn about how the quarks and gluons interact.

Earlier measurements from STAR revealed that when gold nuclei collide in a somewhat off-center way, the glancing impact sets the hot soup of quarks and gluons spinning. Scientists measured the “vorticity” of the swirling quark-gluon plasma by tracking its influence on the spins of certain particles emerging from the collisions.

You can think of spin as similar to the rotation of a planet like Earth, with north and south poles. For the particles in this earlier study (lambda hyperons), the degree to which their spin axes align with the angular momentum generated in each off-center collision is a direct proxy for measuring the QGP’s swirliness. 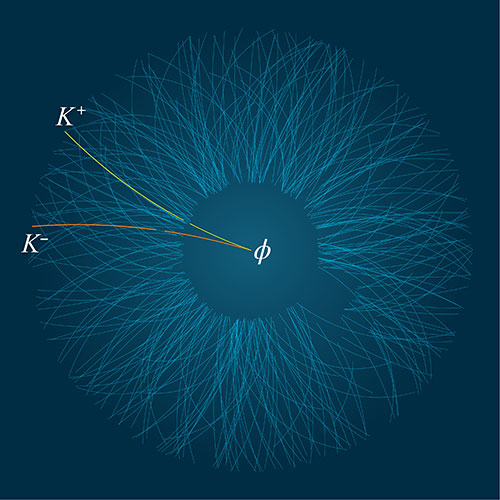 Tracking pairs of positively and negatively charged kaons (K+, K-)—the decay products of phi mesons (Φ)—revealed that these mesons appear to have a preference for one among three possible spin states. A new theoretical model suggests that local fluctuations in the strong nuclear force may explain this preference.

More recent STAR analyses sought to measure the spin alignment of different types of particles, including the phi and the K*0 mesons reported on in the current Nature paper. For these particles, there are not just two directional orientations for spin (“north” and “south”), but three possible orientations.

As in the previous study, the STAR physicists measured the spin alignment of these particles by tracking the distribution of their decay products relative to the direction perpendicular to the reaction plane of the colliding nuclei. For the phi and K*0 mesons, the scientists translate those measurements into a probability that the parent particle was in one of the three spin states.

“If the probability of each of these three states equals one-third, then that means there’s no preference for the particle to be in any one of these three spin alignment states,” explained STAR physicist Xu Sun, a former postdoctoral fellow at the University of Illinois at Chicago, who recently joined the Institute of Modern Physics, China, as a staff scientist.

That’s essentially what the scientists found for the K*0 particles—no preference. But for the phi mesons, there was a strong signal that one state was preferred over the other two.

“Somehow nature decided the phi mesons have a preference in choosing one of those states,” Sun said.

Chensheng Zhou—who has worked with Tang on these measurements since 2016, starting when he was a graduate student at Fudan University in China—presented the preliminary findings at a conference at Stony Brook University in 2017. That presentation sparked theorists to make various attempts to explain the findings with conventional mechanisms—including vorticity, the magnetic field, fragmentation, and others. Curiosity continued to grow when STAR collaborator Subhash Singha of the Institute of Modern Physics discussed the result at conferences in 2019 (when he was a postdoc at Kent State University) and 2022.

Meanwhile, the STAR physicists checked their analyses, performed new analyses, and reduced the uncertainty of their results.

“Our results stood up to this scrutiny, and still the numbers do not add up,” Tang said.  Describing the global spin alignment of the phi meson using only the conventional mechanisms would result in a value lower than what the scientists measured at STAR.

Theorists recently came up with the idea that local fluctuations in the strong force within the quark-gluon plasma could be driving the phi mesons’ apparent spin alignment preference. Understanding the different quark components of the phi and K*0 mesons might help to explain how this happens—and provide a way to conduct further tests.

"Even after 22+ years of operation, RHIC continues to sharpen our understanding of nature by surprising us with new discoveries."

Xin-Nian Wang, a theorist at DOE’s Lawrence Berkeley National Laboratory, explained that each phi meson is made of a quark and antiquark of the same “flavor” family (strange and anti-strange). Strong-force effects tend to add up and influence these same-flavor particles in the same direction.

K*0 mesons, on the other hand, are made quark-antiquark pairs of different flavors (down and anti-strange). “With this mixture of flavors, the strong force is pointing in different directions, so its influence wouldn’t show up as much as it does in the phi meson,” Wang said.

To test this idea, the STAR physicists plan to study the global spin alignment of another meson made of same-flavor-family quarks—the J/psi particle (made of charm and anti-charm quarks).

“Even after 22+ years of operation, RHIC continues to sharpen our understanding of nature by surprising us with new discoveries,” Tang said.

This research was funded by the DOE Office of Science (NP), the U.S. National Science Foundation, and a range of international organizations and agencies listed in the scientific paper. The STAR team used computing resources at the Scientific Data and Computing Center at Brookhaven Lab, the National Energy Research Scientific Computing Center (NERSC) at DOE’s Lawrence Berkeley National Laboratory, and the Open Science Grid consortium.