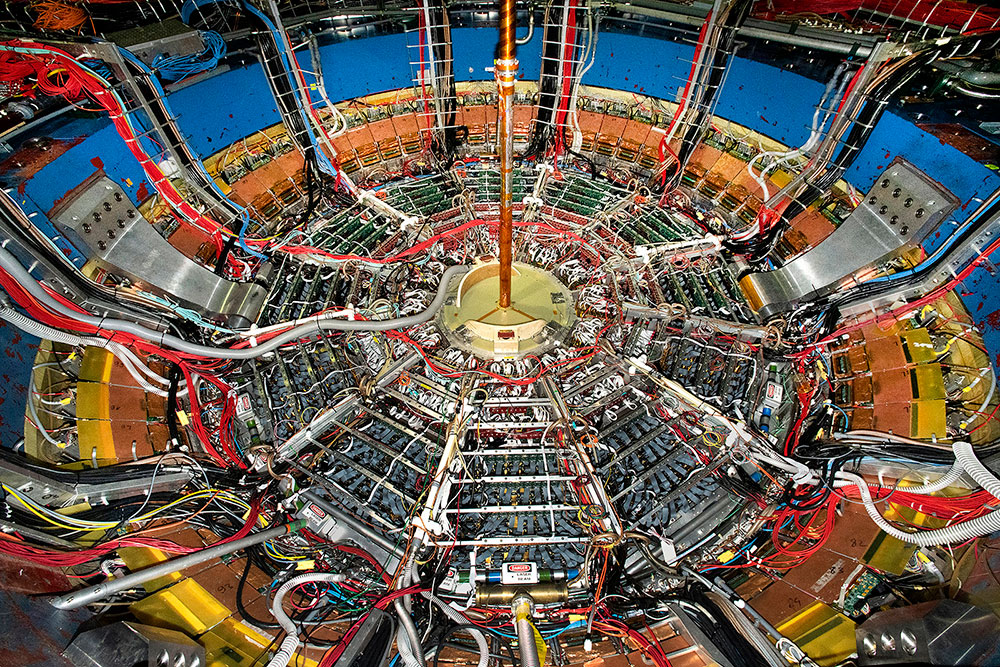 A comprehensive analysis of data from the STAR detector at the Relativistic Heavy Ion Collider (RHIC), above, reveals that conditions created just as heavy ions collide in the center of the detector have the biggest influence on the asymmetric flow of particles from these collisions. The results will help scientists zero in on key properties of a unique form of matter that mimics the early universe.

UPTON, NY—Scientists in the STAR collaboration at the Relativistic Heavy Ion Collider (RHIC)—an atom smasher at the U.S. Department of Energy’s Brookhaven National Laboratory—have published a comprehensive analysis aimed at determining which factors most influence fluctuations in the flow of particles from heavy ion collisions. The results, published in Physical Review Letters, will help the scientists zero in on key properties of a unique form of matter that mimics the early universe.

The matter these physicists are interested in is called a quark-gluon plasma (QGP)—a trillion-degree soup of quarks and gluons. These are the most fundamental building blocks of all visible matter, the components that make up the protons and neutrons of atomic nuclei. RHIC creates this hot quark soup by colliding beams of large nuclei (a.k.a. heavy ions). The collisions melt the boundaries of individual protons and neutrons so scientists can study the quarks and gluons as they existed nearly 14 billion years ago, before those familiar nuclear particles formed.

“Having a facility that can vary the beam energy and collide different kinds of ions allows us to change the temperature and the density of the hot blob of quark matter, along with its size,” said Niseem Magdy, a postdoctoral fellow at the University of Illinois at Chicago who is one of the leaders of the new analysis. “Studying what happens under those different conditions can tell us more about the properties of the matter we’ve created: how viscous and how flowing it is and how it transforms from one phase to another—from regular nuclei to quark-gluon plasma.”

Go with the flow

For this analysis, the scientists were particularly interested in the asymmetric flow of debris from particle smashups at RHIC. Nuclear physicists have observed from RHIC’s earliest days that off-center collisions preferentially push more particles out along the reaction plane of the colliding nuclei than perpendicular to it. These elliptic flow patterns were important to the discovery that the QGP behaves as liquid with remarkably low viscosity, rather than a uniformly expanding gas.

But the flow is not quite as smooth as that simplistic picture suggests. There are lots of fluctuations. Nailing down the source or sources of those fluctuations will allow the scientists to calculate the plasma’s properties, including its viscosity, much more precisely.

“The fluctuations could come from the initial state, when the ions first collide, or they could develop while QGP is evolving, or they could develop when the system produces the particles we track in our detector,” said Roy Lacey, a professor in the Chemistry and Physics departments at Stony Brook University who served as Magdy’s Ph.D. thesis advisor and guided his work. “When you carefully choose the measurements so as to emphasize different aspects of that timeline you can learn where the fluctuations come from.”

Collisions of gold ions melt protons and neutrons to set free their component particles, quarks and gluons. A new analysis reveals that the conditions set up in the earliest stage of these collisions play the greatest role in causing the asymmetric flow of particles from these collisions, with more particles emerging along the reaction plane than perpendicular to it.

To tease these contributions apart, the scientists studied flow patterns from a wide range of collisions conducted over many years of RHIC operations.

They analyzed flow data from collisions of different sizes and types of nuclei/ions (gold-gold, uranium-uranium, and copper-gold), and included how central or off-center the ions struck one another. This exercise can help the scientists see the influence of initial state effects—the size and shape of the QGP blob created by the overlapping ions.

They also looked at flow patterns in collisions of the same ion system (gold-gold) over a wide range of collision energies. Because higher energy collisions generate stronger pressure gradients than low energy ones, seeing a difference in flow patterns by energy would reveal that the fluctuations emerge as the blob of hot matter evolves.

And they tracked the flow patterns of different species of particles striking the detector from collisions at the same energy and of the same ion type. Seeing differences in this data would indicate that fluctuations emerge as the QGP transitions back into composite particles (hadrons) made of quarks bound together by gluons.

The results showed that flow fluctuations are most dependent on the conditions created at the initial state of the collision.

The strongest influence: how central the collisions are. Off-center collisions create an oblong, football-shaped overlap region, where the pressure gradient is stronger along the short axis of the football than along the long axis. This asymmetric pressure gradient pushes more particles out along the reaction plane than perpendicular to it, as previously observed. But importantly, the new analysis accounts for the “lumpiness” of the collision zone.

“There are a bunch of small balls [individual protons and neutrons] hitting each other randomly,” Magdy said. “Overall, it looks like an ellipse shape, but there is fluctuation around the edges.”

As a result, Lacey explained, “the density distribution of the matter created is a bit lumpy and that lumpiness influences fluctuations in the flow of particles that ultimately emerge.”

In contrast, the analyses showed flow patterns that did not vary significantly with collision energy or among the different particle species produced by hadronization.

“This is the first time that we’ve been able to take all this data collected at RHIC—from the beam energy scan and from collisions of different systems—and combine them together to identify the dependence of these fluctuations,” Magdy said.

Now that the scientists know the initial state conditions are primarily responsible for the flow fluctuations, they’ll be able to reduce a key longstanding uncertainty and make more precise calculations of the quark-gluon plasma’s properties.

“We are now able to put much, much better constraints on the magnitude of these properties, like bulk viscosity, shear viscosity, and so on,” Lacey said.

That precision will help them chart out more precisely how quark matter changes under different conditions of temperature and pressure—a process that’s similar to mapping out the phases of any type of matter such as water.

“The more precise measurements will help tremendously in trying to narrow down whether or not there are phase transitions in nuclear matter and under what conditions,” Lacey said.

Putting tighter constraints on measurements of viscosity, in particular, may also help scientists discover whether there is a so-called critical point in the nuclear phase diagram. That’s a point where the type of phase change from ordinary nuclear matter to QGP itself changes from a “first-order” transition between two distinct states to a second-order transition. Beyond this point, a smooth crossover transition occurs where both hadrons and QGP can coexist. Precision measurements of viscosity will allow the physicists to look for a dip in shear viscosity that’s expected to occur at this point on the map of nuclear phases.

“The measurements now reported do not give that exact information yet, but we will use these new fluctuation constraints combined with model comparisons to move in that direction,” Lacey said.

As Magdy explained it, “This new analysis is challenging the models to provide an explanation that will accommodate this comprehensive set of data so we can gain a better understanding of the properties and evolution of the quark-gluon plasma.”

This research was funded by the DOE Office of Science (NP), the U.S. National Science Foundation, and a range of international organizations and agencies listed in the scientific paper. The STAR team used computing resources at the Scientific Data and Computing Center at Brookhaven Lab, the National Energy Research Scientific Computing Center (NERSC) at DOE’s Lawrence Berkeley National Laboratory, and the Open Science Grid consortium.