Brains and brawn can co-exist. Just ask BNLers Travis Shrey, Gene Van Buren, Jeff Mitchell, and Art Sedlacek, who, in addition to their scientific skills, are known for their moves on the volleyball court. 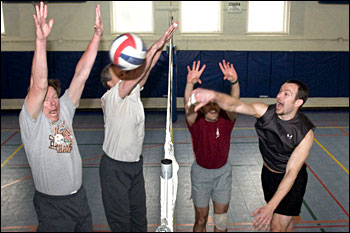 All four men "dig" science because they like discovering how the world works, but they each have different ideas of how physics applies to volleyball.

For example, when Shrey coaches others, he occasionally uses physics fundamentals to improve a person's playing level.

"When someone jumps to spike a ball, the highest point of the arc they create should be at the ball, not behind it," Shrey said. He also considers the science as applied to hitting the ball, which involves torque through the hip, shoulder, and arm to the hand.

For Van Buren, however, the physics of the game remains in the back of his head.

"It's more subconscious when I play," he said.

As much as one might want to jokingly assume that scientists think about every aspect of life in scientific terms, there are many like Mitchell, who said, "If I thought about volleyball's physics, I wouldn't be able to play the game."

"You can't teach this," Shrey said. "It's experience. The longer you play the game, the more it slows down. Your anticipation gets better."

Mitchell said he started playing volleyball in college to meet girls. In fact, that is how Van Buren met his wife. Now, the sport serves as a good way for them to exercise and stay in shape.

"Volleyball is ageless," Mitchell said. "I plan to play until I'm 70 years old."

Shrey also played competitive volleyball in college, while Sedlacek began playing when he joined the Lab.

These physical physics guys also enjoy other sports, ranging from surfing and skiing to ultimate frisbee and cycling.

"I find cycling along with volleyball to be very therapeutic," Sedlacek said. "As scientists, we'll bang our heads against the wall to solve a problem. After cycling, when your mind and body are drained and your lungs hurt too much to think, you can come back to the problem and see things in a different light."

When they are off the court, Van Buren works on the STAR experiment at Relativistic Heavy Ion Collider (RHIC) while Shrey serves as a Collider-Accelerator Department Operations Coordinator for RHIC. Mitchell analyzes PHENIX collisions, looking for chemical signs of quark gluon plasma, an elusive form of hot dense matter with a fleeting lifetime.

When Sedlacek, of the Atmospheric Sciences Division, is not too busy keeping a ball in the air, he spends some time in the air himself on research aircraft to help understand the role of aerosols in climate change. Last fall, he and several colleagues spent six weeks investigating cloud microphysics off the coast of Arica, Chile.

For these brainy ballplayers, volleyball isn't only about the game itself.

"When the gym was flooded three years ago, we were devastated," Sedlacek said. "It was more than just taking away the game itself; the social aspect was gone."