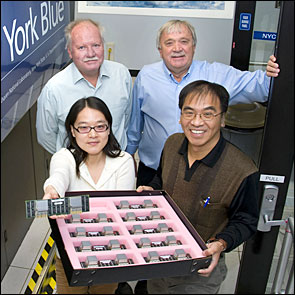 Scientists at the U.S. Department of Energy's Brookhaven National Laboratory have published research focused on the formation of clouds, comparing computer simulations to aircraft observations. This research paper, the first climate-science paper to be published on research using the supercomputer New York Blue, can be found in the December 22, 2008 aerosol-precipitation issue of Environmental Research Letters.

New York Blue, located at Brookhaven, is used by the Laboratory and Stony Brook University in a cooperative effort, the New York Center for Computational Sciences.

"Clouds are one of the most turbulent environments you can find in nature," said Yangang Liu, a Brookhaven cloud physicist and the project's principal investigator. "There are many things we don't know about clouds."

Clouds play critical roles in many climate processes, including the Earth's energy and water cycles. They are an essential part of the global climate system yet are considered one of the largest uncertainties for future climate projection.

Research on clouds presents some major challenges, given that cloud processes span a huge range of scales, from hundredths of an inch to hundreds of miles, and over these distances and time, are highly variable. This multiscale variability makes it difficult to simulate clouds and represent them in climate models. Smaller scales cannot demonstrate cloud systems, while larger scales lose resolution of individual clouds. 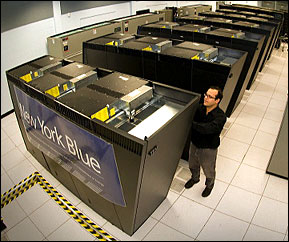 In order to numerically represent a cloud, researchers must consider turbulence in addition to factors such as tiny aerosol particles suspended in the air. As a result, the three-dimensional cloud simulation demands an enormous amount of computer resources.

That is where New York Blue comes in. About 10,000 times faster than a personal computer, it uses more than 36,000 processors to handle over 100 trillion calculations per second. This capacity allows it to efficiently handle such a large and complex 3D model.

To improve global climate modeling, Liu's research team used New York Blue to simulate the development of a cloud deck found over western coastal waters over time and space with a 3D model. Characteristics of the model's cloud were compared with actual cloud observations made by aircraft.

"The model is accurate for central areas of the cloud, but not for the cloud base or top," said Brookhaven's Huan Guo, the lead author. "What makes it especially difficult is that the bottom surface is smooth, but the top surface is like a cauliflower."

The cloud model best matches the actual cloud as the model's grid size becomes finer, down to an area of about 30 square feet. Nevertheless, even the highest resolution simulations still fail to account for frequent and large variations, typical of turbulence. This finding has crucial implications for model improvement and cloud representation in climate models.

This work, under Brookhaven's Climate Science Initiative, was funded by the Department of Energy's Atmospheric Radiation Measurement and Atmospheric Sciences Programs, Office of Science, and NASA.