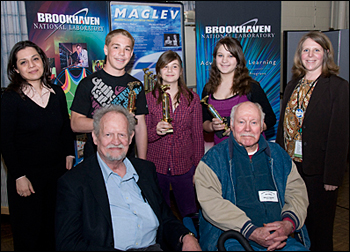 UPTON, NY — Center Moriches Middle School students were the champions of the annual Maglev Contest held on April 1 at the U.S. Department of Energy's Brookhaven National Laboratory, earning six out of a total of 21 prizes. Longwood Junior High students were the second-place winners with three prizes.

Brookhaven Lab scientists Gordon Danby and James Powell, now retired, invented Maglev — the suspension, guidance and propulsion of vehicles by magnetic forces — and patented it in 1986. As honored guests at the contest, Danby and Powell were happy to be in the midst of the students' enthusiasm.

"I envy you because you are at the beginning of this transport system," Powell said. "Our goal is to have a transcontinental railroad in May 2019. Twenty years from now, you'll even be able to travel in space for just a few thousand dollars, since Maglev allows people and things to be launched cheaply into space."

One hundred eighty students from 12 Long Island middle schools entered the contest, in which they were required to design and construct model Maglev vehicles according to engineering specifications in their choice of six categories: electrified track, wind power, gravity, self-propelled, futuristic, and scale-model design. Judging was based on speed, efficiency, the appearance of the vehicles, and the students' written design process.