This year, 122 BNLers "swam" along the gulf coast for three months without encountering a single shark. As part of the third annual "Virtual Swim," the swimmers collectively lapped more than 1,800 miles to cover the distance between Islamorada, Florida to San Fernando, Mexico. Pete Heotis, of the Radiological Controls Division, was the lead organizer of the three-month event. After the previous successful virtual swims around Long Island and to the Bahamas, this year's challenge saw the most participants, including 13 retirees and 35 women. 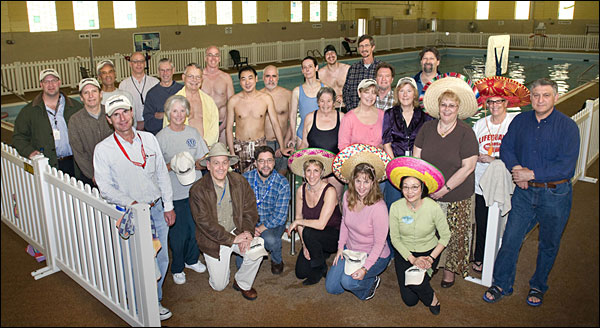 BNL swimmers "virtually" braved the distance from Florida to Mexico along the Gulf Coast.

Heotis said that swimmers' New Year's resolutions to exercise more synchronize well with the January start of the virtual swim. Swimming one mile, or 53 pool lengths, in one hour burns approximately 380 calories.

The top three swimmers with the most mileage included Robert Todd, with 80 miles, and Heotis and Kathy Hershcovitch, both with 73 miles. "I gave up running four years ago because it was too hard on my body, so I took up swimming," said Todd, who does daily laps at lunch. "This event incorporated a team element into swimming, which is usually an individual sport. It built team spirit, which was nice." The team tracked their miles with a wall map made by Scott Smith of the Meteorology department, and lifeguard Ian Ballantyne converted the swimmers' laps to total mileage.

At the end of March, 30 participants celebrated at a local Mexican restaurant with dinner and dancing, organized by lifeguard Denise Jennings. "We had a great swim this third year, and we are discussing continuing from Mexico towards the Panama Canal," Heotis said. "After that, maybe we will head up the west coast and through the northwest passage." For the BNL Swim Club, Heotis said, "BERA has been a big support, giving the lifeguards' time for this event and providing the celebration at the end."

For more information on the club, contact Heotis, Ext 7461 or pheotis@bnl.gov.