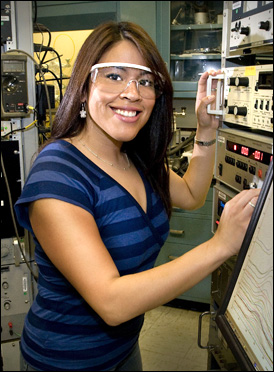 Melissa Patterson, a doctoral student mentored by Michael White, Chemistry Department, has been named a recipient of Stony Brook University's (SBU) Presidential Award to Distinguished Doctoral Students. The award for excellence in research is given to five students each year. She will receive the award, which consists of a citation and $500, on May 20, two days before her graduation ceremony.

Patterson was cited for "improving our understanding of chemical reactions on nano-structured catalysts for energy applications."

Patterson and her BNL colleagues created model nanocatalysts of molybdenum sulfide, the first step in developing the next generation of materials to be used in hydrosulfurization (HDS), a process that removes sulfur, a pollutant, from natural gas and petroleum products.

"In our laboratory, we are using the tools of nanoscience to modify the activity of molybdenum sulfide nanoparticles by tuning their size, structure and chemical composition," Patterson said. "We have identified one particular structure that is most reactive as a model HDS catalyst, since it readily absorbs sulfur and releases carbon monoxide."

After earning a B.S. in chemistry from SUNY Binghamton in May 2003, Patterson enrolled in SBU's doctoral program in chemistry in 2004. Since that time, she has been a research assistant for White, who is also on the faculty of SBU. All of her doctoral research has been done at BNL.

"When I visited Brookhaven Lab, I knew it would be a good opportunity to work here," Patterson said. "I've been able to collaborate with many scientists in the Chemistry Department as well as other departments, which has enriched my research experience. After I graduate, I plan on looking for a postdoctoral position in research."

Patterson also won an Undergraduate Research Award for Excellence in Research, 2001-2003, from SUNY Binghamton, and she was a W. Burghardt Turner Fellow at SBU, 2006-2008. In addition, she won first place in oral presentation at the Preparing for the Professoriate Conference in Albany, New York in 2008.

Besides working on her doctorate, Patterson has been involved in university service. She was Senator for the Chemistry Department in the Graduate Student Organization, 2005-2008, serving as a representative for chemistry graduate students. She also is a member of the Alliances for Graduate Education and the Professoriate, a network of universities dedicated to increasing the number of underrepresented minorities obtaining graduate degrees in science, technology, engineering and mathematics.

Patterson has coauthored six scientific papers during her time at BNL and has given four oral presentations and presented four posters at scientific meetings.