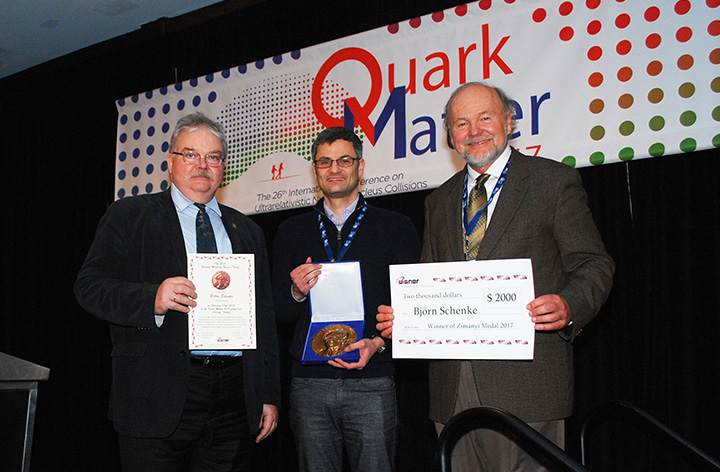 Bjoern Schenke, a theoretical physicist at the U.S. Department of Energy’s (DOE) Brookhaven National Laboratory, has been awarded the 2017 Zimányi Medal in Nuclear Theory. The medal commemorates Hungarian physicist József Zimányi and is granted to highly accomplished theorists under the age of 40 for outstanding work in high energy nuclear physics. Brookhaven’s Peter Petreczky won the award in 2012, making Schenke the lab’s second scientist to receive the medal since it was established in 2011.

The selection committee presented Schenke with his medal at the Quark Matter 2017 conference in Chicago, where he presented an invited plenary talk. Physicists from around the globe gathered at the conference to discuss the unique matter created in collisions of atomic nuclei—how it behaves and what it tells us about the beginning of our universe.

Schenke is a researcher in the Nuclear Theory group at Brookhaven, where he explores the theory that describes the hot, dense mixture of quark and gluon particles created in collisions at Brookhaven’s Relativistic Heavy Ion Collider (RHIC), a DOE Office of Science User Facility, and the Large Hadron Collider at Europe’s CERN laboratory.

The award recognizes Schenke’s work modeling what goes on in these collisions. He uses principles from quantum chromodynamics—the theory of how quarks and gluons interact—as well as hydrodynamics to simulate the directions and patterns in which quarks and gluons emerge after beams of ions collide. The simulations successfully match up with what is observed in these experiments, meaning his mathematical models provide a solid basis for further investigations of the unusual behaviors of these elementary building blocks of nuclei.

"I am very honored to receive the 2017 Zimányi Medal and appreciate this recognition of my work on theoretical heavy ion physics,” said Schenke. “We work in an exciting and complex field of physics and I look forward to further contributing to our understanding of the fundamental properties of matter using high energy nuclear collisions."

Schenke earned his Ph.D. in 2008 at Goethe University in Frankfurt, Germany. After conducting postdoctoral research as part of a fellowship at McGill University, he joined Brookhaven Lab as a Research Associate in 2010, became a Goldhaber Distinguished Fellow in 2012, and became an associate physicist in 2014. He received a Young Scientist Award from the International Union of Pure and Applied Physics in 2013, and was selected by the DOE for an Early Career Award Program grant in 2014.

Schenke’s work is supported by the DOE Office of Science (NP).