When heavy ions (the nuclei of heavy atoms such as gold and lead) collide at high energies at Brookhaven National Laboratory's Relativistic Heavy Ion Collider (RHIC) and Europe's Large Hadron Collider (LHC), the components of the nuclei (protons and neutrons) melt to form a hot soup of their constituent particles, quarks and gluons. A new model that accurately describes the experimentally observed patterns of particles flowing out from this "quark-gluon plasma" (QGP) suggests that the effective shear viscosity, or resistance to flow, is close to the ideal limit used to define a "perfect" fluid. 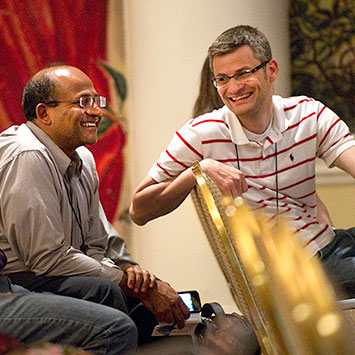 "Our result is consistent across finer and finer detailed analyses of particle flow patterns," said Bjoern Schenke, a Goldhaber Fellow in the nuclear theory group at Brookhaven Lab and a coauthor on a paper describing the analyses in Physical Review Letters published earlier this year.

"These findings help answer the question of how 'perfect' the perfect liquid QGP created at RHIC is—that is, how close the viscosity comes to a limit derived from quantum mechanics—and how this property varies with temperature. Our findings indicate that viscosity increases away from the ideal limit with the increasing temperatures reached at LHC," Schenke said.

The findings will also help scientists better understand how the internal characteristics of the heavy ions before they collide—particularly dense concentrations of gluons known as color glass condensate—shape the initial collision geometry and rapidly turn into the liquid quark-gluon plasma.

Schenke and his collaborators arrived at these conclusions by systematically studying the directional-dependence of particles flowing out of collisions of heavy ions at both RHIC and the LHC and applying a model and other methods to identify the viscosity that best fit the experimental data at finer and finer levels of detail.

A visual model of how particles emerging from heavy ion collisions flow from the point of impact depending on the viscosity of the matter produced. At low viscosity (left) the pattern of particles retains more of the detailed characteristics of the initial collision conditions than at high viscosity (right), where the details are blurred.

"Particle flow patterns are strongly linked to the initial 'geometry' of the colliding ions," Schenke explained. "This includes the large-scale elliptic shape of the overlap region of two spherical ions colliding not quite head on, as well as more subtle fluctuations of color glass condensate on scales smaller than the individual protons and neutrons that make up each ion."

The distribution of particles emerging from the collision—for example the number emerging horizontally vs. vertically transverse to the direction of the colliding beams—retains echoes of these initial geometries. The lower the viscosity (actually the ratio of shear viscosity to entropy density), the greater the retention of these initial-state characteristics.

These findings help answer the question of how 'perfect' the perfect liquid QGP created at RHIC is.

"This suggests that heavy-ion collisions at RHIC produce a perfect fluid that is initially closer to the ideal hydrodynamic limit, a theoretical scenario in which the viscosity is zero," Schenke said.

This result is in line with theoretical expectations that the ratio of shear viscosity to entropy density increases with increasing temperature, because LHC's collisions occur at higher energy and create higher initial temperatures than RHIC's.

"Higher viscosity dampens the flow of particles at large scales, and even more so at finer scales, resulting in less retention of the initial shape in particles flowing from collisions at LHC," Schenke said.

Understanding details of the temperature dependence of the viscosity will help scientists map the "transport properties" of the quark-gluon plasma created in these collisions, including how strongly interacting the particles are and how "perfect" the liquid is, and possibly explore the point at which a gas made of protons and neutrons melts to form QGP, expected to occur when the viscosity is at its lowest level.

This research was conducted in collaboration with Charles Gale and Sangyong Jeon of McGill University, Prithwish Tribedy of the Variable Energy Cyclotron Centre in India, and Raju Venugopalan of Brookhaven Lab. Brookhaven Lab's role in the work was funded by the U.S. Department of Energy's Office of Science (Nuclear Physics), Brookhaven's Laboratory Directed Research and Development program, and a Goldhaber Distinguished Fellowship from Brookhaven Science Associates. The Canadian researchers were supported by the Natural Sciences and Engineering Research Council of Canada.