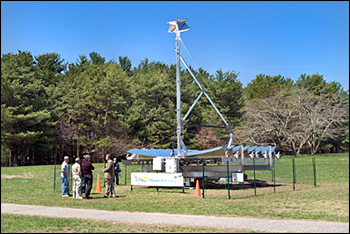 Members of the Environmental Protection Division held an Environmental Vendor Fair at Berkner Hall on April 22 as part of their Earth Week celebrations. At the event, New Age Energy displayed a Tri-Generation solar power system that emits electricity, heat, and light simultaneously. Located between Berkner and the parking lot, the 7,000-pound, sun-tracking, 20-by-20 foot structure attracted much attention from the Lab community.

The structure is designed to rest on the ground, on flat rooftops, or create a parking structure for cars underneath. Its solar panels use computer chips to increase their efficiency to 35 percent, much higher than the eight percent efficiency of others available. This relatively small unit can power an entire house, generating 32 kilowatts of electricity and 42 kilowatts of heat.

"Can I get one in my backyard?" you may ask. For an out-of-pocket cost of $40,000 - not including possible tax breaks or discounts - you receive a four-unit power system that makes up for its cost in four to five years, effectively supplying more than the power your house needs and giving over half of what it creates and stores to the power grid.

This system also has a unique air-conditioning process, Long Island Green Power Associates President Jeffrey DiLandro said. To reduce energy usage in a building, the heat produced from the system removes humidity from the air without the use of refrigerant or a compressor. The air becomes purified by traveling through a salt solution, which picks up bacteria and pollen.

"If we replaced, for example, all the landfills on Long Island with these, we could provide 40 percent of Long Island's power," New Age Energy CEO Michael Betsch said. "We expect the efficiency of these solar cells to be developed to 50 percent by 2015." 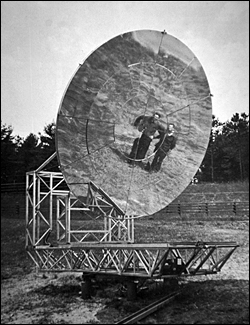 A solar heliostat, or energy concentrator

This is not the first time that solar powered energy systems have been at Brookhaven.

The purpose of this heliostat was to generate steam energy to compete with fuel oil prices during the 1973 energy crisis. Shaped like a dome and composed of 28 lightweight mirrors, the heliostat tracked the sun and could shut down and fold itself up in inclement weather.

The system never made it to commercial production when gas prices dropped and funding consequently declined. These days, solar power units appear to be of similar size as their predecessors.