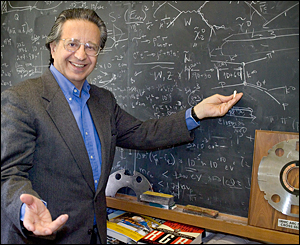 The 450th Brookhaven Lecture, to be held today, Wednesday, May 6, will be given by BNL Distinguished Senior Physicist Nicholas Samios, director of the RIKEN BNL Research Center and former Lab Director. Samios will discuss "Personal Reflections on the Interaction of Science and Government and Possible Lessons for the Present Crisis" at 4 p.m. in Berkner Hall.

All are welcome to this free lecture, which is open to the public. The talk will also be webcast on WBNL. Refreshments will be offered before and after the talk. Visitors to the Lab of 16 and over must carry a photo ID.

As many members of his prospective audience know, Samios's distinguished achievements in science and administration qualify him more than most to take on this topic. Having received his B.A. and Ph.D. degrees in physics from Columbia University in 1953 and 1957, respectively, he joined the Lab in 1959. In addition to his work in experimental physics, he served as Physics Department Chair from 1975 to 81 and Deputy Director for High-Energy & Nuclear Physics from 1981 to 82.

As a researcher, Samios made many of the particle discoveries that have helped define and lead to the acceptance of the "Standard Model" of particle physics, the accepted theory that explains known particle interactions. In particular, he is noted for the discovery of the phi meson and the omega minus hyperon, crucial elements delineating the symmetry of hadrons, which ultimately led to the quark model of elementary particles, a pillar of the Standard Model.

Samios also made significant contributions through a decade-long study of neutrino interactions, both at BNL and Fermi National Accelerator Laboratory. These studies included the discovery of the charmed lambda - the first charmed baryon observed - and early measurements of neutrino electron elastic scattering and limits on neutrino oscillations.

As BNL Director from 1982 to 97, Samios led the effort to build the Relativistic Heavy Ion Collider (RHIC), the world's highest energy facility for nuclear physics, which began operating in 2000. A Distinguished Senior Scientist since 1997, he became Deputy Director of the RIKEN/ BNL Research Center (RBRC) in 1998, and Director in 2003. RBRC is a research center at BNL funded primarily by the Japanese RIKEN Laboratory to explore both the theoretical and experimental physics potential of RHIC. Samios also held the position of adjunct professor in the Physics Department at Columbia University from 1970 to 1995.

Samios' many honors include the 1980 E.O. Lawrence Memorial Award, the 1980 New York Academy of Sciences Award in Physical & Mathematical Sciences, the 1993 W.K.H. Panofsky Prize, and the 2001 Bruno Pontecorvo Prize of the Joint Institute for Nuclear Research in Dubna, Russia. He was elected to the National Academy of Sciences in 1982 and is a Fellow of the American Physical Society, the American Academy of Arts and Sciences, and the Akademia Athenon. He is also widely recognized as an outstanding speaker.