During its second year of user operations, NSLS-II reached significant milestones and added several beamlines that offer researchers exciting new capabilities across all fields of science. On July 17, the facility recorded 168 hours (seven days) of continuous beam, showcasing its stability and reliability. And on July 20, NSLS-II delivered user beam at 325 milliamps (mA) for the first time, creating the brightest light the facility has seen so far. Because NSLS-II is in its early years of operations, its level of brightness is still increasing; the goal is to reach 350 mA by the end of September.

Reaching another milestone, NSLS-II named Joanna Krueger its 1000th lifetime user on June 28. A chemistry professor at the University of North Carolina at Charlotte, Krueger uses NSLS-II to study “sleeping beauty” transposase, an inactive enzyme found in fish that becomes active when inserted into human cells.

“I am impressed by all the improvements: automation for data collection and fast data reduction,” Krueger said. “I have never seen my data reduced so fast—and I have been doing this work since the mid-nineties. I am very pleased with the facility and the assistance from the beamline staff. It is amazing.”

The great number and diversity of researchers using NSLS-II is a huge success, especially considering the still-growing facility is operating at less than half its capacity. There are currently 20 beamlines (experimental stations) in operation but, when completed, NSLS-II will have 60 beamlines. In other words, at least 60 different experiments could occur at the same time.

Eight new beamlines were added to NSLS-II during its second year, expanding the facility’s reach into new fields of research and allowing scientists to conduct experiments using new techniques. 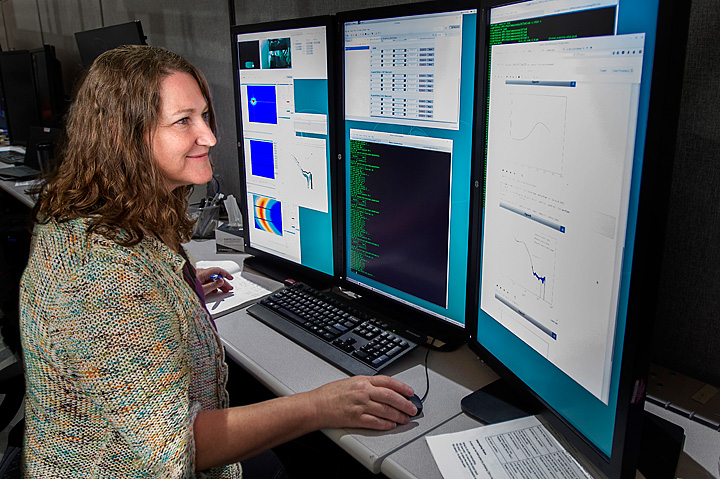 Joanna Krueger was named the 1000th user at NSLS-II on June 28. Krueger uses NSLS-II to study "sleeping beauty" transposase, an inactive enzyme found in fish that becomes active when inserted into human cells.

The latest beamline to transition into operations was beamline 2-ID, which enables scientists to measure a sample’s response across a range of angles—nearly a full circle around the sample—using high-intensity soft x-rays. This technique is used to determine dynamics of electrons in a wide variety of materials.

“This beamline will offer world-leading capabilities in terms of soft inelastic x-ray scattering,” said Qun Shen, Deputy Director for Science at NSLS-II. “It is going to be a really cutting-edge technique for studying dynamics and catalysis.”

Beamline 2-ID is particularly notable for its ability to study light that bounces off individual atoms, but achieving world-class capabilities is the goal for every beamline at NSLS-II.

Such is the case for 8-BM, a new beamline that uses tender x-rays to image and probe elements that are common in biological structures. 8-BM offers tender energy x-rays—x-rays with an energy from one kiloelectron volt (keV) to four keV—and, amongst other capabilities, allows scientists to study environmental questions – for example, how nuclear materials decay and affect the environment.

“From five or six keV and up is relatively straightforward to achieve,” Shen said. “But very few beamlines around the world can put emphasis on the tender x-ray energy.”

Another new beamline, 4-ID, started general user operations in July. This beamline combines the versatile control of beam size, energy, and polarization to enable real-time studies of materials growth and processing, measurements of the atomic structure of functional surfaces and interfaces, and characterization of the electronic order in quantum materials.

Brookhaven is also partnering with outside institutions to fund the construction and operations of new beamlines at NSLS-II. For example, beamline 17-BM was established through a partnership with the Case Center for Synchrotron Biosciences at Case Western Reserve University. This beamline uses wide-beam x-rays to modify proteins and monitor their structural changes, a “footprinting” technique that was previously unavailable at NSLS-II. 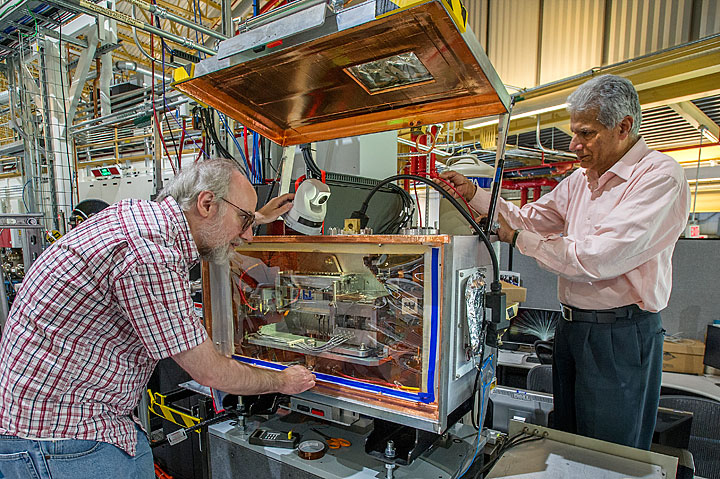 One of NSLS-II’s biggest partners is the National Institute of Standards and Technology (NIST), a government organization that promotes innovation and enhances industrial competitiveness in the U.S. NIST is funding the construction and operations of three beamlines at NSLS-II: two spectroscopy beamlines currently under construction, and beamline 6-BM, which had first light on July 25. At 6-BM, researchers can use x-ray absorption spectroscopy and x-ray diffraction to study how atoms stack together to make materials like batteries and computer chips.

Other facilities within Brookhaven Lab are also working with NSLS-II on new beamlines, such as beamline 11-BM. This beamline was established through a partnership with Brookhaven’s Center for Functional Nanomaterials.

“This is where scientists can do x-ray scattering in real time to see how thin films of nanostructures self-organize into something that may be very useful,” Shen said. “Before this beamline came on board, we didn’t have such a dedicated capability.”

The beamlines at NSLS-II are continuously undergoing changes to improve and expand their functionality. At beamline 3-ID, for example, scientists developed a new imaging method that allows researchers to view an x-ray-transparent sample in real time with quantitative phase measurement.

In addition to opening new beamlines and making new research techniques available to scientists, NSLS-II’s second year of operations was notable for important scientific breakthroughs. Researchers used beamline 8-ID to develop new cathode materials that could facilitate the mass production of sodium batteries. Another team of researchers used beamline 23-ID-1 to advance the study of high-temperature superconductivity, a phenomena that has baffled scientists for decades. The team discovered that static ordering of electrical charges may cooperate, rather than compete, with superconductivity.

There is a bright future ahead for NSLS-II. 8 beamlines are currently under construction, and the NSLS-II team is working with the scientific community to develop the next set of beamlines to build. Other future plans for NSLS-II include streamlining logistics for users and making beam time available on multiple beamlines with a single proposal.

“The last two years have been exciting as we have watched the NSLS-II user community grow and the numbers increase,” said Gretchen Cisco, User Administration Manager at NSLS-II. “We are continuously identifying ways to improve the NSLS-II user experience. Based on user feedback, we are updating the proposal allocation and scheduling system to make it easier to apply for beam time.”

From its world-class beamlines to the accessibility for its users, NSLS-II has already distinguished itself as a pillar of synchrotron science.