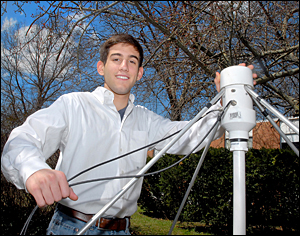 Glen Meyerowitz in the courtyard of Brookhaven Lab's Physics building with one of the radar antennas used to collect data on high-energy cosmic rays.

Meyerowitz was among approximately 250 students presenting work at the symposium, which was held in Colorado Springs from April 29 to May 3. He will receive a $2,000 scholarship from the event's sponsors, the U.S. Army, Navy, and Air Force, for his project titled "Uncovering Elusive Ultra High Energy Particles: Development of A Method For Cosmic Ray Detection."

Meyerowitz will also present his work at the Intel International Science and Engineering Fair in Reno, NV, which begins today, May 10, and runs until May 15.

To learn more about Meyerowitz and his research on high-energy cosmic rays, read this profile published on April 22, 2009.