Pointing to long-awaited increases in support for science, government and Laboratory officials painted a bright picture for the future of research in the United States and Brookhaven at the 2009 joint meeting of the National Synchrotron Light Source (NSLS) and Center for Functional Nanomaterials (CFN) user communities. About 400 visiting scientists, staff members, and scientific leaders attended the annual meeting, which ran from May 18-20.

"Since we last met, there have been some extraordinary changes," said NSLS Users' Executive Meeting Chair John Parise in his opening remarks. "The funding climate in the last six months has been quite the contrast from where we were at this time last year."

Laboratory Director Sam Aronson highlighted some of those changes, such as $150 million in unexpected stimulus funding for the National Synchrotron Light Source II -- a "key component to the future vision of the Laboratory." Other major Laboratory achievements include the establishment of a U.S. Department of Energy (DOE)-funded Energy Frontier Research Center at Brookhaven that will examine the underlying nature of superconductivity in complex materials, and New York State's decision to build a 200-acre solar panel array on Lab property.

"The Laboratory will derive some power from this new array when it's built two years from now, but it also provides the potential to develop a research program related to solar energy," Aronson said, adding that New York State, IBM, and other industries already have expressed interest in such a program.

Next, Harriet Kung, Director of DOE's Office of Basic Energy Sciences (BES), told the audience that "finally, this is a year that we can report some good news after two years of a constrained budget." 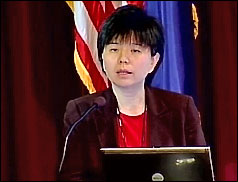 Harriet Kung's address is available as a streaming video in Real format on WBNL.

The Obama administration has "very ambitious and visionary" environmental and energy goals for the country, Kung said, including: saving more oil within the next 10 years than is currently imported from the Middle East and Venezuela combined; putting 1 million plug-in hybrid cars on the road by 2015; generating 10 percent of the country's electricity from renewable resources by 2012, and 25 percent by 2025; and implementing an economy-wide, cap-and-trade program to reduce greenhouse gas emissions 80 percent by 2050.

To align with these goals, Kung said, DOE has set out the following priorities:

In addition, more than half of the BES stimulus funds will provide support for some of the newly created Energy Frontier Research Centers. DOE has created 46 of these centers, which represent 110 institutions in 36 states and DC.

"We recognize that as a companion to the one-time construction and equipment purchases, there has to be a sustained science program to go with it," Kung said. "That's the reason for our commitment to provide $277 million to fully fund five years of 16 Energy Frontier Research Centers."

The funding picture is expected to continue in its rosy hue, Kung said, with a requested 7 percent increase in the BES budget in FY10.

A New Era of Light

"For many years, detectors have lagged well behind the improvements made to accelerators," he said, adding that DOE has the largest complex of accelerator-based facilities in the world. "This has always been a weak spot in light source development. And for the first time, we're able to dedicate funds to accelerator and detector research."

After giving a brief update on the status of current and future projects, he then told the audience about the Linac Coherent Light Source (LCLS) at the SLAC National Accelerator Laboratory. LCLS is the world's brightest x-ray source and gave researchers the first-ever glimpse of a high-energy or "hard" x-ray laser light produced in a laboratory when it was turned on in April, one year ahead of schedule.

"This is a tremendous success," Montano said, mentioning that two other free-electron laser sources are under construction around the world, including SPring-8's Compact SASE Source in Japan and the European X-ray Free Electron Laser in Germany.

Next, Steve Dierker, Associate Laboratory Director for Light Sources, gave an update on the "busy and exciting year" surrounding NSLS-II, which will have a start-of-construction celebration on June 15. The project received DOE's Critical Decision 3 (CD-3) approval in January, awarded a major contract to construct the ring building to a general contractor in February, and remains within budget and on schedule for completion by June 2015. This progress is partly due to $150 million in stimulus funding that will accelerate the facility's construction.

"This isn't additional funding -- the overall project cost is still $912 million," Dierker said. "But it provides more funds earlier than the original funding profile and enables us to pull work forward, creating more jobs sooner than we would have otherwise been able to do."

Still, this is just the beginning, Dierker said, noting that about 85 percent of the work to complete the project remains.

NSLS Update: Back on Financial Track

NSLS staff and users are extremely grateful for the increased funding allocated in the FY09 budget, especially after continuous years of flat funding, said NSLS Chair Chi-Chang Kao. The department will receive an additional $3.6 million, which will allow staff to complete a handful of construction projects that were put on hold in the face of previous funding shortages. In addition, it will enable the purchase of maintenance components, the addition of advanced detectors to existing experimental systems, the hiring of staff in areas that have been under a critical shortage. It will also provide more beamline support.

"Once we know how this works, we'll develop training tools for others techniques," Kao said.

Other recent NSLS activities include: the creation of methods and instrument-development teams, which will link staff members with users to create instruments for transition to NSLS-II and help maintain the financial and intellectual contributions expected to be lost by the exit of the facilityÃ¢â‚¬â„¢s participating research teams; the launch of a new initiative to attract and enhance industrial involvement; and the reduction of experimental floor laboratories so that they can be supported and maintained better.

In addition, Kao told the audience about the Joint Photon Sciences Institute's (JPSI) first workshop, hosted along with IBM, the National Institute of Standards and Technology, and Albany Nanotech. The event brought together synchrotron experts and microelectronics researchers to talk and put together a road map about the major scientific challenges they face and how synchrotron-based tools might help.

CFN Director Emilio Mendez told the audience that the science outlook of the new leadership in the White House will benefit the CFN and nanoscience research at large.

"There's a new climate in the nation and DOE for science, especially in energy sciences," he said. "And that will, and already is, impacting our work at the CFN."

The effect can already be seen in the CFN's budget, which increased almost 10 percent from FY08 to FY09, Mendez said. In addition, the facility will be able to undergo various upgrades with the $4.8 million received in stimulus funds.

In its first year of operation, the CFN saw a significant increase in both staff and users, Mendez reported. CFN staff currently numbers 45, with plans to expand that to 60 by the year 2010. User proposals have doubled since last year. And more often, users are requesting additional facility time in subsequent proposal cycles, an important step toward achieving the goal of becoming a "user-oriented research center that is considered a resource for world-class projects on nanoscience," said Mendez.

Throughout the main meeting, guest speakers highlighted their research, spanning from energy applications in nanoscience to space dust. First up was keynote speaker Mildred Dresselhaus, a professor of electrical engineering and physics from the Massachusetts Institute of Technology. In her talk, "The Promise of Nanoscience for Energy Related R&D," Dresselhaus stressed that because of the increasing world population, many countries are pledging to use 20 percent renewable energy by 2020. The key to achieving these energy solutions is conducting research on the nanoscale, where everyday materials take on different properties. Highlighting several approaches -- including solar energy, photovoltaics, water splitting, and superconductivity -- Dresselhaus showed how nanomaterials and basic research will help revolutionize the energy field.

Later in the morning, University of Washington professor David Brownlee discussed using the NSLS to analyze comet samples collected by NASA's Stardust spacecraft. Because comets formed at the cold edge of the solar system, they are the best-preserved historical samples of our sun and planets, Brownlee said. He outlined the findings of the study and the challenges the researchers faced, from the physical collection of the speeding comet particles to the various synchrotron techniques needed in the lab.

The last science speaker was SLAC National Accelerator Laboratory physicist Uwe Bergmann, who discussed "Advanced Hard X-Ray Spectroscopy -- Recent Results on Water and 3d Transition Metal Systems." In his talk, Bergmann pointed to new opportunities with novel applications of hard x-ray spectroscopy, including new studies on water and the effects of isotope substitution and confinement on its local structure.