Rainy and windy weather courtesy of Hurricane José didn’t dampen the spirits of more than 500 members of the Brookhaven Lab community who came out on Sept. 19 to mark two milestone anniversaries: 70 years since the Laboratory's founding in 1947 and a century since the 1917 founding of Camp Upton, the former U.S. Army base where the Lab operates today. 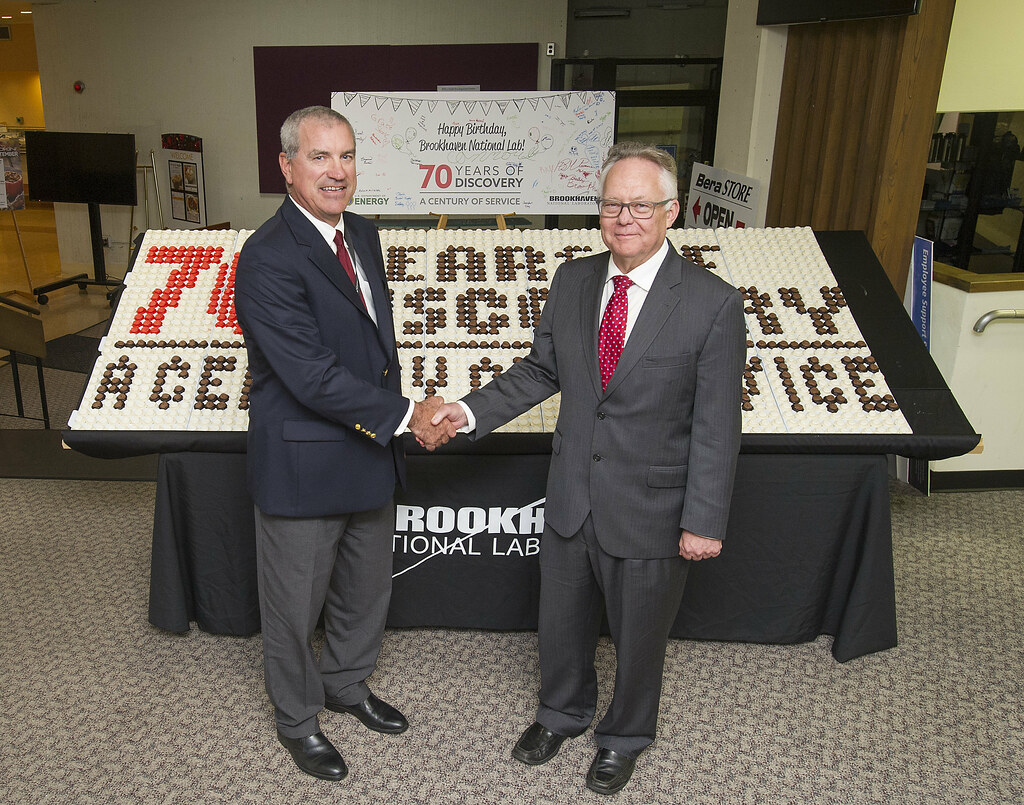 A photo slideshow of the many BNLers who celebrated the Lab's milestone anniversaries on Sept. 19.

“It was great to see so many people come out to celebrate,” said Lab Director Doon Gibbs, who highlighted many achievements of Brookhaven Lab and its staff during remarks at the event.

“I want to thank and recognize all of our employees. You are the center of Brookhaven’s success and the driving force behind everything that we have accomplished,” said Gibbs. “In my opinion, just by working here we are all making the world a better place by working together to build facilities and address issues that align with the mission of the U.S. Department of Energy and are of critical importance to our nation. We have a remarkable scientific history, many achievements, and a world-class workforce. I look forward to sharing our future accomplishments with you—congratulations to all.”

Frank Crescenzo, Manager of the U.S. Department of Energy’s (DOE) Brookhaven Site Office, said, “Long Island is unlike most other parts of our country. You don't go for a drive and end up on Long Island. You don't drive through Long Island on your way to somewhere else.  You come here for a purpose.

“Long before there was Tanger Mall or ‘the Hamptons,’ there was Camp Upton, followed by the founding of Brookhaven National Laboratory. Our purpose is to serve our nation, and you have done an excellent job at doing that,” Crescenzo said.

Crescenzo added that Brookhaven has promoted educational opportunities since its earliest days. And, for the past 70 years, the Lab has attracted people from all over the world.

“Seventy years of discovery and 100 years of service are achievements to be proud of,” Crescenzo added. “DOE and the Site Office share your pride and enthusiasm. Congratulations!”

A video message from U.S. Department of Energy Secretary Rick Perry, congratulating Brookhaven Lab on its 70 years of discovery.

“Brookhaven is a shining example of America’s world-class research facilities,” said Perry. “On behalf of everyone across the DOE enterprise, let me say congratulations and happy anniversary. I look forward to the discoveries you will achieve in the decades ahead.”

Before the ceremony concluded, David Manning, Director of the Lab’s Stakeholder & Community Relations Office, recognized the generosity of the Lab community and presented Donna Horoski of the United Way of Long Island with a check for $160 thousand. Lab employees raised these funds during their most recent annual campaign for the United Way, part of the Lab’s commitment to excellence in community relations along with excellence in science and operations.

Following the ceremony, attendees gathered in the lobby and cafeteria, where they enjoyed refreshments and were entertained by live music performed by fellow employees. Perhaps the favorite dessert station was the large mosaic of 2,100 cupcakes, designed in the shape of the 70-100 anniversary logo.

Two thousand one hundred cup cakes were prepared for members of the Lab community who gathered on Sept. 19 to celebrate 70 years of discovery at the Lab and the 100th anniversary of Camp Upton's founding.

Continuing celebrations for the Brookhaven’s milestone anniversary, members of the Lab community are invited to be in a photo, forming a big “70,” on Wednesday, Oct. 11, at 3 p.m. at the field across from Berkner (next to Bldg. 438).

Gibbs and Crescenzo’s remarks from the event are available online here.