Celebrating the 60th Anniversary of Technetium-99m

Invention of the Tc-99m generator put a life-saving diagnostic tool in the hands of doctors. 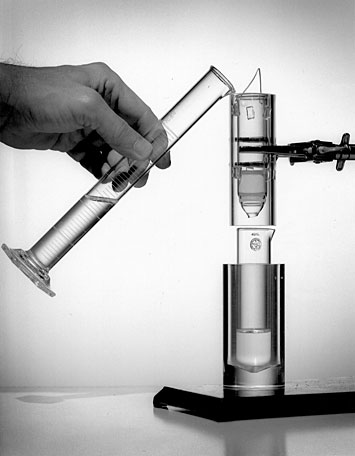 Perhaps you or someone you know has had a cardiac stress test—a type of scan where doctors take a peek inside a patient’s heart to watch the blood flow and look for heart disease and other potentially threatening conditions. More than 40 million patients have this or similar medical imaging procedures each year, allowing doctors to take action in time to save lives.

What makes these scans possible is a “medical radioactive tracer”—a radioactive form of a chemical element attached to a drug. Doctors inject this drug into the bloodstream and monitor the blood flow by following the gamma rays emitted as the tracer decays.

The technology developed to put that powerful tracer in the hands of doctors was invented 60 years ago at the U.S. Department of Energy’s (DOE) Brookhaven National Laboratory.

The tracer, technetium-99m (Tc-99m), is the radioactive isotope responsible for 80 percent of the nuclear medical imaging procedures performed in the world. Though the element technetium was discovered in the 1930s, it wasn’t readily available for imaging procedures until three Brookhaven researchers—Walt Tucker, Powell “Jim” Richards, and Margaret Greene—developed a way to generate the isotope on the spot in hospitals. Their invention, a Tc-99m “generator,” changed the face of nuclear medicine simply by creating accessibility.

Harvesting by half life

“What sets technetium apart is its short half-life relative to the long half-life of its parent element,” explained Cathy Cutler, director of the Medical Isotope Research and Production program at the Lab. Tc-99m’s half-life, or the amount of time it takes for radioactivity to fall to half the original amount, is relatively short, only 6 hours, so it must be used close to when it is produced. But its “parent,” the element molybdenum-99 (Mo-99), which decays to produce Tc-99m, has a half life of 66 hours. That means the relatively stable Mo-99 can be transported to hospitals over longer distances to generate Tc-99m on location at the hospital as it decays. 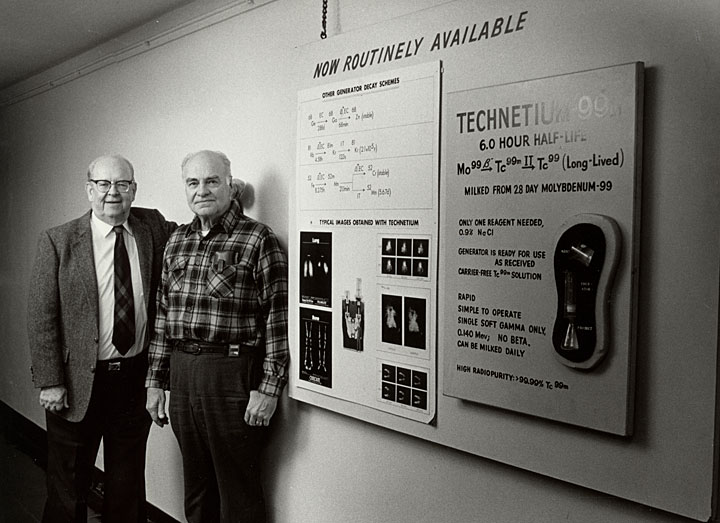 At the heart of the generator is a “column” no longer than a ballpoint pen, explained Leonard Mausner, a Brookhaven scientist who has done research on medical radioisotopes. The column is a hollow glass tube filled with the absorbent compound alumina that holds and retains the molybdenum. At the hospital, a pharmacist or technologist pours a simple saline solution through the column to separate the decay product, Tc-99m, leaving the Mo-99 behind. The resulting saline contains the separated Tc-99m.

Scientists have likened the process to milking a cow, so they nicknamed the generator a “moly cow.”

Despite its prevalence today, the moly cow wasn’t an instant hit. When the Brookhaven team applied for a patent on their generator design, the patent office replied, “We are not aware of a potential market for technetium-99m great enough to encourage one to undertake the risk of patenting.”

Tucker and Greene weren’t even sure of the potential of their invention at the time. In fact, their discovery of a way to generate this now-useful isotope had been unintended.

“Brookhaven was founded in 1947 on the idea of the peaceful application of nuclear research,” said David Schyler, a scientist emeritus familiar with the history of the isotope program. Medical applications using radiation including isotopes for diagnosing disease and new forms of treatment were increasingly popular research topics.

In the late 1950s, the Hot Division Lab where Tucker and Greene worked as chemists had been trying to develop a generator to separate iodine-132 from its parent tellurium. Other isotopes of iodine were known to treat thyroid cancer but scientists believed that the shorter half-life of iodine-132 would prove useful in medical studies. But they encountered an impurity in the separation process that turned out to be molybdenum, which they found decayed into Tc-99m. The similarities in chemistry between iodine-tellurium and technetium-molybdenum prompted Tucker and Greene to create the technetium generator. 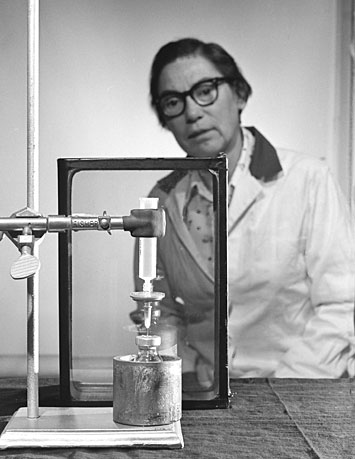 Lucky for them, Richards, who was in charge of radioisotope production, had an idea for how their invention could be practically applied. He and his group were primarily interested in isotopes with potential medical application, and he began attending and giving talks on nuclear medicine, along with Suresh Srivastava, another scientist involved in research on radioisotopes at Brookhaven.

“Jim’s first talk on Tc-99m was in 1960 at a nuclear medicinie conference in Italy, where he was able to astound the whole audience,” Srivastava said. Also in 1960, Richards was the first to convince a physician to try technetium as an agent for medical imaging.

As Srivastava explained, Richards realized that Tc-99m had ideal properties for medical applications. The wavelengths of the gamma rays emitted by technetium are about the same as the typical x-ray machine and technetium’s short half-life keeps the amount of radiation exposure experienced by a patient low.

“Richards played a significant role in getting the nuclear medicine physician community to pay attention to the medical utility of the [technetium] generator,” Mausner said.

Learn more about Brookhaven’s historical development of Tc-99m at a 60th anniversary symposium to be held at the Lab.

WHERE: The Hamilton Seminar Room and Lobby of the Chemistry Building, Bldg. 555, Brookhaven National Laboratory. The Laboratory is on William Floyd Parkway at the intersection with Longwood Road, 1.5 miles north of Exit 68 of the Long Island Expressway.

DETAILS: At this free event, speakers will present talks on technetium and nuclear medicine, including the history of the development of the Tc-99m generator at Brookhaven. The talks will be followed by a reception in the Chemistry Lobby.

All visitors to the Laboratory 16 and older must bring a photo ID.

While technetium proved to be an ideal tracer for creating medical images, Tc-99m does not attach to organs in the body on its own. The radioisotope must first be bound to a pharmaceutical drug designed to carry the tracer to the part of the body to be imaged.

“Technetium has a fairly complex chemistry,” Cutler explained. “You basically needed an inorganic chemist to form these compounds.” The problem was, every chemist had his or her own formula. “Kind of like how every grandma has her own cake recipe,” Cutler said.

This variation impeded progress in Tc-99m research; there needed to be a singular unified recipe to run clinical trials to verify that tracers made from this isotope would be effective diagnostic tools. So Brookhaven scientists developed a way to bag all the ingredients for transforming the radioisotope into a testable drug—effectively, an easy-to-use kit.

“It’s basically a small vial that contains all the ingredients minus the technetium. Once the technetium is added, everyone is making the same drug,” Cutler explained. “With the development of the generator and these kits, it meant that most hospitals could now do nuclear medicine on their own.”

With no chemist needed on site, medical personnel could simply add the Tc-99m they’d milked from the moly cow and shake the vial to create the drug.

Today these Tc-99m “shake-n-bake” kits, as the scientists dubbed them, allow for more than just cardiac stress tests. Tc-99m is used in bone scans, brain imaging, to monitor a number of other diseases, and even to identify cancer cells. Its importance as a medical tracer has become unparalleled, and its accessibility is the key to its success.

As Srivastava noted at the dedication of a molybdenum-99 plant in the Netherlands in 1998, to say that “nuclear medicine to a large extent owes its emergence and existence to Tc-99m would not be an exaggeration!”

Brookhaven’s work on medical isotopes continues to this day as part of the DOE Isotope Program. The Lab was recently recognized for its historical role in the synthesis of a radiotracer that revolutionized brain imaging and cancer diagnosis, and currently has a new focus on developing isotopes that can potentially eradicate certain cancers. Today’s isotope production and research program is supported by the DOE’s Office of Science.