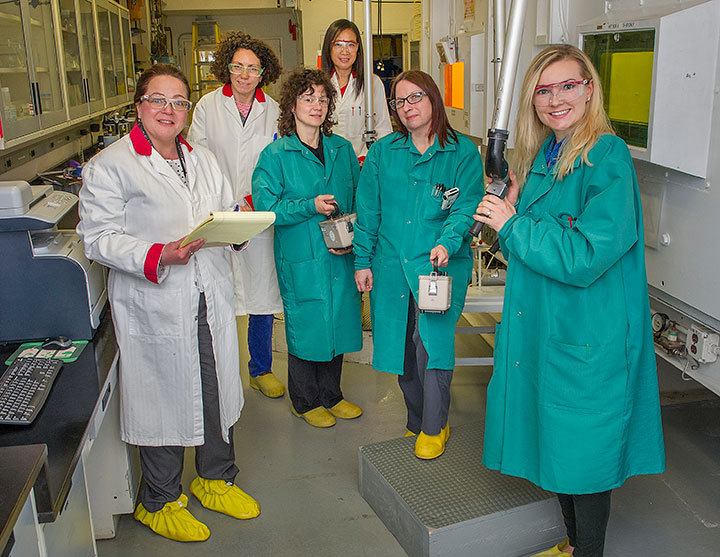 The before and after images are stunning: A prostate cancer patient riddled with metastatic tumors that disappear after just three potent treatments.

“Two patients underwent these treatments and they were cured,” said Cathy Cutler, director of the Medical Isotope Research and Production Program at the U.S. Department of Energy’s Brookhaven National Laboratory. “Their cancer was gone.

“This is what we want to do—supply this material so that more patients can get this treatment,” she said. 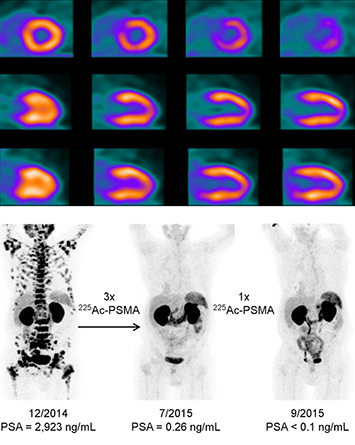 Medical applications of isotopes produced at BLIP Top: BLIP produces Strontium-82, a relatively stable isotope that can be transported and used in hospitals to generate Rubidium-82, a radiotracer that reveals reduced blood flow in heart muscle under stress. This precision scanning points physicians to coronary arteries that need treatment. Credit: Washington University School of Medicine. Bottom: Before and after images show how a molecule labeled with Actinium-225 delivers cell-killing alpha particles directly to tumors, eradicating metastatic prostate cancer. The BLIP team aims to increase the production of Ac-225 so scientists can conduct large-scale trials and get this potentially lifesaving treatment to more patients. Credit: ©SNMMI: C. Kratochwil. J. Nucl. Med., 2016; 57 (12); 1941.

The material is a molecule tagged with Actinium-225, a radioactive isotope. When designed to specifically bind with a protein on the surface of cancer cells, the radiolabeled molecule delivers a lethal, localized punch—alpha particles that kill the cancer with minimal damage to surrounding tissues.

Actinium-225 can only be produced in the large quantities needed to support clinical applications at facilities that have high-energy particle accelerators.

“This is why I came to Brookhaven,” Cutler said in a recent talk she gave to highlight her group’s work.* “We can make these alpha emitters and this is really giving doctors a chance to treat these patients!”

Brookhaven Lab and the Department of Energy Isotope Program have a long history of developing radioisotopes for uses in medicine and other applications. These radioactive forms of chemical elements can be used alone or attached to a variety of molecules to track and target disease.

“If it wasn’t for the U.S. Department of Energy and its isotope development program, I’m not sure we’d have nuclear medicine,” Cutler said.

Among the notable Brookhaven Lab successes are the development in the 1950s and 60s, respectively, of the Technetium-99m generator and a radioactively labeled form of glucose known as 18FDG—two radiotracers that went on to revolutionize medical imaging.

Brookhaven is one of just a few facilities in the DOE Isotope Program that can produce certain critical medical isotopes.

As an example, 18FDG emits positrons (positively charged cousins of electrons) that can be picked up by a positron emission tomography (PET) scanner. Because rapidly growing cancer cells take up glucose faster than healthy tissue, doctors can use PET and 18FDG to detect and monitor the disease.

“FDG turned around oncology,” Cutler said. Instead of taking a drug for months and suffering toxic side effects before knowing if a treatment is working, “patients can be scanned to look at the impact of treatment on tumors within 24 hours, and again over time, to see if the drug is effective—and also if it stops working.”

While Tc-99m and 18FDG are now widely available in hospital settings and used in millions of scans a year, other isotopes are harder to make. They require the kind of high-energy particle accelerator you can find only at world-class physics labs.

“Brookhaven is one of just a few facilities in the DOE Isotope Program that can produce certain critical medical isotopes,” Cutler said.

Brookhaven’s linear accelerator (“linac”) was designed to feed beams of energetic protons into physics experiments at the Relativistic Heavy Ion Collider (RHIC), where physicists are exploring the properties of the fundamental building blocks of matter and the forces through which they interact. But because the linac produces the protons in pulses, Cutler explained, it can deliver them pulse-by-pulse to different facilities. Operators in Brookhaven’s Collider-Accelerator Department deliver alternating pulses to RHIC and the Brookhaven Linac Isotope Producer (BLIP).

“We operate these two programs symbiotically at the same time,” Cutler said. “We combine our resources to support the running of the linear accelerator; it’s cheaper for both programs to share this resource than it would cost if each of us had to use it alone.”

BLIP operators aim the precisely controlled beams of energetic protons at small puck-shaped targets. The protons knock subatomic particles from the targets’ atoms, transforming them into the desired radioactive elements.

“We stack different targets sequentially to make use of the beam’s reduced energy as it exits one target and enters the next in line, so we can produce multiple radionuclides at once,” Cutler said.

Transformed targets undergo further chemical processing to yield a pure product that can be injected into patients, or a precursor chemical that can easily be transformed into the desired isotope or tracer on site at a hospital.

“A lot of our work goes into producing these targets,” Cutler said. “You would be shocked at all the chemistry, engineering, and physics that goes into designing one of these pucks—to make sure it survives the energy and high current of the beam, gives you the isotope you are interested in with minimal impurities, and allows you to do the chemistry to extract that isotope efficiently.”

Cutler recently oversaw installation of a new “beam raster” system designed to maximize the use of target materials and increase radioisotope production. With this upgrade, a series of magnets steers BLIP’s energetic particle beam to “paint” the target, rather than depositing all the energy in one spot. This cuts down on the buildup of target-damaging heat, allowing operators to increase beam current and transform more target material into the desired product.

The new raster system and ramped up current helped increase production of one of BLIP’s main products, Strontium-82, by more than 50 percent in 2016. Sr-82 has a relatively long half-life, allowing it to be transported to hospitals in a form that can generate a short-lived radiotracer, Rubidium-82, which has greatly improved the precision of cardiac imaging.

“Rb-82 mimics potassium, which is taken up by muscles, including the heart,” Cutler explained. “You can inject Rubidium into a patient in a PET scanner and measure the uptake of Rb-82 in heart muscle to precisely pinpoint areas of decreased blood flow when the heart is under stress. Then surgeons can go in and unblock that coronary artery to increase blood flow before the patient has a heart attack. Hundreds of thousands of patients receive this life-saving test because of what we’re doing here at Brookhaven.”

But rising to meet the demand for isotopes that have the potential to cure cancer may be BLIP’s highest calling—and has been a key driver of Cutler’s career.

Driving an 80-ton semi truck into a tumor

“We want to go beyond imaging to therapy,” she said, noting the promise of designing molecules to deliver cancer-killing radiation with extreme precision. 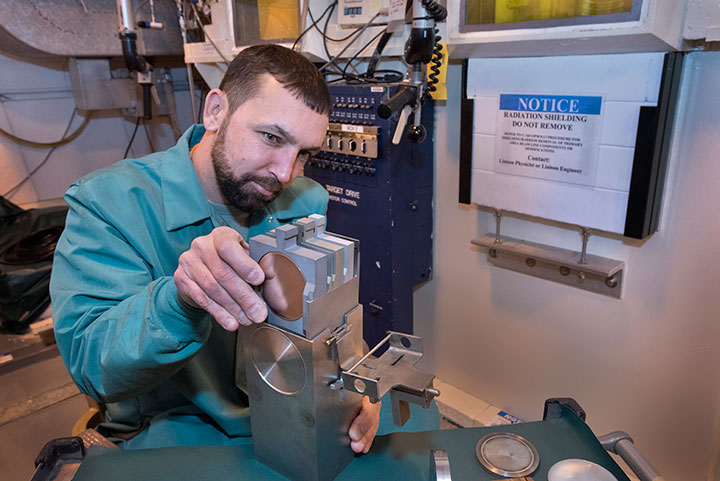 Jason Nalepa, a BLIP operator, prepares targets to be installed in the BLIP beamline for irradiation

“This is where I started as a chemist at the University of Missouri—designing molecules that have the right charges, the right size, and the right characteristics that determine where they go in the body so we can use them for imaging and therapy,” she said. “If we can target receptors that are overexpressed on tumor cells, we can selectively image these cells. And if there are enough of these receptors expressed, we can deliver radionuclides to those tumor cells very selectively and destroy them.”

Radionuclides that emit alpha particles are among the most promising isotopes because alpha particles deliver a lot of energy and traverse very small distances. Targeted delivery of alphas would deposit very high doses—“like driving an 80-ton semi truck into a tumor”—while minimizing damage to surrounding healthy cells, Cutler said.

“Our problem isn’t that we can’t cure cancer; we can ablate the cancer. Our problem is saving the patient. The toxicity of the treatments in many cases is so significant that we can’t get the levels in to kill the cancer without actually harming the patient. With alpha particles, because of the short distance and high impact, they are enabling us to treat these patients with minimal side effects and giving doctors the opportunity to really cure cancer.”

Making the case for a cure

One experimental treatment Cutler developed using Lutetium-177 while still at the University of Missouri worked favorably in treating neuroendocrine tumors, but didn’t get to a cure state. Actinium-225, one of the isotopes that is trickier to make, has shown more promise—as demonstrated by the prostate cancer results published in 2016 by researchers at University Hospital Heidelberg.

Right now, according to Cutler, DOE’s Oak Ridge National Laboratory (ORNL) makes enough Ac-225 to treat about 50 patients each year. But almost 30 times that much is needed to conduct the clinical trials required to prove that such a strategy works before it can move from the laboratory to medical practice.

“With the accelerator we have here at Brookhaven, the expertise in radiochemistry, and experience producing isotopes for medical applications, we—together with partners at ORNL and DOE’s Los Alamos National Laboratory—are looking to meet this unmet need to get this material out to patients,” Cutler said.