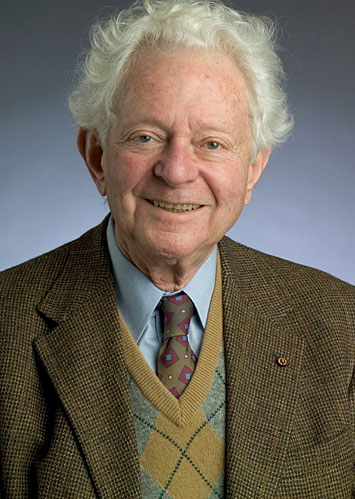 Leon Lederman, a co-winner of the 1988 Nobel Prize in physics for the discovery of the muon neutrino, spent his life as a leader in a range of roles promoting science. He died on October 3, 2018, at the age of 96.

Lederman conducted his Nobel Prize-winning research at the U.S. Department of Energy’s Brookhaven National Laboratory in the early 1960s with Melvin Schwartz and Jack Steinberger, went on to serve as director of Fermi National Accelerator Laboratory from 1978 to 1989, and was a staunch supporter of science education and outreach throughout his life.

“Leon Lederman was a remarkable scientist, science leader, educator, and mentor,” said Brookhaven Lab Director Doon Gibbs. “His life has had lasting impact not just on physics, but also on how all science is carried out and taught. At Brookhaven we remember him for many reasons, but his discovery of the muon neutrino with Mel Schwartz and Jack Steinberger will always be an important part of our history as a laboratory. The Brookhaven family extends our sincere condolences to all his friends and family.”

Lederman was born on July 15, 1922, to Russian-Jewish immigrant parents in New York City. His father, who operated a hand laundry, revered learning. Lederman graduated from the City College of New York with a degree in chemistry in 1943. He served three years with the United States Army in World War II and then returned to Columbia University in New York to pursue his Ph.D. in particle physics, which he received in 1951. During graduate school, Lederman joined the Columbia physics department in constructing a 385-million-electron-volt particle accelerator at Nevis Lab at Irvington-on-the Hudson, New York. He remained as part of that collaboration for 28 years, eventually serving as director of Nevis labs from 1961 to 1978.

Lederman conducted his first research at Brookhaven Lab in 1956, working as part of a Columbia University team that used the 3.3-billion-electron-volt Cosmotron to discover the long-lived neutral K meson.

He conducted his Nobel Prize-winning experiment in 1962 with Columbia University colleagues Schwartz and Steinberger. The trio came to the Lab to use the 33-billion-electron-volt Alternating Gradient Synchrotron (AGS) to search for signs of different types of ghostlike particles called neutrinos. At the time, only the electron neutrino was known, and the scientists wondered if they could find more types of these elusive particles that pass through everything. The AGS, then the most powerful accelerator in the world, was capable of producing the beam needed.

The experiment used a beam of the AGS's energetic protons to produce a shower of pi mesons, which traveled 70 feet toward a 5,000-ton steel wall made of old battleship plates. On the way, they decayed into muons and neutrinos, but only the latter particles could pass through the wall into a neon-filled detector called a spark chamber. There, the impact of neutrinos on aluminum plates produced muon spark trails that could be detected and photographed — proving the existence of muon-neutrinos.

The experiment's use of the first-ever neutrino beam paved the way for scientists to use these particles in research at the AGS and around the world. Lederman, Schwartz, and Steinberger were awarded the 1988 Nobel Prize in physics for their muon neutrino discovery.

Nicholas Samios, a former director of Brookhaven Lab who conducted his own Ph.D. research at Columbia University with the guidance of Steinberger and Schwartz and was a member of the Lab’s physics department at the time of their seminal experiment, said, “Leon Ledermann had a distinguished, prolific, extraordinary career as an experimental physicist, educator, and spokesman for science. In these capacities he exerted an enormous influence on the development and progress of science in the United States and the world at large.”

Leon Lederman is survived by his wife of 37 years, Ellen, and three children, Rena, Jesse and Rachel, from his first wife, Florence Gordon. For more information about Lederman’s life and his contributions to science, see the Fermilab obituary, from which some material for this story was taken.