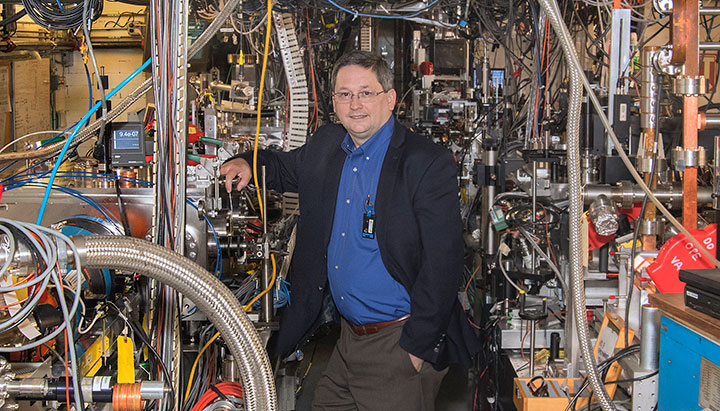 This is a continuing profile series on the directors of the Department of Energy (DOE) Office of Science user facilities. These scientists lead institutions that provide researchers with the most advanced tools of modern science including accelerators, colliders, supercomputers, light sources and neutron sources, as well as facilities for studying the nano world, genomics, the environment, and the atmosphere.

When you're running an accelerator facility that's in the middle of a major transition, you need someone who can adapt to changes as quickly as the particles in your machines move. In 2016, the Accelerator Test Facility (ATF) was working to maintain its flexibility while also adapting to its new status as a DOE Office of Science national user facility. Fortunately, ATF's leadership found ATF director Mark Palmer, who's been guiding the facility ever since.

Spurring innovation in the midst of change isn't new to Palmer.

Although he started his graduate career in high energy physics, his thesis led him down a different path. "My advisor and I took a bit of a detour," he says. They looked for evidence of forces beyond those described by Isaac Newton to explain gravity. Attempting to measure these weak forces led them to work in quirky locations — including the side of a mountain. But their observations showed no evidence for a component of gravity beyond those described by Newton.

Undeterred, Palmer pursued post-graduate work in high energy physics working on the Cornell Electron Storage Ring. He welcomed the chance to get hands-on with the accelerator, which is located under one of the university's athletic fields.

"I got heavily engaged with the interaction between the particle detector and the accelerator itself," he says.

Discovering a love for accelerator technology, he started tackling innovative projects. He designed portions of the proposed International Linear Collider (ILC), a massive accelerator planned to be built in Japan. Palmer contributed to a number of technologies and techniques developed for the ILC that are already being used in other accelerators around the world. A stint at DOE's Fermilab managing the U.S. Muon Accelerator Program gave him experience working with these subatomic particles that are similar to electrons but 200 times as heavy and unstable.

Being able to shift gears quickly and seamlessly prepared him to lead the ATF.

While "Accelerator Test Facility" is the ATF's name, its users do much more than testing. For the past 25 years, the ATF has been essential to the accelerator research community. These researchers work to make particle accelerators — which speed up particles to nearly the speed of light — smaller, more powerful, and more cost-efficient.

About half of the ATF's users are from universities. The rest are from industry and research laboratories, such as the DOE's national laboratories and others in the federal government. The facility collaborates with 20 institutions and supports more than 20 experiments at any one time.

The ATF provides researchers a chance to get quite hands-on.

"I think the great thing about the ATF is that it offers a very, very flexible user experience," says Palmer.

At most user facilities, researchers use the machine, record their data, and analyze the results at their home institutions. Palmer and the ATF staff encourage a more iterative process. Researchers can customize the accelerator, run their experiments, examine the findings, go back, make further modifications, and try again. A number of experimental chambers built into the accelerators enable researchers to creatively design and execute their experiments.

Even graduate students can do demonstrations quickly and cost-efficiently at the ATF. "It has a very long tradition as a training ground for accelerator physicists," says Palmer.

To complement that flexibility, the ATF packs a lot of technologies into its space. It's the only DOE user facility to provide both a linear accelerator that produces beams of electrons and an extremely powerful carbon dioxide laser. Using its two electron beamlines, scientists can examine how to use plasma to accelerate particles faster and more precisely. The laser, which runs through a mix of gases including carbon dioxide to amplify its power, provides a strong source of infrared light. Researchers use this light to study a range of interactions between electron beams and light. The combination of both capabilities allows experiments that aren't possible elsewhere.

"I view [the ATF] as one of the crown jewels in the High Energy Physics portfolio," says Palmer.

The facility took a big leap forward in 2015 when the Office of Science designated it as a DOE national user facility.

The facility conducts research to understand how to improve its performance and is continually updating its lasers and electron beam lines to enhance its capabilities for the user community. The decisions Palmer needs to juggle on a daily basis make particle physics seem simple.

"When things become super complicated, you need a guy that you can trust," says Carlsten. "People have confidence in [Palmer] because he's got a proven track record."

Palmer emphasizes the "user" in user facility. He says the most important part of his job is reliably serving the research community, whether by providing the right equipment or helping them maximize that equipment's potential. He spends much of his time listening to users so he can better understand their needs.

But his heart remains in setting up and running experiments. He says, "There's always something novel and interesting."

The ATF supports two major types of experiments: ones to develop new accelerator technologies and ones that use those technologies to collect data.

The first category is where the ATF shines the brightest. Scientists have used the ATF to invent key parts of accelerators, such as the photocathode radiofrequency gun. A tool to create high-brightness electron beams, the ATF's photocathode radiofrequency gun influenced the designs of a number of electron sources used in accelerators around the world. These include the Linac Coherent Light Source at SLAC National Accelerator Laboratory, another Office of Science user facility.

One of the ATF's recent big pushes was to test the magnets of a multi-pass accelerator that can transport particles over a range of energies using magnets with fixed fields. That range would allow scientists to build next-generation accelerators to probe even more of physics' fundamental questions. So far, researchers have developed a prototype where the highest energy is 3.5 times that of the lowest. That's leaps and bounds above previous versions. Cornell University is now using that design to build a much larger version for their energy recovery linear accelerator.

The one-of-a-kind measurements scientists take at the ATF are impressive in their own right. For example, NASA's Jet Propulsion Laboratory is using the facility's radiation sources to test how well their instruments can handle specific kinds of radiation. Checking that hardiness is essential for their mission to Europa, one of Jupiter's moons.

"Nobody else is set up to do those sorts of things," says Carlsten. Like every user facility, the ATF has its own unique niche.

Best advice for a future director of the ATF:

"The advice I would give the next director is to focus on understanding the user community so that the facility can continue to do cutting-edge science," says Palmer.

In Fiscal Year 2017, the Accelerator Test Facility and the other user facilities welcomed 34,417 researchers – from academic, industry, and government laboratories in all 50 states and the District of Columbia – to perform new scientific research. For details on the DOE Office of Science User Facilities, go to https://science.energy.gov/user-facilities/.

Please go to Profiles of User Facilities Directors to read more articles on the directors for the Office of Science user facilities.

The Office of Science is the single largest supporter of basic research in the physical sciences in the United States and is working to address some of the most pressing challenges of our time. For more information please visit https://science.energy.gov.