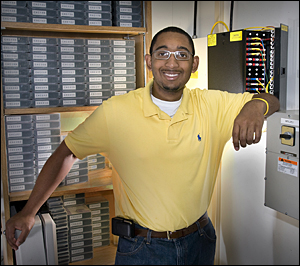 With summer students working on exciting science ranging from nano to neuro, it might be easy to overlook those interns whose work, while equally important, is somewhat less visible. Patrick Bynum is one such student. His efforts in the Collider-Accelerator Department (C-AD) for the past two summers have been crucial in ensuring the smooth operation of the Lab’s technical infrastructure, and he has recently been recognized for his valuable contributions, being named a recipient of a 2009 BNL Spotlight Award.

Humble and soft-spoken, Bynum has been somewhat surprised by the honor, normally only given to permanent BNL employees.

“I’m not sure that my work is that big of a deal,” he said, adding, “but my mentor tells me that it will help to organize the whole Lab and make it safer.” Bynum’s mentor, C-AD engineer Nicholas Franco, has a point. The intrepid intern’s main project this summer has to do with documenting a large network of fiber-optic cables, some of which are responsible for communicating alerts to the Fire Department. Keeping track of these cables could well be instrumental in saving lives in the event of an emergency.

This important project is only the most recent addition to a long list of impressive work the student has done at BNL. Bynum first came to the Lab in the summer of 2008 after his mother, engineer Patrice Greenwood, moved to the area to assume the role of Configuration Manager for the National Synchrotron Light Source II project. Franco hired him through a Diversity Office program. Although he’s actually majoring in business at Alabama A&M, Bynum found working with computer technology to be a natural fit.

“I have always been interested in engineering,” he said. “I watched automotive engineering leave my home town [in Indiana], but a calculus professor suggested that I look into computer science instead.”

Of course, business classes do not necessarily teach the skills necessary for information technology work, but Bynum has had a great deal of “real-world” preparation.

“Growing up with my mom and sisters, if anything was broken, I always fixed it,” he recalled.

Bynum learned everything else he needed to know on the job. He surpassed all expectations last summer, creating databases of computer registration information and facilitating essential encryption security upgrades for mobile computers. He even completed the difficult task of restoring obsolete design-data tapes and transferring their contents to a modern hard drive. Considering these accomplishments, it is easy to see why Franco requested Bynum’s return this summer.

In terms of his future, Bynum hopes to attend graduate school to prepare for a career in a field such as business administration or database management. If his stellar work so far is any indication, future employers will have, in Franco’s words, “the honor” of working with him as well.