The last day of June marked the culmination of almost four years of research and engineering design in the development of the magnet girder assembly for NSLS-II. On that day, NSLS-II staff conducted a preliminary test of one of the project’s critical design issues -- to determine how closely the magnets would stay aligned when they are moved from their assembly point to the NSLS-II tunnel. Two weeks later, the results were in, and confirmed that the magnets’ high-precision alignment would survive the process of transporting and installing and fixing the girders to the ground in the tunnel.

During the experiment, the magnetic centers of the magnets were aligned inside the environmental room to within a few microns. The team then extracted magnets from the room, put them onto a truck that traveled around the site, then returned the magnets to Building 902. The team then reassembled the magnets in position and measured how far they moved out of alignment. 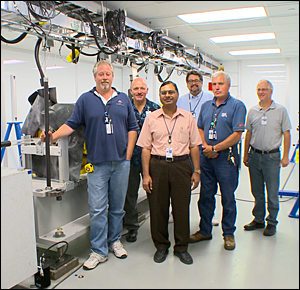 Members of the magnet team gathered in the clean room in the Building 902 annex after the experiment. Pictured are, left to right, Roger Hubbard, Raymond Ceruti, Animesh Jain, John Skaritka, Francis Karl, and Charles Spataro. Not pictured but very much part of the event were John Cintorino, Thomas Dilgen, Piyush Joshi, Jim O'Malley, and Andrew Sauerwald.

As hoped and predicted by the team, the magnets stayed very closely aligned.

“We were fairly confident that the magnets would stay aligned within about + or – 10 microns,” said John Skaritka of the NSLS-II project team. “But it’s exciting to get the exact measurements and confirm that our process will be successful.”

Unlike those of almost any other accelerator built in the world today, NSLS-II magnets have extremely tight alignment tolerances that must be met. The magnetic fields centered inside these magnets must be co-axial, with a common axis within 30 microns. Experimental girders – early versions of what will go in the NSLS-II tunnel -- were built in Building 902 and were developed and tooled to see how well the magnetic centers of the magnets can be maintained on this common axis. A special technique invented at Cornell University was advanced and used to align the magnetic centers of each of the magnets within a few microns, quite a feat in itself.

Following confirmation of the test results, a celebratory luncheon was held for the entire team on the experimental floor where all their hard work took place and culminated in such a grand success.

Ferdinand Willeke, head of the Accelerator Systems Division, congratulated the team on their success and said, “We accomplished quite a piece of accelerator R&D which will not only be important for NSLS-II, but will be an advance for the entire field.”

The project team lowers the girder with magnets attached onto a flatbed truck for its trip around the Lab site.