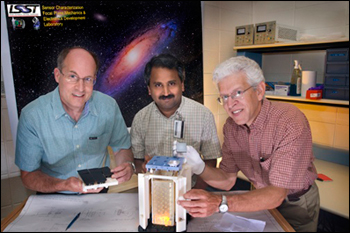 Stephen Plate (left) of the Superconducting Magnet Division, with Anand Kandasamy (center) and Paul O’Connor, both of the Instrumentation Division, examine the operation of a prototype kinematic mount for the LSST sensors.

Dark energy and dark matter — the mysterious “elephants in the sky” that many physicists are seeking — fascinate everyone. The known forms of energy and matter occupy about four percent of the universe, but what about the dark 96 percent? To learn more, an instrument is currently being planned for construction high on a mountain top north of Santiago, Chile: the Large Synoptic Survey Telescope (LSST), which will take pictures of the sky using a gigantic camera within a ground-based telescope.

The LSST, expected to start work in 2016, will be the world’s largest, most powerful wide-angle survey telescope, providing time-lapse digital imaging across the entire available night sky every three days. With its 8.4-meter (27.5 foot) diameter primary mirror, 3.5-degree field of view, and 15-second exposure time, the LSST in its first week of operation will survey a volume of the universe larger than all previous telescopes combined. Over the course of its 10-year survey, the LSST will capture images of over five billion distant galaxies. These images will contain the imprint of invisible dark matter whose gravitational pull subtly bends the light on its journey to the telescope. This will allow scientists for the first time to construct a large-scale, three-dimensional map of the dark matter in the universe. And since this map contains information on the evolution of cosmic structure through time, it will reveal the influence of dark energy’s enigmatic repulsive force with greater precision than current techniques. 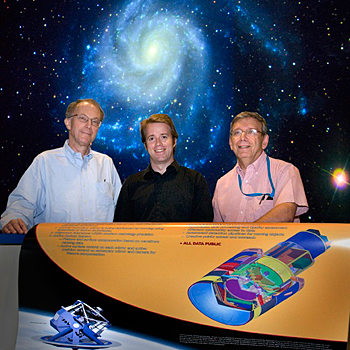 Shown against an image of the Pinwheel galaxy in Ursa Major are (from left) Morgan May, Erin Sheldon, and James Frank of the Physics Department, who are working on research plans for the Large Synoptic Survey Telescope, seen in an artist’s impression in the poster in the foreground.

With its rapid imaging cadence LSST will also detect objects that change or move on timescales from seconds to decades, thus opening a new window to explore dynamic astronophysical phenomena. Each patch of the sky will be re-photographed 1,000 times during the course of the survey; by looking so frequently at the entire sky for changes, LSST will be thousands of times more capable of discovering exploding supernovae and potentially hazardous asteroids than current surveys.

BNL’s Instrumentation Role in the LSST

Brookhaven has the lead role in developing the “film” for this camera, which is composed of electronic sensors — just as in a digital camera — but hundreds of times larger and sensitive to near-ultraviolet and infrared as well as visible light. These sensors, which will provide more than three gigapixels of resolution when complete (more than 500 times the amount of information captured by a conventional digital camera), are the focus of a group led by Paul O’Connor, along with Veljko Radeka, Peter Takacs and Ivan Kotov of the Instrumentation Division and Stephen Plate of the Superconducting Magnet Division. The team is experimenting with a new generation of charge-coupled devices (CCD) having greater sensitivity, better resolution, and faster readout time than those used in today’s astronomical cameras.

“We assemble the CCDs, which each measure just 42 square millimeters, into ‘rafts’ made of nine sensors,” explained Takacs. “Each sensor must be adjusted to form a flat mosaic in the camera’s focal plane.”

“Precision is key here,” said O’Connor. “There are more than 200 CCDs and they must lie almost perfectly flat, with no more than a 10-micron [ten millionths of a meter] tilt in any direction. What’s more, this alignment must be maintained as the camera is cooled to -100 degrees C where it has the best sensitivity. It’s quite a challenge.” 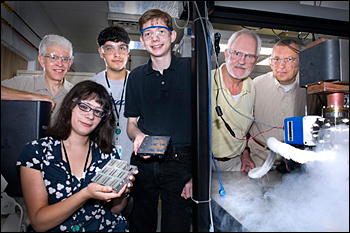 Holding prototypes of a precision optical bench being developed by the Instrumentation Division team for the Large Synoptic Survey Telescope are interns Justine Haupt and David Lawrence, with team leader Paul O’Connor (left) and intern Sachin Sharma (third from left). Team members (from right) Ivan Kotov and Peter Takacs are monitoring a cryostat holding the charge-coupled device being tested.

Once the team has perfected the techniques for aligning and testing the sensor “rafts”, they will assemble them along with a compact electronics package into 144-Megapixel modules that are the building blocks for the LSST camera. These sensor units will be integrated together with lenses, filters, and cryosystems from collaborating institutions to form the complete camera, which will undergo exhaustive testing before being shipped to the telescope site in Chile.

BNL Plans Research for the LSST

In addition to developing instrumentation for the LSST, Brookhaven scientists are key participants in another area — the scientific research plans. The Physics Department’s LSST team, which includes Morgan May, Jim Frank and Erin Sheldon, is involved in planning for LSST through sensor development, calculations and simulations. Since last September, data from other telescopes have been available to help with the plans. May explained that BNL now has an active role in two surveys using telescopes that are precursors to LSST: the Dark Energy Survey (DES) and the Baryon Oscillation Spectroscopic Survey, known as BOSS.

“Both DES and LSST use techniques based on Einstein’s theory of general relativity, which gave us our present understanding of gravity, to allow us to “see” dark matter and dark energy,” said May. “There is great excitement in the Physics Department about the astrophysics initiative. In addition to those doing astrophysics research, many who have day jobs in other fields of physics are interested, learning and contributing by attending seminars and through an astrophysics discussion group.”

For more information, go to www.lsst.org.