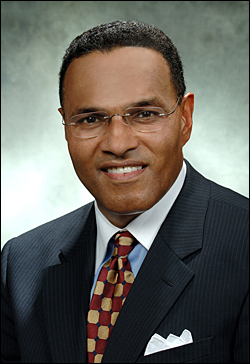 Freeman A. Hrabowski, III, President of the University of Maryland, Baltimore County (UMBC)

Freeman A. Hrabowski, III, President of the University of Maryland, Baltimore County (UMBC), will give a talk on “Beating the Odds: Preparing Students from All Backgrounds for Research Careers in Science & Engineering,” on Thursday, September 3, at 10 a.m. in Berkner Hall. All the Lab community is encouraged to attend this talk, which is also open to the public. Visitors to the Lab 16 and older must carry a photo ID.

Hrabowski will discuss his research on minority achievement, focusing special attention on the UMBC experience and his research on the Meyerhoff Program’s effectiveness and institutional best practices.

Hrabowski’s honors include being named a Fellow of the American Association for the Advancement of Science and being elected to the American Academy of Arts & Sciences and the American Philosophical Society. He was named one of America’s Best Leaders by U.S. News & World Report in 2008 and received the McGraw Prize in Education, the U.S. Presidential Award for Excellence in Science, Mathematics, and Engineering Mentoring; and the Columbia University Teachers College Medal for Distinguished Service. He was named Marylander of the Year by the editors of the Baltimore Sun and was listed among Fast Company magazine’s first Fast 50 Champions of Innovation in business and technology.

In addition to authoring numerous articles, Hrabowski has coauthored two books, Beating the Odds and Overcoming the Odds (Oxford University Press), which focus on parenting and high-achieving African Americans in science. Both books are used by universities, school systems, and community groups around the country.

Born in 1950 in Birmingham, Alabama, Hrabowski graduated at 19 from Hampton Institute with highest honors in mathematics. At the University of Illinois at Urbana-Champaign, he earned his M.A. in mathematics, and four years later at age 24, his Ph.D. in higher education administration and statistics.